After six consecutive months of gains the Dodge Momentum Index declined in April, but remains 16.7% above its year-ago level 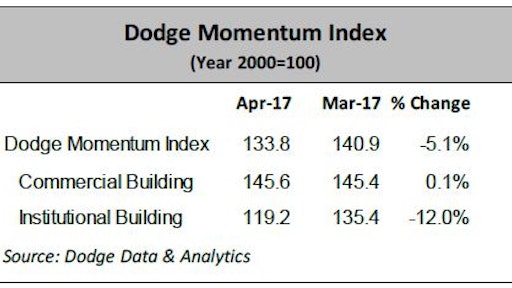 Since early 2016, the Momentum Index has gained substantial ground, albeit in a saw-tooth pattern, increasing by over 20% through March this year. Despite April’s decline, the broad upward trend for the Momentum Index remains present, suggesting that construction activity still has further room to grow in 2017. The planning data’s strengthening over the past year stands in stark contrast to the 2014-2015 period, when the Momentum Index saw little improvement, gaining just 4.0% in that 24-month span.

"Despite April’s setback, we expect private nonresidential outlays to continue to grow this year, but at a slower pace as commercial activity moderates," according to the Wells Fargo Economics Group's analysis of the April Momentum Index.

In April, six projects entered planning each with a value that exceeded $100 million. For the commercial building sector, the leading projects were a $275 million commercial building project in Brooklyn NY and the $110 million Optimus Logistics Center in Perris CA. The leading institutional projects were the $200 million Kennedy Health Patient Tower in Turnersville NJ and the $110 million Highline High School replacement in Burien WA.