ABC: Modest Recovery for Nonresidential in 2013

Associated Builders & Contractors forecasts a 5.2% expansion for nonresidential construction in 2013 thanks largely to sectors dependent on private funds 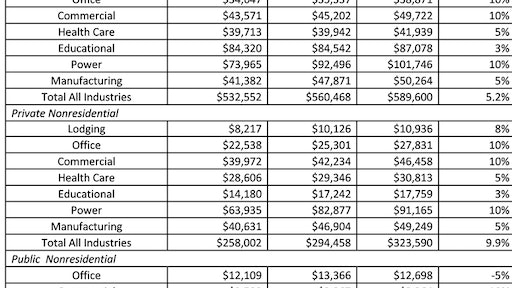 ABC Chief Economist Anirban Basu says, "Thanks to a handful of segments experiencing more rapid economic recovery, much of the construction expansion next year will be in categories heavily associated with private financing."

Associated Builders and Contractors (ABC) released its 2013 economic forecast for the U.S. commercial and industrial construction industry, and it shows the continuation of a modest recovery for nonresidential construction next year.

“Thanks to a handful of segments experiencing more rapid economic recovery, much of the construction expansion next year will be in categories heavily associated with private financing,” Basu said. “Due largely to constrained capital budgets at state and local government levels, as well as ongoing turmoil in Washington, D.C., publicly funded construction spending is expected to be flat next year, and perhaps worse.

“The fastest growing major U.S. industry during the last year in terms of absolute job creation was professional and business services,” said Basu. Because many firms in this category use office space, office-related construction spending is expected to rise 10 percent in 2013.

“Nonresidential building construction employment is expected to expand 2.1 percent in 2013, slightly better than the 1 percent performance estimated for 2012,” said Basu. “Construction materials prices should rise a bit more rapidly in 2013 than they did in 2012, with substantially more volatility to be experienced from month to month next year.

“Despite ongoing slowdown in many of the world’s largest economies, ABC anticipates many investors will opt to invest in hard assets as a way to avoid volatility in equity and bond markets,” Basu said.

“Whether or not the nation falls off its fiscal cliff - a collection of spending cuts and tax increases that kick in at the end of the year - certain taxes likely are headed higher,” said Basu. “ABC predicts higher marginal income tax rates to reach pre-Bush levels, as well as an increase in tax rates on capital gains and dividend income. In addition, ABC expects the payroll tax credit to sunset in the first quarter of 2013.

“The U.S. economy is presently expanding at a 2 percent rate,” said Basu. “Even in the absence of a dive off the federal precipice, the nation will struggle to achieve 2 percent growth next year as certain tax rates rise and as federal spending growth slows and perhaps turns sharply negative.

“Gross domestic product (GDP) has expanded for 13 consecutive quarters, which has reduced vacancy rates in certain segments and in key metropolitan areas,” Basu said. “ABC’s forecast for GDP growth next year is between 1 and 2 percent. If the nation falls off its fiscal cliff, recession will follow, with GDP falling between 2 and 3 percent for the year.

“With the elections now behind us, the hope is the White House and Congress will be able to successfully navigate the nation past its fiscal cliff,” Basu said. “If that happens, the latter half of 2013 could be surprisingly good for nonresidential activity given the large volume of construction projects that were put on hold during the course of 2012. However, the baseline forecast calls for only moderate expansion in nonresidential construction spending next year.”

See ABC's chart of year-to-date performance and the 2013 forecast.