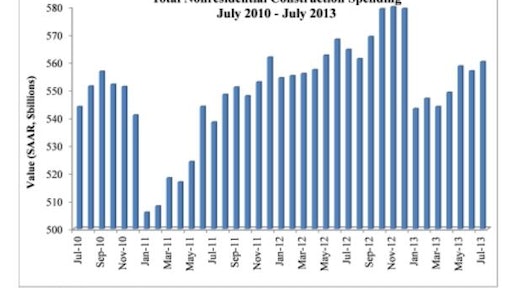 Even in the fifth year of economic expansion, the nonresidential construction sector recovery remains sporadic.

The nation’s builders were busy in July as construction spending increased 0.6 percent to $900.8 billion - the largest upswing in four years - according to the September 3 report by the U.S. Commerce Department.

Nonresidential construction spending also rose 0.6 percent in July but is down 0.8 percent compared to one year ago.

Eleven of 16 construction sectors posted monthly gains in spending. The largest gains were in:

Six subsectors experienced higher spending on a year-over-year basis, including:

In contrast, spending in five nonresidential construction sectors declined in July, including:

On a year-over-year basis, construction spending has softened in 10 subsectors. The largest losses occurred in:

Residential construction spending increased 0.5 percent for the month and is 16.8 percent higher than the same time last year.

“All of this indicates that even in the fifth year of economic expansion, recovery in the nonresidential construction sector remains sporadic,” remarked Basu. “This should come as little surprise because economic growth remains at or below 2 percent, capital remains highly constrained and a lack of confidence pervades the economic environment.

“Moreover, the impact of strained public finances continue to be felt,” Basu said. “Public nonresidential construction fell again last month and is down nearly 4 percent for the year. Given sequestration, rising interest rates and the ripple effect of Detroit’s bankruptcy, there is little prospect for any near-term improvement in public nonresidential construction even if the economy re-accelerates during the latter stages of 2013.

“Many economists continue to predict the second half of the year will be better for the broader economy, which would imply better nonresidential construction performance in 2014,” Basu added.

“However, with interest rates rising, there are reasons for contractors and other stakeholders to remain cautious,” Basu said. “Federal Reserve monetary policy is poised to shift during the next several months, and additional unexpected increases in interest rates could serve to suppress the pace of economic expansion, as well as nonresidential construction starts going forward.”