The Decorative Concrete Council (DCC) functions as an integral part of the ASCC concrete contractor membership but focuses on the specific interests for those involved in the production and installation of decorative concrete. 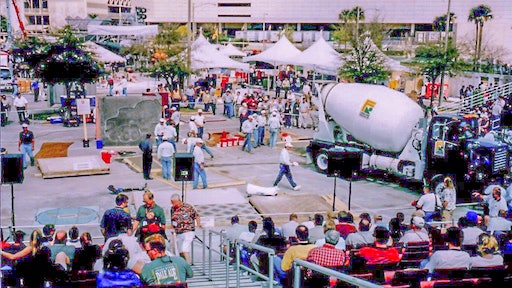 In 2000 the DCC conducted decorative concrete demos at the World of Concrete to encourage interest in this growing industry.
American Society of Concrete Contractors

Decorative concrete materials were available as early as the 1890’s in the form of recipes and project designers often included these recipes and directions for contractors when they specified decorative concrete applications. But the consistency of the results was unpredictable. Lynne Scofield changed that with the founding of his company in 1915. He manufactured color hardeners, integral colors, acid etch stains, and other products that were the same batch after batch and year after year. In 1950, using Scofield color hardeners to color concrete Brad Boman invented large aluminum stamps that could be used to provide brick and stone patterns in fresh concrete. The significance of his invention was that designers and contractors could use his process to exercise their own creativity. In an effort to maintain high quality workmanship the Bomanite Corporation was formed in 1970 to franchise the process to select contractors.

By the end of the 1970’s the Bomanite patent was successfully challenged in court and companies formed to manufacture the stamps in competition with Bomanite. Now anyone who wished could buy stamps and use the process. At the same time other decorative processes were developed (many by contractors) and the decorative concrete industry became much larger. Contractors with a creative interest were especially attracted to this new industry but many established concrete contractor businesses also added decorative to their list of other products.

In 1997 Frank Piccolo, and Wade Cobb, employees of the Artcrete Corporation, Natchitoches, La., manufacturers of paper stencils that could be used for patterning concrete, approached organizations such as the Portland Cement Association (PCA), the American Concrete Institute (ACI), and the American Society of Concrete Contractors (ASCC) with the idea of forming a decorative concrete organization. The ASCC approved the idea and the Decorative Concrete Council (DCC) was born. It would function as an integral part of their concrete contractor membership but would focus on the specific interests for those involved in the production and installation of decorative concrete. Piccolo and Cobb were concerned about the amount of shoddy workmanship being installed around the country and feared that it would cause consumers to make other choices. But they also believed that it would be valuable for members of the DCC to compare notes with each other, participate in training opportunities, and promote the industry. The ASCC Board of Directors approved the formation of the DCC in July of 1998. Peter Steiner, ACI, became the first executive director of the group and Mary Hurd wrote the first DCC newsletter. Pat Reardon became the first manager of the DCC.

DCC members included both decorative contractors and the manufacturers of decorative materials and tools serving the contractor industry. Their goals in 1999 were focused on promotion, education, and networking. In line with these goals they sent out their first multi-page newsletter, started a “Troubleshooting” publication to all members to help members understand difficult problems such as efflorescence, and persuaded the World of Concrete to schedule a decorative concrete mega demo which the DCC would conduct.

The first DCC Advisory Council was approved in June 2000 and consisted of the following people:

One of their first big accomplishments was to conduct a “Placing Decorative Concrete Flatwork” mega-demo and seminar at the World of Concrete (WOC). They demonstrated stamping, stenciling, staining and scoring, stampable overlays and micro-toppings. Frank Piccolo, Frank Lewis, and Bob Harris were the presenters.

In 2006 the DCC held its own training program,  a two day EXPO in New Orleans. It provided educational seminars on topics ranging from management to concrete issues, decorative concrete demonstrations, and ACI Flatwork Finisher Certification training and exams. The event was in response to their goal for training opportunities for training for its members. The events were called “Flings” and “Expos” and became two day spring events held in different cities. The first one was hosted by Doug Bannister’s business, The Stamp Store, in Oklahoma City. During the seven years of the program they were held in Tampa, San Diego, Columbia, SC, New Orleans, a second time in Tampa, and Phoenix. There were live demos and classroom sessions and members often helped with the placing and finishing of concrete.

After the Hurricanre Katrina devastated New Orleans in August of 2005 Piccolo urged the DCC to get involved in a project that would commemorate the event and show support for the city. Working with the city government and a local architect it was decided to restore and dedicate a small park in the downtown area to the disaster. Approximately 30 DCC members volunteered their time and money to help with the project and the event became an emotional experience for everyone. The following year the DCC held its spring training expo in New Orleans, thinking that the town needed people to visit the city and the revenue that came with it. The city held a small dedication ceremony at the park as a part of this event.

The idea of volunteering projects that helped people, groups, and worthwhile organizations resonated with DCC members over the years since ten community projects have been completed around the country and more are planned. The projects have grown in complexity and creativity over time and the goal is to contribute to the worthwhile efforts of other organizations.

The DCC is turning twenty years old this year and almost none of the people who started it in 1998 are involved anymore but Bev Garnant, the executive director of the ASCC, says that the membership of the DCC has grown to 278 members and the organization remains strong and healthy. They remain a vital part of the industry, still dedicated to the goals set out in 1998.