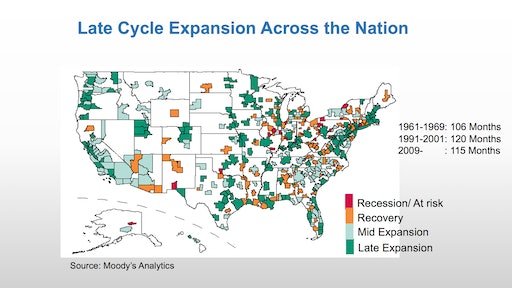 Although the U.S. economy is doing well, economic well-being is more regional than national. The map shows how different regions are doing right now.
Moody’s Analytical

Portland cement is considered to be a commodity so both the federal government and Wall Street incorporate portland cement consumption numbers in their economic forecasts. The amount of cement consumed correlates with the size of the construction industry. The Portland Cement Association (PCA) based in Skokie, Illinois, generates economic reports about cement consumption that the government and Wall Street use. Ed Sullivan, the PCA’s senior vice president and chief economist is the person tasked with producing these reports and his predictions have been very accurate over the years.

Sullivan says there are three primary influences on our economy; the federal government, Wall Street, and “Main Street.” He says there are too many uncertainties about what the direction the government might take to be able to predict the future right now. Wall Street has uncertainties too and predicting what they might do is also risky. It’s Main Street that is in good shape with high consumer confidence and this is the basis for the PCA’s most recent economic projection. Here is what’s happening in this sector.

On Main Street the economy is doing well and consumer confidence continues to rise.

With the good news there are concerns about what lies ahead too. The national debt is currently increasing at the rate of $1 trillion per year. Labor shortages are increasing in the construction industry and elsewhere. Housing affordability is deteriorating due to rising interest rates and costs. At the state level entitlement spending continues to increase due to our aging population, resulting in less state spending for construction (tax revenues aren’t covering state obligations). The international tariff war is taking a toll on U.S. business in the form of decreased sales and a growing uncertainty.

There is also a growing feeling that the country is overdue for another recession because the growth period has gone on much longer than expected. However Sullivan doesn’t think we will see a recession in 2019 and probably not in 2020 either.

Here is what to expect in each of the primary construction markets: residential, non-residential, and public.

Until now low interest rates have stimulated the housing market by making houses affordable but that is beginning to change. Sullivan believes rates will eventually rise to about 6.5% and that will dampen the residential construction market. By 2021 mortgage monthly payments are expected to increase by 35% and the combination will result in fewer homes being built.

The PCA report expects non-residential construction at the national level to grow at a modest rate and states with the strongest economies will benefit the most. The 2019 year will mark the lowest point for non-residential, rising steadily until 2021.

Construction in this sector is very dependent on the finances of each state. Revenue versus spending is the key but last year states collectively added $15 billion dollars to their debt. The biggest threat to construction growth is the growth in Medicare and Medicaid spending in each state due to our aging population.

Spending for transportation—roads and bridges—is a key construction market but it is expected to struggle to achieve growth through 2020.

Increasing fuel taxes could be a way to help fund infrastructure construction but congress has been unwilling to add any new taxes. The last federal tax on fuel was in 1993 while each state regulates its fuel tax rates differently.

Increasing fuel taxes would be a step towards funding infrastructure projects. Adding a 15 cent tax on gas and diesel fuel would generate $28.2 billion in revenue. A 25 cent increase would translate to $47.1 billion and if there was a 1 cent Vehicle Miles Traveled (VMT) tax $31 billion could be raised—as battery powered vehicles increasingly enter the market this would be a way to include them in infrastructure taxes.

Labor shortages first started to appear in 2010 and by 2018 an additional 7.2 million workers were needed. By 2022 another 8.5 million will be needed. The shortage is affecting company bottom lines and is beginning to impact U.S. construction revenues as a whole. The shortages are regional at this point and have more impact on larger population centers. The question is what to do?

For several years’ immigrant labor, legal and illegal, has worked in the construction industry and helped to fill labor shortages, especially Mexican labor. They worked in all trades as both union and non-union workers. Union workers earned higher wages, the same as other union workers. Taken as a whole immigrant workers have been enthusiastic, had a strong desire to learn, and were hard workers and contractors appreciated them. But they were also resented because some believed they were taking jobs away from U.S. citizens, especially through the recession years starting around 2008. With fewer jobs available labor began to return to their countries of origin.

The U.S. construction industry is facing an unusual situation now. Unemployment is down to approximately 4%, government statistics month after month report increased numbers of jobs being created, and contractors are noting labor shortages in every trade. The consequences of this are being felt regionally to varying degrees depending on the region:

There are many reasons for the labor scarcity:

The question of where to find good construction labor is difficult. Construction technology advances require a smarter work force. Some in the construction industry think workers in factory settings can be influenced to leave their jobs for better paid construction positions. It is also inevitable that contractors will try to hire workers away from other contractors at a higher rate of pay but that doesn’t increase the labor pool. One contractor has been working to keep track of the available labor pool so they can reach out to them when they contract work in their area.

If the federal government passed a large infrastructure bill it could cause greater labor shortages.

Here is the bottom line for Main Street:

Clouds on the horizon: