Flooring Worthy of a Waikiki Renaissance

In Honolulu, the famous beachfront neighborhood of Waikiki is undergoing a redevelopment renaissance that promises to cut the area’s high percentage of vacant office space and add much-needed lodging and higher-end shopping. 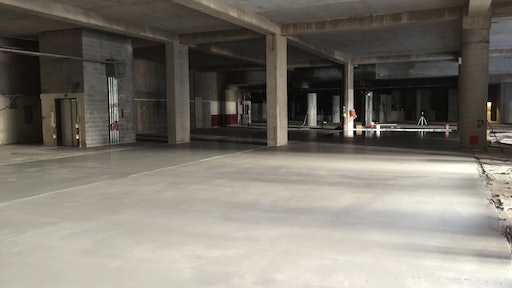 In Honolulu, the famous beachfront neighborhood of Waikiki is undergoing a redevelopment renaissance that promises to cut the area’s high percentage of vacant office space and add much-needed lodging and higher-end shopping.

As part of this renaissance, the Waikiki Trade Center—an underused 22-story office and retail building—is being transformed into an upscale, 230-room hotel by Swinerton Builders Hawaii. The hotel will include street-level retail space, and specialty fashion retailer Nordstrom Rack will be one of its first tenants.

The approximately 33,000-square-foot, two-level store opened in fall 2016, along with the hotel. In November 2015, Swinerton Builders tasked contractor Floor Technologies Hawaii to restore the space’s two levels of flooring, which was formerly used by nightclubs, to a product worthy of the on-trend Nordstrom brand.

The original flooring was an elevated, 6-inch-thick concrete slab on pan-deck. However, it was uneven and wavy, ranging from zero to 2½ inches. The project scope included applying an overlay to cap the floors and make them like new again. To do this, the floors needed a 1½-inch-deep pre-level (underlayment) and a ½-inch overlay.

The retailer also specified no control joints, but Floor Technologies Hawaii was able to convince all stakeholders of the need for control joints through education. Traditionally, a control joint is placed every 20 feet or so to release tension in concrete, thus preventing severe cracking. To further prevent cracking, the contractor also placed a thin Styrofoam material against walls and wrapped it around all columns so the concrete would not abut against vertical services when placed only to break away from those surfaces when setting. When the Styrofoam is later removed, it leaves a cove joint between the flooring and vertical service.

The floor was laser leveled, marked and set with leveling pins to gauge depth for the pre-level.

LevelFlor is an advanced hydraulic cement-based self-leveling underlayment that can be used both indoors and out. It rapidly levels, maintains workability for 30 minutes and produces a flat, strong surface with high bond strength.

To apply the underlayment, crew members set up a mixing station at the loading dock of the building and used a mixer and pumping machine with more than 250 feet of 2½-foot-diameter hose. They mixed 18 bags of LevelFlor at a time, using a Bobcat tractor with a small skip loader to dump 12 bags into the mixer while adding an additional six bags by hand. They pumped 600 bags in a three-hour time frame; the entire 33,000 square feet of flooring was installed in little more than seven hours.

They worked under very humid conditions, with the material, water, floor and ambient temperatures at 81 degrees Fahrenheit. To bring the mix water temperature to 70 degrees or less, the crew placed the water hose inside a trashcan packed with ice. They added ice cream salt to the ice water to keep the ice from melting. This temperature drop helped to maintain ideal workability of the material in such hot and humid weather.

Due to the holiday schedule, the Floor Technologies Hawaii crew returned a month later to apply the overlay. First, crew members shotblasted the surface to create a CSP of 3 to 4. Next, they applied TXP Epoxy Primer and broadcast sand to the point of refusal. A total of 88 three-gallon kits of primer were used, with the contractor covering about 375 feet per kit.

The two-component, low-VOC primer is moisture- and alkali-insensitive. When applied at 12-mils (0.3-mm) thickness, the adhesion of TXP and TRU Self Leveling will remain unaffected by moisture vapor transmission and alkalinity up to pH of 14, which is ideal for a tropical island climate.

The crew once again used a mixer and pumping machine to place the TRU topping, mixing 12 bags per batch. To create a smooth finish, they used a gauge rake with a ½-inch-depth setting and two spike rollers.

The floor was ready in January 2016

Read about reasons why concrete is a viable option for parking lot paving over asphalt.
Mackenna Moralez
April 30, 2020

Understanding the types of cracks and their causes will help you choose the best fix for the job.
Bob Harris
January 17, 2007

Preparation is the Key to Polished Overlays

In the world of concrete overlays…it’s what lies beneath that matters most.
CT “Chip” Marshall
April 23, 2019

Supporting the slogan “Celebrate our past – Enjoy our presents,” MAPEI is inviting contractors to make use of their purchases during 2017 to enter the MAPEI 80th Anniversary Giveaway.
MAPEI Corporation USA
February 1, 2017

ColorChrome Pigment is a metallic mica pigment designed to be dispersed in a variety of binders to create seamless floors with a unique, three-dimensional appearance.
Super-Krete Products
September 1, 2016

A Decorative Mix for Diamond Polishing

L. M. Scofield Company is pleased to announce the winners of our Eighth Annual Decorative Concrete Awards contest. The contest is free to enter, and is open to any contractor, architect or designer who uses or specifies Scofield Systems.
L. M. Scofield
February 9, 2016

The ARDEX Choose Your Experience Installer Sweepstakes winners have been notified that they can Choose Their Experience.
ARDEX Americas
November 6, 2015

Kingdom Products’ Top Cap is a one-component, low-build overlay engineered to develop maximum strength and attain a tenacious bond to properly prepared, cured concrete without the use of a bonding agent.
September 16, 2015

FLOOR-TOP STG from W. R. MEADOWS is a standard traffic-grade, single-component, shrinkage-compensated, self-leveling floor topping and underlayment that may be pumped or poured.
W. R. Meadows Inc.
May 14, 2015