Winter Walls - The Walls Are “Leaking”

This column presents a comparison issue between what is assumed to be faulty construction or installation and the natural hydration process combined with the change of seasons. 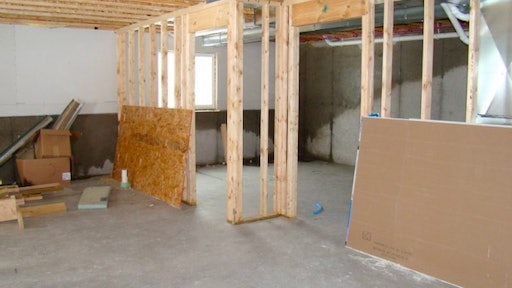 Question: Last winter we installed several foundations for a builder in one development. He called this week asking us to provide inspection and support for a home owner claiming to have moisture along the foundation walls and slab perimeter. They see wall cracks and some shrinkage cracks in the slab and are challenging that the new concrete is leaking. This builder is asking us to provide a written explanation to give to their clients or an inspection report to determine if the walls are the problem. Can you help us identify the issue?

Answer: The concrete foundation you installed this winter, like so many basements across northern climates, very likely achieved a frozen or near frozen state at some point, which is quite common. Cold weather requirements establish this cannot occur until after initial strength gain beyond 500 psi to prevent surface durability issues (ACI 332-141). When this happened, the hydration process slowed, and if truly frozen, stopped until the concrete temperature is returned to a level high enough for hydration to resume (+/- 30 degrees F).

Now spring, these walls contain significant moisture that will be consumed by this resuming hydration along with a considerable amount that will evaporate into the adjacent warming air of the confined basement spaces. Spring is also when the frost leaves the ground and rains begin to saturate the surrounding soils. The drainage systems properly installed will see an increase in water activity and sump pumps will not likely fully dry out. Here is where the problem begins.

Thousands of new foundations across a large portion of North America are constructed annually during the colder months of the year. Building demand does not slow for Old Man Winter and, in fact, builders must maintain aggressive construction schedules during these winter months to meet the growing demand of spring sales. Such aggressive schedules require foundation installation during cooler and even frozen temperature conditions. This can be ideal for developing stronger concrete as the impact of evaporation is lessened, maintaining moisture in the walls longer for the cement hydration process. However, when the concrete temperature drops low enough for the water molecules to freeze, this moisture is held at a constant, neither being consumed by hydration nor leaving the wall by evaporation.

ACI 332-14 specifies a maximum water to cementitious material ratio (w/cm) of 0.45 and as seen in Mix 3 of figure 1 (a common mix design for residential concrete walls), this means that around 20 percent of the concrete is water. We will not go through the math here but it is not uncommon for a yard of concrete to contain approximately 40 gallons of water. Each ready-mix truck carries between seven and ten yards of concrete…a lot of water.

Fast forward to the spring. Not only are the grasses and flowers waking up, the new foundation walls and the concrete can be said to be waking up as well. Even if the walls have reached full design strength, the amount of water that potentially remains within the concrete volume can be significant when considered in potential volume of gas. The waterproofed exterior of the foundation wall properly provides for long term performance and now this coating also prevents the moisture contained in the concrete from migrating into the soils and open exterior air. A fully-enclosed home has been built on top of the foundation wall, complete with floor deck sheathing or perhaps even finished flooring. The basement now exists as a super-chilled space of walls with considerable thermal mass at a relatively constant temperature along with confined air temperatures beginning to rise ever so slowly.

Warming air achieves two known constants: 1) it begins to move and 2) it begins to absorb or take on an increasing amount of moisture (Figure 2). As the temperatures rise during the day, the air begins to move slowly along the concrete walls, still fresh from the winter construction. This movement picks up some of the water vapor that begins to evaporate from the concrete while it is also continues to hydrate. During the evening, air temperatures begin to cool again and the air can no longer hold the same amount of moisture. Since the basement is closed, air is no longer moving and the colder concrete walls become the ideal location for this moisture to condense back out of the air, resulting in darkening of the walls, condensation on slicker surfaces and along the base of the foundation walls. Cracks also present or are emphasized by this gathering moisture as there is greater surface area where natural shrinkage cracking has occurred in both slabs and walls. Cracks in concrete are part of a different discussion but for the application to this discussion, the cracks are not presenting moisture into the foundation, they are receiving the moisture from the air and the naturally-evaporating walls. This is a crucial conversation to have with the prospective home owner and builder so that proper preparation and maintenance of the space can be selected.

Is any of this a problem for the home owner? It is not very likely to ever be a problem provided that means of establishing a balance between air temperature and moisture exists. The easiest solution for the builder is a short-term dehumidifier to draw the excess moisture out of the concrete. The best solution for the home owner would be for the mechanical contractor to design a heat pump system that exchanges air in the basement with air in other parts of the home to take advantage of the natural heat-sink and more constant temperature of the basement, naturally removing the moisture as well. Eventually, the concrete will achieve an equilibrium in moisture content, generally within the first full year and moisture condensation due to the concrete is no longer noticed. However, moisture can still be an issue for those homes that never resolve the lack of air movement in the basement, a problem not attributed to the concrete foundation in any way.

2  How To Read A Psychometric Chart authored by Ryan Noble, published by QWare, June 2, 2016 | blog.qwarecmms.com