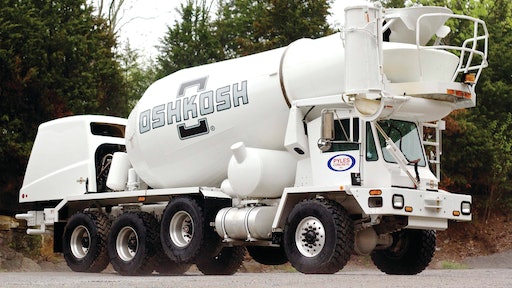 Constructing an entire barrier wall and work platform requiring nearly 300,000 cubic yards of concrete and 1,197 piles extending 275 feet into the bedrock below the foundation.

The Wolf Creek Dam Remediation project includes 1,197 piles that are each approximately four feet in diameter and extend 275 feet into bedrock below the foundation of the dam’s 4,000-foot-long embankment.

“The logistical challenges on this project were formidable, but together with the U.S. Army Corps of Engineers and very experienced contractors, we made a great team,” said Doug Pyles, president of Pyles Concrete. “We had 24 Oshkosh S-Series vehicles in our fleet during the project, and for many months the trucks were running 24 hours per day, six days a week, for four years. The S-Series vehicles were incredibly reliable; we purchased four new ones when the job began and the rest came from our existing fleet.”

In addition, concrete batch plant manufacturer, CON-E-CO (also part of the Oshkosh Commercial Group), played an important role on the project. Its LO-PRO portable batch plant was located near the site and mixed all of the concrete used at Wolf Creek Dam Remediation project.

“Lake Cumberland is the most famous feature of South Central Kentucky, so we were very proud to have been a part of this project,” Pyles said. “The stakes were pretty high, as well, with Nashville being downstream of the dam and the possibility of the dam failing before the repair work could be finished.”

Designed for high production masonry work, the new Pro20 features increased capacity for up to 20 cu. ft. of material, 6 wiper arm assemblies and hydraulic drive to reverse direction of the wiper arms
February 6, 2019

At World of Concrete 2019, Cemen Tech featured a demo of a mobile volumetric mixer, designed to enable on-site mix production and easy and accurate control of pours.
January 29, 2019

Introducing the Terex Advance Charger front discharge mixer truck with a newly designed cab to be fitted on all models in 2019.
Terex Corporation
December 20, 2018
Follow Us