Five vehicles at McNeilus booth with eight more featured throughout the show. 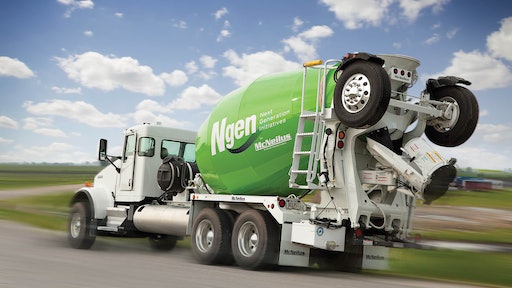 McNeilus Companies, Inc., an Oshkosh Corporation company, is displaying five mixer vehicles from the Oshkosh Commercial Group at its booth C6447 at the World of Concrete (WOC) in Las Vegas, Nevada, beginning today and running through January 24. Eight additional vehicles are showcased at the exposition, including a McNeilus Bridgemaster mixer – donated by McNeilus – on display at the Concrete Industry Management (CIM) auction stand (to support world-class academic programs and educational initiatives for the industry).

“We’re excited to have one of our largest-ever displays at North America’s premier concrete trade show. We’ve prepared a strong vehicle lineup to showcase our ability to meet the industry’s growing needs,” said Brad Nelson, Oshkosh Corporation senior vice president and president of the Commercial Group. “From the most advanced compressed natural gas (CNG) engine configurations, to a wide range of innovative front and rear discharge models, we meet the productivity, reliability, and bottom line requirements of ready-mix producers around the globe.”

The vehicle lineup at the McNeilus booth includes a pair of McNeilus Bridgemaster rear discharge mixers, one of which is on display by permission of A&A Concrete. A second Bridgemaster mixer, powered by CNG, is shown courtesy of Cemstone Companies. A McNeilus Standard mixer, shown courtesy of Cemex, is also on display.  In addition, a CNG-powered Oshkosh S-Series front discharge mixer is featured courtesy of Silvi Companies. Finally, a tandem front axle London Standard mixer will be in the booth.

Designed for high production masonry work, the new Pro20 features increased capacity for up to 20 cu. ft. of material, 6 wiper arm assemblies and hydraulic drive to reverse direction of the wiper arms
February 6, 2019
Follow Us