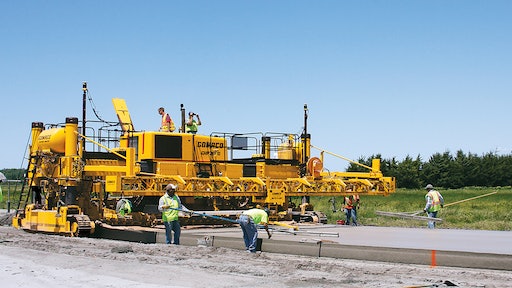 This article was originally published in GOMACO World.

Gehring Construction Company combined its GOMACO paving equipment with Topcon's Millimeter GPS paver system on a project which involved slipforming a 1.5-mile stretch of a four-lane bypass road around the city of Columbus, Neb. Gehring prepared the grade for the bypass using a GOMACO 9500 trimmer and the 3D stringless paving system. Then, the contractor brought in its GOMACO paving train, which included a 9500 concrete placer, a two-track GHP-2800 slipform paver fitted with the Topcon components and a T/C-600 texture/cure machine.

“In addition to the added speed and accuracy, another advantage of going with Topcon mmGPS was the fact that both the trimmer and the paver essentially share one single system,” said Kevin Gehring, paving superintendent for Gehring Construction. “Once both machines are set up, we can use the system on the trimmer, trim the subgrade to tolerances within 1/100 of a foot, and then move it over to the paver. There, after about a five minute switchover, we can work off the same 3D model, set the off set to reflect the thickness of the pavement and get equally impressive results on the paving.”

The concrete for the new bypass was batched from two Gehring Ready-Mix plants, both within approximately two miles of the paving site. The concrete was a standard state of Nebraska mix design with slump averaging around 1.5 inches. Twenty ready-mix trucks supplied concrete to the paver. At the paving site the trucks, mostly two at one time, emptied their 11 cubic yard loads into the 9500’s hopper in approximately two and a half minutes. The 9500’s 34.7-foot-long belt placed the concrete onto the grade and over dowel baskets set on grade at 16.5-foot intervals.

Gehring’s GHP-2800 paver slipformed the new bypass in two 28-foot-wide paving passes. The roadway is 10 inches thick with a 4-inch integral roll curb on one side of the paving. A front-mounted center bar inserter inserts tie bars every 33 inches for the longitudinal joint.

“We have an engineer come on the jobsite and give us some control points with a known elevation and a northing and an easting,” Gehring explained. “Then I’ll come in, set up my GPS base station and tie into their control points, make a control file, add that to my surface design, and then I know our elevations will match up with their print. We don’t have to have the job staked out. We have some survey points where we set up the millimeter transmitters, but that’s every 200 feet. When we set paving hubs, we’d normally have them set every 50 feet on a straight and 25 feet on a curve, so we’ve saved a lot of hubs.

“Our alignment runs off GPS coordinates, and the millimeter laser transmitters are getting the tolerances we need to pave. We have two of the Topcon millimeter laser transmitters on the jobsite, but the machine is only using one at a time. It will control both receivers on the paver and the grade check rover. In fact, just like any laser, it will control any amount of equipment within range. We have our hubs 200 feet apart, but because they’re so close to the slab and the paver we are going past the next hub 100 feet before switching, so really we’re getting 300 feet out of each transmitter. That seems to be about the maximum for concrete. Trimming is a little different story, and I don’t think it would be uncommon to get 500 feet out of a transmitter on a trimmer.”

Gehring’s switch from stringline to 3D paving has been a relatively easy one with just a few pointers learned along the way. Personnel from GOMACO’s 3D team and Topcon were on hand to help with training and offer tips and suggestions.

“There’s been a few things we needed to learn, all right,” Gehring said. “You have to make sure where you set up your millimeter transmitter is on a surveyed point so those points need to have good elevations. That way, when you switch to the next one, you don’t see any elevation difference.

“We’ve also learned there are some common factors that can create issues — like wind especially. Through Topcon’s recommendation, we learned to sandbag the tripod, and that helped to stabilize them and get all the vibration out of those laser transmitters. But as far as the GPS itself, we haven’t had any problems. Occasionally there are certain times of day when you might have less satellites than others and it will have to initialize, but that’s usually just for 30 seconds at the most. The GPS part of it has been great.”

“That’s another thing we had to get new since there’s no stringline to go off anymore,” Gehring explained. “GOMACO came up with sonic sensors, and they’ve worked perfect. Steering is referenced off one edge of the slab and grade is referenced on both sides. The sonic sensors bounce the sound beam right off the existing slab, and the T/C machine has been following it just fine. It’s a pretty simple system.”

“In the three months we were on that job, mmGPS probably helped us knock a couple of weeks off the overall project length,” Gehring added. “There is some savings in not having to go back and correct for high or low spots. However, the real impact comes from not having to stake the job or put up stringline, and the fact all of our Topcon-equipped machines are working off the same base and surface model also improves efficiency and lowers paving costs. It’s been working out really well for us.”