Without the space needed for a typical underground detention system, one N.C. contractor still needed a solution for stormwater runoff in a parking lot and found a solution with permeable interlocking concrete pavers (PICPs). 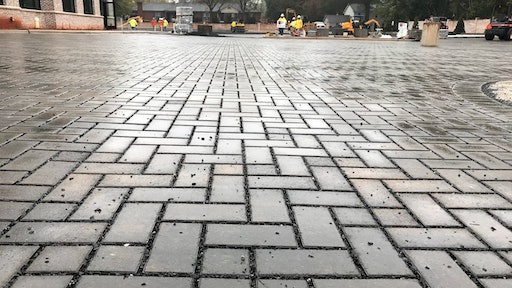 Installation took three weeks from start to finish and ran on schedule. All roof water from the building is discharged into the permeable parking lot with little or no run-off onto the neighboring property.
Belgard Commercial

Located in the expansive Novant Cotswold Medical district on Randolph Rd. in Charlotte, N.C., a new office building designed to support a variety of medical services had some special considerations for their new parking lot: stormwater runoff on a space-limited site. The design plan needed to comply with stormwater quality and storage regulations, with sensitivity to businesses on the lower side of the property, as well as a residential neighborhood behind the building.

The medical building site is a corner lot with a busy street in front, a street on one side, another business on the other lower side, and houses behind it. Because the building does not have a lot of property, the question became how to best manage stormwater runoff and meet stormwater storage requirements. MPV Properties, the developer, met with the design engineers and contractors to find the best method to manage stormwater runoff with the least impact on surrounding properties and residents.

According to Kevin Caldwell, President of GeoScience Group, a 40-person engineering and design firm, the property layout did not have the space needed for a typical underground detention system. They initially looked at a subsurface sand filter and vault system, but there was little elevation difference between the parking surface and the outfall. The vault detention system could not go very deep and would therefore not only require a larger footprint but would also increase the heights of the retaining walls surrounding the parking lot incurring increased costs.

Overall, we saved the developer over $200,000 by using a permeable paver system.
-Kevin Caldwell, president of GeoScience Group

“We were looking for a more cost-effective solution that could work just as efficiently as a large underground detention system,” says Caldwell. After conferring with Belgard’s commercial engineering team, he found the best option was to use permeable interlocking concrete pavers (PICP), although the developer was not familiar with them and was concerned about structural capacity and suitability of the surface for people accessing a medical building. “After providing a number of examples of similar projects where permeable pavers had been used, we moved ahead with the Belgard team, relying on their design and engineering knowledge of PICP systems. Overall, we saved the developer over $200,000 by using a permeable paver system.," he says.

From Concept to Design

The Cotswold district medical building was the first project for GeoScience engineers using a PICP system to meet both quantity and quality objectives for the City of Charlotte. Paul Cureton, P.E. of Belgard’s commercial engineering team provided a permeable paver concept demonstrating how the system would meet the needs of the project, and several rounds of comments and suggestions on the design plans. The resulting project has 44,000 sq. ft. of Belgard Aqualine 80 mm 4.5-in. by 9-in. permeable pavers mechanically installed in a herringbone pattern by Unit Paving of Charlotte. The color chosen was Fossil. Cureton and his team provided valuable practical guidance on how to optimize the permeable pavement design. 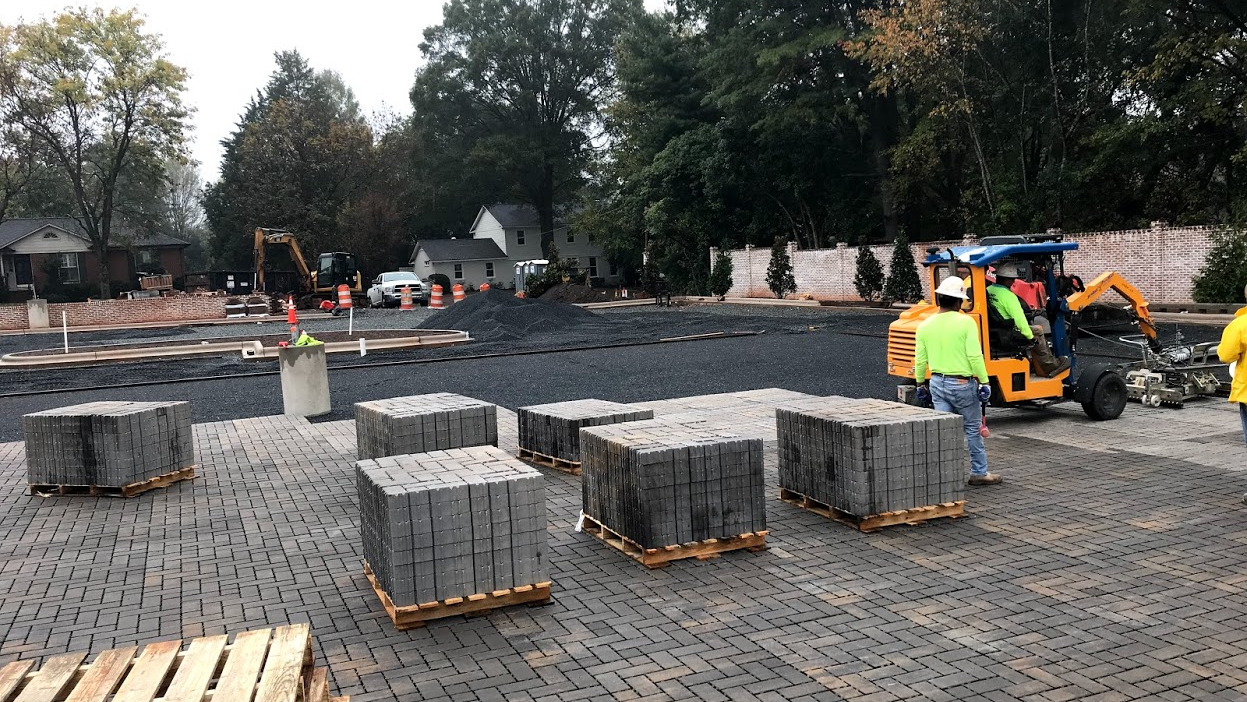 Due to limited available space, the site was unable to install a subsurface sand filter and vault system. They found a solution with permeable interlocking concrete pavers (PICP).Belgard Commercial

A typical underground detention system would require excavation of six to eight feet deep with catch basins and storm drains on the low end of it, according to Caldwell, with the water piped into the system. “From a design perspective, the parking lot slopes from one side to another and drops about 3 ft. on the low side, then you have 24 inches of stone and an overlay of asphalt. But if you don’t slope it properly, it can be like a bathtub.”

Cureton concurs that PICP is a low-impact, green infrastructure solution that can also provide significant savings over the cost of underground treatment and detention systems. “Eliminating the cost of underground systems and the associated collection and conveyance system of inlets and pipes are a huge driver for using PICP systems,” he says.

How the System Works

The system’s ingenuity starts when water infiltrates through the paver surface. That’s where the required water treatment occurs as it filters through the aggregate between the pavers meeting the requirements for a primary Stormwater Control Measure (SCM) in North Carolina. Storage is then provided in the void space in the open-graded aggregate layers. The void space between the individual rocks and the thickness of the stone layer is the key to providing sufficient storage, slowing and protecting the downstream properties from increased peak flows. “Post-development release rates and pre-development have to equal out–the peak flows can’t be increased,” says Caldwell. “In fact, PICP systems’ release rates may even be even less than pre-development rates, with some soil infiltration.”

Watch this demo of the pavers from Oak Creek City Hall, Wisc., May 2017

The storage element of the PICP system is also what Caldwell describes as a series of cells formed by subsurface flow dams or baffles made of strips of a vertically oriented impermeable liner. The flow dams maximize the available storage in the open-graded aggregate layers. The cell is multi-stage using a small hole (orifice) in the center of the baffle for low flows and the top of the baffle as a weir for larger flows. The cells act as separate storage units with water flowing downhill, one to the next, to manage the rate of flow. In a rare event storm, it will go over the top, however, Caldwell designed it so that it has enough storage to drain slowly from one to the other, finally discharging what is stored.

Caldwell says the water detained is about the same for both systems, but the PICP system is controlled by an outlet control structure based on the volume of the storm: in small storms, a small amount is released and the rest is stored; in bigger storms, more water can be discharged. Acceptable pre-and post-development release rates are determined based on an area’s runoff potential before and after development, and in this case, the site could not increase runoff for the 10- and 25-year design storms. 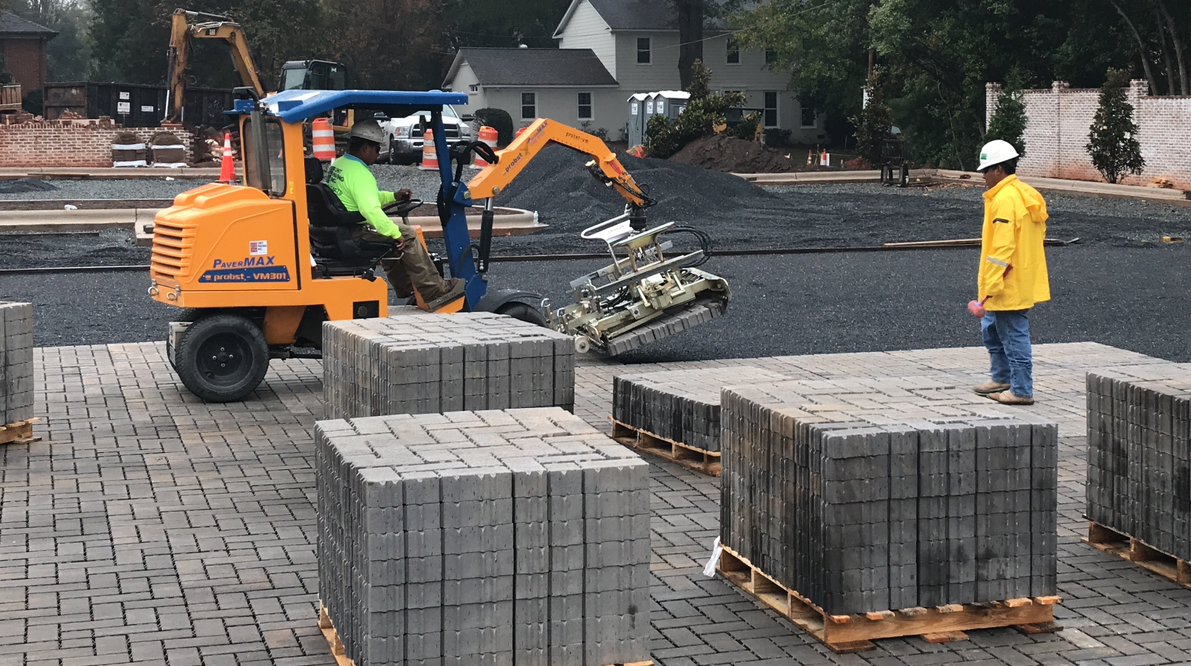 In addition, the PICP system performs a dual role providing both detention and water quality. The underground detention system required an expensive sand filter to meet the water quality requirements. For permeable paver systems, the stormwater is filtered at the surface, and sediment is removed and collected in the aggregate-filled joints, which is why permeable paver systems are easy and inexpensive to maintain. The joint material can then be vacuumed out and replaced to restore the system. Conveyance of stormwater occurs through the voids in the stone eliminating the need for most of the piping associated with conventional stormwater systems. “There is no need for additional water treatment with PICP,” says Caldwell. “A bonus of the paver system is a nicer look, with a more upscale aesthetic that holds up very well to harsh conditions.”

The end result is a nicer-looking parking lot that saved the developer significantly over a detention system in time, labor, and costs.

Once the excavation and PICP bedding layers and stone were installed for the parking lot by Unit Paving of Charlotte, the crew began to lay the 44,000 sq. ft. of Belgard Aqualine pavers. Scott Michaud, the owner, says his crew mechanically laid the pavers with a Probst PaverMAX VM-301 machine. “The Aqualine pavers have the consistency and reliability we look for in a project this size,” says Michaud. “The aesthetics are achieved at less cost and it lends a more upscale look to the entire property.  We also had great support from Belgard’s engineering team.

“This was our first mechanically installed parking lot in the Charlotte area,” notes Michaud, “which not only saved time, it saved strain on the crew, as well.” He adds that the PaverMax works very well with Belgard’s Aqualine pavers. “I also like the color consistency of Aqualine. “We were there for three weeks from start to finish, the installation was on schedule–we always look to improve timing and also finish the job in the time allotted.”

As a good community member in a neighborhood area, you don’t want to disrupt things and have water on adjacent properties,” says Michaud. “On this parking lot project, all roof water off of the building is discharged into the permeable parking lot with little or no run-off onto the neighboring property. 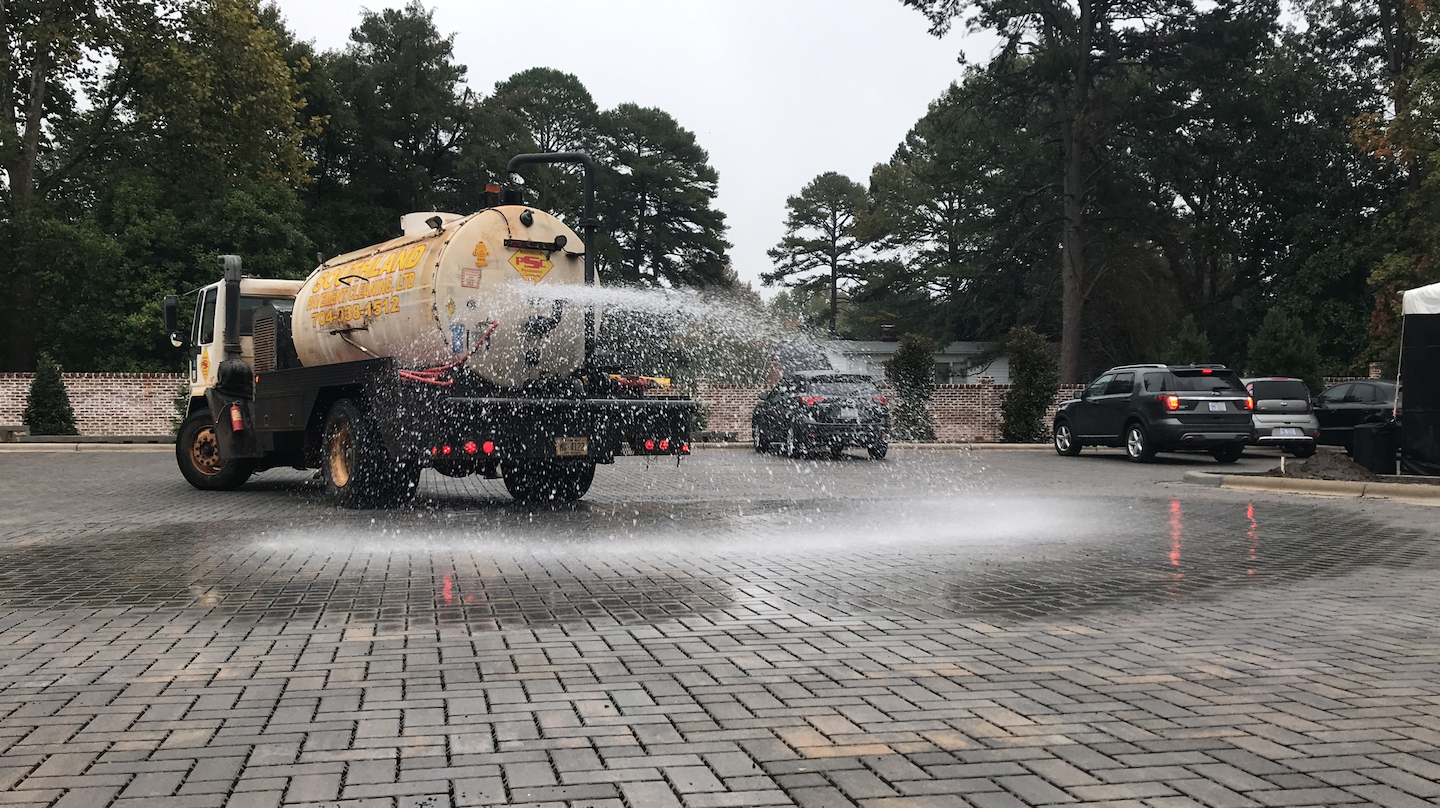 “Unit Paving set up a demonstration at the site and invited area developers, municipal officials, landscape architects, and engineers to see the permeable system in action. It was a big deal for us because it is the first large commercial permeable paver parking lot in Charlotte,” says Cureton.

As the interior work and outer landscaping finished up, the building has been readied for the new tenants. The end result is a nicer-looking parking lot that saved the developer significantly over a detention system in time, labor, and costs. “We had five inches of rain and passed the infiltration tests with flying colors—there was nothing leaving the discharge pipe,” says Caldwell. “This is the first permeable paver parking lot in the area and the developer is thrilled. He plans to use PICP for all future developed properties and parking lots.”

Pervious Concrete: How to Properly Place and Cure