Putzmeister America, Inc., (Putzmeister) launched the VSP 60HP and showcased it for the first time at ConExpo. 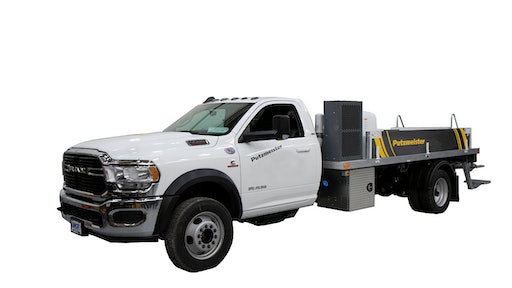 Earlier this year, Putzmeister America, Inc., (Putzmeister) launched the VSP 60HP and showcased it for the first time at ConExpo in Las Vegas. The machine was well-received since many customers requested an additional pressure model in the line after the flagship model (VSP 70) launched in 2019.

Like the VSP 70, the VSP 60HP Vehicle Mounted Pump doesn’t require a CDL to operate, which means more versatility for operators. The pump delivers a high-level performance and output on a rugged flatbed-style chassis. The VSP 60HP is well suited for pumping grout, block fill, and shotcrete applications due to its ø6 in. (150 mm) concrete cylinders.

Putzmeister recently launched the next in class, VSP 50.

“The VSP50 is a best-in class option for line pumping," says Justin Fagan, director of product management at Putzmeister America, “We listened to our customers' feedback and extended our VSP line with a pump kit that will improve performance with certain material types. The foldable side panels and a clean spacious deck meets a variety of storage and job site requirements. The VSP series is a game changer in the line pumping market.”

Coming at World of Concrete 2021 and available for sale starting in January, Putzmeister will be launching the next planned piece of the vehicle-series line, the VSP 80. This model will replace the VSP 70, with a calculated output 79 yd3/hr.

“The VSP series is a game changer in the line pumping market,” says Todd Lutz, COO at Putzmeister America. “The vehicle series is the perfect complement to the city pump because it requires no CDL to drive it, offering an unrestricted product portfolio for a major part of the industry.”