Penetron Admix was added to ensure that any cracks that formed would self-heal. 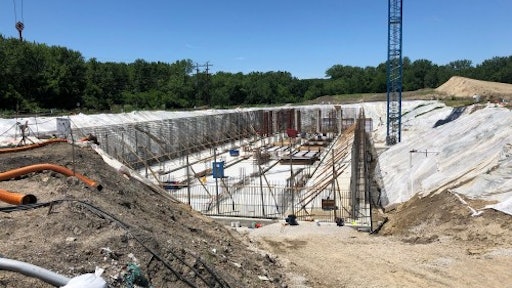 The Greenbush CSO storage tank is about the size of an NFL football field, with 3-ft. thick walls.

The decision to incorporate Peneteron Admix into the concrete of a gigantic wastewater overflow tank in Indiana proved not only successful but has been deemed award-worthy.

After construction was completed and certified in April 2019, the project was awarded the IRMCA 2019 Award as an example of innovative engineering and project management. The IRMCA Award was established by the Indiana Ready Mixed Concrete Association to recognize outstanding leadership and innovation in the ready mixed concrete industry in Indiana.

Prior to the Clean Water Act, municipal sewer systems in the U.S. were designed to collect rainwater runoff, domestic sewage and industrial wastewater—all in the same pipe. During rainstorms, the sewer systems would transport the combined wastewater directly to the wastewater treatment plant. These spikes in run-off often led to unwanted overflows during heavy storms.

"The storm overflows in Lafayette, combined with the raw sewage, would normally end up in the Wabash River," says Christopher Chen, director of The Penetron Group. "With the newly completed Greenbush facility, this overflow is now directed to the CSO tank during heavy rainstorms, where it is stored. Once the town's collection system catches up, the overflow is pumped back into the system and sent to the Lafayette Waste Water Treatment Plant (WWTP), where the plant can now treat the wastewater. This will help to markedly improve the water quality of the Wabash River."

Extensive concrete mix design testing was carried out prior to construction by project coordinator Bowen Engineering and building materials supplier IMI. The tests resulted in an optimal mix design to ensure the specified air content, slump and workability that the finishing crews needed.

"Penetron has worked closely with Bowen Engineering and IMI on a number of similar wastewater projects in which the concrete mix properties and waterproofing performance parameters consistently met the project specifications," notes Chen. "In the Greenbush project,   Penetron Admix was integrated into the mix to ensure that any cracks that formed in the structure would be self-healed and sealed to maintain the integrity and functionality of the structure."

In addition to the enormous slab and deck of the Greenbush CSO structure, the project consisted of poured walls, columns, a junction structure, and a building on the site that controls the electrical components of the storage tank. The slab and deck were poured in approximately 700 cu. yd. pours and required a speedy 200 cu. yd. of concrete to be delivered each hour to feed the two on-site concrete pumps that were placing the concrete. IMI project managers carefully planned the pour to allow the use of over 20 concrete mixers from two concrete plants to facilitate pours around the clock. This schedule enabled Bowen Engineering to reach their desired production rates and keep to the tight construction schedule.

Ultimately, close to 10,000 cu. yd. (7,645 m3) of concrete for the water containment structures were treated with Penetron Admix.

The Armor SX5000 is a solvent-based Silane Siloxane water repellent sealer that penetrates deep into the surface where it chemically reacts to form a hydrophobic barrier within the pores
Foundation Armor
April 7, 2017
Follow Us