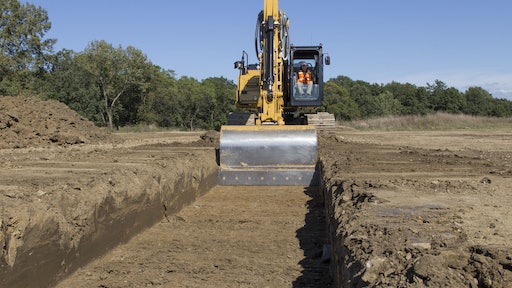 Caterpillar estimates its new Grade With Assist feature, that automates bucket and stick functions to follow a preset grade without need for operator control, can help an excavator operator hit grade targets 45% faster than machines without digital assist.

Scott Hagemann, Caterpillar application specialist for machine control and guidance, believes contractors should no more use excavators without GPS grade control on a site where dozers or graders are getting computer guidance than live in a house where one of the bathrooms doesn’t have running water.

Even if you don’t agree that excavators need a computerized grade reference as much as bathrooms need plumbing, now’s a good time to check out grade-control options for excavators as an increasing number of contractors are bidding work using digital grading aids.

Caterpillar demonstrated that its grade-indicate technology can improve a competent excavator operator’s productivity as much as 35%, and Komatsu claims its PC210 intelligent excavator – with grade-control technology that actually automates parts of the digging process to prevent over-excavating – reduces construction time as much as 63%.

Last week, Caterpillar introduced its own automation option – Grade with Assist, initially available on the 323F excavator –that should deliver productivity advantages similar to Komatsu’s PC210LCi-10. The earthmover manufacturers are motivated by early adopting contractors’ appetite for digital grade-control assistance, and their technologies are motivating other contractors to deploy these technologies. The dynamic creates a short-lived opportunity to get ahead of the technology shift before your competitors do.

Why is excavator GPS use increasing now? Hagemann cites two reasons. “First, if you’re using excavators on jobs where your tractors and motor graders use GPS grade control, you’re wasting a lot of time and money pounding grade stakes just for the excavators,” he says.

For example, a dozer/motor grader system allows the operator to build a single-point design right in the cab. Place the machine’s blade on a desired grade, hit a button, and the system guides you to grade flat in all directions from that point. It’s decent functionality for excavators that dig a lot of basements and footings, but you don’t need a $60,000 grade control system to get help digging a flat plane with an excavator. A $200 laser receiver magnetically mounted to the stick can do that job.

Caterpillar has been refining excavator-specific functionality in its Accugrade Dual GNSS system. The three-dimensional grade technology relies on GPS signals to fix the excavator’s latitude, longitude and elevation on site and combines input from an inertial measurement unit on the excavator and position sensors in the boom, stick and bucket cylinders to locate the bucket cutting edge to within a few millimeters.

“The excavator operator can put his bucket tooth in three or four different locations to measure and mirror a slope and actually design a canal or ditch or trench right there on the monitor in his machine,” says Hagemann.

Until 2015, excavator grade-control adoption lagged tractor and grader use because the 3D systems cost as much as tractor automation, but excavator systems only indicated where the bucket cutting edge was relative to the desired grade. As the bucket cutting edge approaches the designed depth of the excavation, the indicate system alerts the operator with lights on the monitor in the cab and sounds that change as the machine gets closer to target.

Caterpillar estimates its indicate-only Accugrade Dual GNSS system can help an excavator operator hit grade targets 22% faster than machines without digital help. But excavations are only as accurate as the operator’s ability to follow the guidance.

“Contractors are looking for not just qualified help, but people who are willing to learn – to get qualified,” says Jack Louvar, operator trainer and technology specialist at Caterpillar dealer, Altorfer Cat. “Grade technology helps bridge that gap.”

Caterpillar estimates that excavator operators of all experience levels will be able to reach target grade up to 45% faster than unaided excavation using the new semi-automated Grade with Assist option on excavators with Accugrade. Cat claims the indicate-only Accugrade system speeds grading time up to 30%.

Assist technology helps the operator when the cutting edge gets within 4 in. of target depth by locking onto grade and automatically adjusting the boom up and down and bucket in and out to stay within three-quarters of an inch of the grade target. The operator simply controls stick speed using a single joystick.

Assist can also automate bucket movements to maintain a constant bucket angle, which the operator can adjust for optimum cutting approach in the digging conditions. Operator inputs on the joystick override automatic control, but the preset bucket angle can be automatically recalled after each dump cycle.

Grade Protect is a feature that prevents the cutting edge from penetrating below a preset grade, eliminating overcutting and rework. Ceiling and Floor Protect prevent any part of the boom, stick or bucket from going above or below a set elevation. The machine can excavate more safely in areas with low ceiling heights, such as indoors and under overpasses, and near overhead or underground utilities.

Intimidated by the Cost

Past pricing suggests Accugrade Dual GNSS adds about $60,000 to the cost of an excavator; Grade with Assist might up the ante another $8,000 to $10,000 (note: final pricing is up to the dealers).

These are big numbers, but reaching grade 22% faster (by adding an indicate-only system) or 45% faster (with automated Assist) should give you an idea of the technologies’ potential ROI.

Reduce the fuel and labor costs by the percentage appropriate to the technology you’re considering. Reduce the number of machine hours for those jobs by the same percentage. Eliminate the cost for grade stakes, grade checkers, and rework. Reduce the volume of bedding or other imported material by the amount these systems improve grade accuracy.

According to Hagemann, many contractors recoup their outlay for Accugrade systems in the duration of one big job. Many more earn back their initial investment in the first year.

Contractors concerned that their volume of grade-sensitive excavating won’t generate return quickly enough can choose a lower-cost, indicate-only option that does some of what Accugrade does. Two-dimensional Cat Depth and Slope costs in the $14,000 to $18,000 range, depending on size of machine, and works with a rotating laser to provide much the same grade indication as Accugrade: audible and visual alerts on the standard excavator monitor as the bucket cutting edge approaches the design depth.

Depth and Slope adds a laser receiver and position sensors to the boom, stick and bucket cylinders. The sensors allow the excavator’s electronics to calculate the exact position of the bucket cutting edge relative to the excavator tracks and show it on the standard excavator display.

Using Depth and Slope requires a hub or stake with known elevation. The operator starts by touching the bucket to this benchmark, which calibrates the elevation of the laser reference. Now the operator can move the machine around the site, working with the laser beam as the fixed reference. The operator enters on the monitor the desired excavation depth, and the system indicates how close the bucket cutting edge is to grade as the excavator digs.

While Depth and Slope won’t allow the operator to design sloped work from the cab, it can be configured to dig single slopes parallel to the boom and stick. Altorfer’s Louvar has seen it change contractors’ cost expectations.

“I have one customer that got Depth and Slope built into a 329,” he says. “I told them it was going to free up time, and they were just really going to see a benefit. So they took me up on it and put a new operator on that machine. He had just 30 to 40 hours of experience operating equipment.”

Louvar trained the operator in less than two hours, and the next day the contractor turned the new guy loose digging about 300 ft. of pipe runs.

“He dug all that trench by himself with perfect slope (they came back afterward and confirmed the grades with a GPS rover),” Louvar says.

The job would have taken twice as many personnel hours without the technology. “You would need somebody in the trench checking grade, or the operator would have to check the trench. And when you start getting in and out of the machine, now you run the risk of falling,” Louvar says. “Plus, the excavator’s idling, burning fuel.

Assistance Technology: Who Needs It?

Grade Technology: Finding the Best Fit for Your Operation