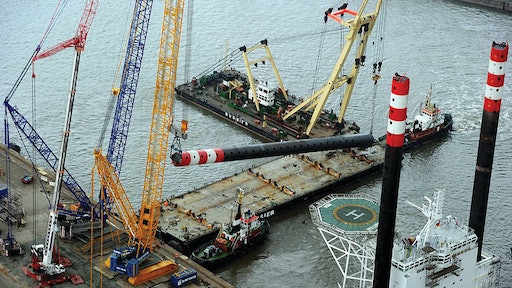 On behalf of Lloyd-Werft Bremerhaven AG, the Sarens Group recently lifted two sets of four gigantic jackup legs onto two offshore installation vessels belonging to RWE OLG GmbH, a logistics company that is part of RWE Innogy, at the free port of Bremerhaven in Germany. These legs enable installation vessels to lift themselves up from the water in the middle of the sea while installing wind turbines. The Sarens team relied on two Terex CC 6800 Crawler Cranes to lift the 1,388,912,630-pound (630-tonne), 256-foot-long (78-meter) steel colossi with the assistance of a floating crane.

RWE subsidiary Innogy commissioned a South Korean shipyard to build two installation vessels designed for erecting offshore wind farms: the “Victoria Mathias” and its identical sister, the “Friedrich Ernestine”. Both self-elevating vessels arrived at Bremerhaven in February 2012. However, the jackup legs were left behind in South Korea because it was easier to ship them separately. A couple of months later, the Sarens Group and its specialists were chosen to install the legs, which were just under 262 feet (80 meters) long and had a diameter of about 12.3 feet (3.75 meters).

In order to lift the legs, the Sarens Group decided to use two Terex CC 6800 Crawler Cranes. “Given that the loads’ enormous weight required the use of two cranes, it was definitely a good idea to use two units of the same exact model so that we could ensure that everything would be perfectly synchronized,” said Jelle Schepens, a project manager at Sarens.

Before the lifts could start, it was first necessary to reinforce the port wharf so that it could bear the weight of the two cranes and their loads. Sarens sunk a 4.59-foot-thick (1.40 meters), 98.4- by 114.8-foot (30 by 35 meter) concrete slab into the floor in front of the dock, which was then used to set up both CC 6800 units.

One crane was brought to the site by land while the other traveled from the U.S. to Bremerhaven by ship. The second crane was brought all the way to the wharf wall so it could be set up on the slab directly from the ship. A total of around 80 trucks transported all of the required components for the two CC 6800 units to the site. It then took an eight-person Sarens team two weeks to set the cranes up.

The team had to deal with constrained space conditions at the site from sharing the wharfage with the vessel outfitters and their building materials. In addition, since the assembly was being performed at a free port, the project was legally considered to be taking place abroad in non-European territory. In other words, all building materials and components had to go through customs in order to reach the site, which not only entailed an enormous amount of administrative work but also made the scant time available for the project all the more dear – the job had to be completed by May 21.

The weather did not help, either. “We had to wait four days until the wind slowed down to less than 22 miles per hour," said Schepens. "The conditions weren't right for the job until May 17, four days before the Victoria Mathias' christening." As a result, everything had to be done at record speeds and further delays had to be avoided at all costs.

In order to make it possible to perform the lifts evenly with the required lifting capacity, the hooks on both cranes were connected to a heavy-load spreader. “We placed angular position sensors on the spreader so that both crane operators would immediately be alerted if it became tilted and would be able to balance it out right away,” said Schepens.

The two CC 6800 units picked up the legs from their head end and hoisted them with the help of a crane vessel, which followed their lead as it moved the opposite end in a controlled manner while the legs were being vertically raised. Once the jackup legs had been placed in a stable upright position, the floating crane was disconnected and removed. The Terex cranes then lifted the legs approximately 312 feet (95 meters) high and swung within an approximate working radius of 69 feet (21 meters) above and beyond the vessel’s deckhouse until they reached the required position. A tugboat then towed the installation vessel to its exact required position so that the legs could be lowered down into position in the vessel and bolted there.

“The fact that the jackup legs were so heavy meant that there was always the risk that the Victoria Mathias could list and capsize due to the one-sided load,” said Schepens. In order to prevent this, the ship was balanced with water with perfect synchronicity on the opposite side while the legs were being lowered into place.

The Sarens team was able to perform each lift smoothly and on. The lifts for the second installation vessel, the “Friedrich Ernestine”, at the beginning of June were a comparatively relaxed affair for the Sarens team.

Rain or shine, your work must get done. Our ADTs are designed to keep you on solid ground. Demo a machine today!
October 1, 2020
Latest
Crane