Electric wheel loaders offer emissions and noise reductions, expanding the jobs and environments in which they can be used. 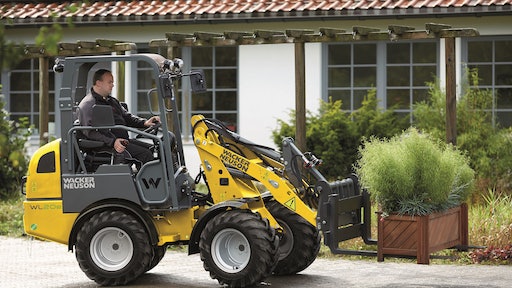 An electric motor built into the drive system of the Wacker Neuson WL20e ensures high performance and tractive force can be achieved.

As electrification technology continues to advance, so does the range of machine types to which it’s applied. Electrically powered wheel loaders are among some of the more recent machine introductions.

During this year’s INTERMAT, Wacker Neuson exhibited two electric wheel loaders, the Kramer 5055e and the Wacker Neuson WL20e. Both machines are part of the company’s range of emissions-free equipment and are capable of working up to eight hours on a single charge, depending on the application.

The machines were shown operating within an indoor demo area, demonstrating one of their many benefits — the ability to be used inside buildings. This not only helps increase the applications and environments in which the loaders can be used, but ensures the health and safety of those working around them.

Stefanie Wieland, head of Group Brand, Marketing & Communication at Wacker Neuson SE, says there are some areas, especially in Europe, in which vehicles with a combustion engine are completely prohibited. Because of this, the availability of electrically powered equipment is important.

In addition, the noise levels of electrically powered wheel loaders and other equipment is greatly reduced, enabling their use in residential areas and other noise-sensitive areas.

Reducing noise and emissions were major factors for Wacker Neuson’s development of its electric wheel loaders — which Wieland says will soon be available in the U.S. — as well as its entire range of zero-emission electric equipment.

According to Wieland, the concept for the WL20e and 5055e electric wheel loaders is based on time-tested large-scale technology used in material-handling equipment. The company has chosen to use absorbent glass mat battery technology, which is common in forklifts. This closed and maintenance-free lead acid battery system is specifically designed for high-demand applications. The weight of the battery provides the added benefit of serving as counterweight.

An integrated onboard charging unit means end users are not required to rely on fixed charging stations on site. Instead, they can plug the machine into an outlet and recharge the battery whenever necessary. “This offers maximum flexibility at every site of [use],” says Wieland.

The battery drives two electric motors on the loaders: one for the drive system and one for the working hydraulics. Power is automatically provided by the respective motor, which helps to minimize energy consumption.

Wieland says designing the wheel loaders in this manner ensures low operating costs and optimal battery run times. With an electric motor built into the drive system, high performance and tractive force can be achieved. Meanwhile, the motor for the hydraulics system delivers only the amount of power required for the application at hand, reducing unnecessary power draw.

“These motors are particularly energy efficient with degrees of efficiency from 94% to 97%,” says Wieland.

Efficiency is an important aspect of electric equipment. Last year, Volvo Construction Equipment (Volvo CE) presented field test results for its LX1 prototype electric hybrid wheel loader, which showed an average fuel efficiency improvement of 50%. It has since introduced a second-generation prototype, the LX2. Like the LX1, the LX2 is part of a research project and is not commercially available.

To make the machine electric, the combustion engine has been replaced with a lithium-ion battery, which stores enough electric energy to operate the machine for eight hours in its most common applications, such as light infrastructure construction and landscaping. The LX2 also incorporates dedicated electric motors for the drivetrain and for the hydraulics. Decoupling the subsystems has led to higher efficiency in both the systems and the machine.

“[The LX2] incorporates the latest advanced chemistry battery technology. As it’s electric, no particulate matter, nitrogen oxide or carbon dioxide are released into the environment,” says Ulrich Faß, Volvo CE emerging technologies manager. “This, together with the fact that it has extremely low noise levels, makes it ideal for use in cities and densely populated areas.”

While there are no direct plans to bring it to market, the LX2 provides a demonstration of potential capabilities for the future. “Volvo CE has long-term plans to develop products and services for electromobility, including electric hybrids and electric sites,” says Scott Young, electromobility director.

According to Young, Volvo CE believes there will be a major shift toward electric hybrid technology in the future, but end users continue to demand improved efficiency now. As such, it will continue to optimize more conventional technologies, but expect to see elements of its design incorporated into these products.

“This supports short- and mid-term developments and requirements while the market continues to accept hybrid technology, as technology improves and the cost of new technologies decreases,” says Young.

Similar to the Wacker Neuson wheel loaders, the e5 features an integrated battery charger for charging anywhere a 230V/10A power outlet is available. Operators can continue using the machine while it’s plugged in and charging. The battery is fully charged in approximately five hours, but is capable of reaching 80% capacity in three hours. The zero-emissions machine can be used indoors or outdoors.

Avant Tecno also offers the e6 battery-powered loader, which uses a 288 Ah (14.5 kWh) lithium-ion battery with the option of a 400V/16A or 400V/32A rapid battery charger. The company says the rapid charger considerably reduces charging time compared to the built-in charger on the e5; a 100% charge can be achieved within one hour.

The typical drive system in the company’s loaders consists of a variable-displacement hydraulic pump, four hydraulic drive motors (one on each wheel) and a combination of hydraulic valves, hoses and fittings. The eSeries loaders feature the Optidrive drive circuit, an updated version of this drive system.

Hydraulic oil is used to provide drive power from the machine’s 6-kW electric motor to the four hydraulic drive motors. Fewer hydraulic hoses and fittings reduce the amount of heat generated when hydraulic oil flows through it, and thus reduces fuel consumption and power draw from other componentry. Avant Tecno says there are 20% fewer hoses and 60% fewer fittings.

Reducing the number of hydraulic components enables Optidrive to reduce power loss by up to 1.5 kW, roughly 10% of the total power used in the drive circuit. It also helps improve maintenance as there are fewer components that may need fixing or which could prohibit accessibility to other parts of the machine.

Optidrive also enables a lot of pushing power in a compact design while maintaining a low center of gravity. It improves performance of the eSeries models by as much as 10%, according to the company.

Emissions reduction and improved efficiency will continue to be key drivers for equipment design for years to come. With more manufacturers applying electrification technologies to more types of equipment, there will be further options available for end users to get their work done while complying with evolving environmental requirements.

Four loader models incorporate a 180° swivel arm that pivots instead of requiring repositioning of the machine
Mecalac North America
March 19, 2020

Compact Wheel Loaders Emerge as a Favorite on Jobsites

Bobcat to Bring Small Articulated Loaders to Market in Early 2020

All models can lift and handle heavy loads for their size for enhanced lifting capacity
Bobcat Co.
October 21, 2019

CASE has made it easier than ever to dial in compact wheel loader performance with all-new electro-hydraulic controls that allow operators to dial in boom and bucket speeds independently to match the demands of the job.
Case Construction Equipment - CNH
September 18, 2019

Even experienced wheel loader operators can benefit from these tips to extend wheel loader life and performance
September 13, 2019

In unveiling three electric compact wheel loaders at bauma, Volvo says it will cease diesel engine development for this range of machines
April 10, 2019

Recently introduced to the US market, the Schäffer 2428 SLT sets a new standard for the growing market of ultra-compact articulating wheel loaders.
DFD Loaders Inc.
March 20, 2019

Improvements to the linkage system, coupler system and LED lighting have all been integrated into Cat's 938M
January 22, 2019

Volvo has committed to produce and sell electro mobility by 2020 in its compact excavator line from EC15 to EC27 and compact wheel loaders the L20 to L27
January 22, 2019
Follow Us