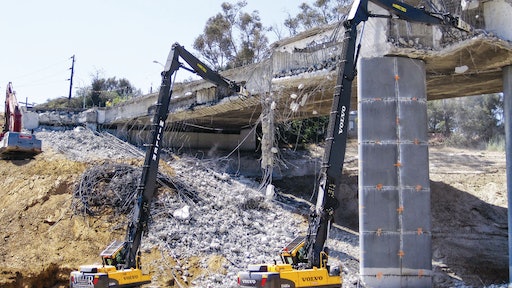 Two Volvo EC460CHR high-reach demolition machines were used to demolish two lanes of the four-lane, 578-foot-long bridge that carries Mulholland Drive across the 405

Construction on Interstate 405 in the Los Angeles area was supposed to cause traffic to be snarled for hours on one of the world's busiest freeways. It was supposed to be "Carmageddon". But that didn't happen.

Instead the project ran around the clock and was completed well ahead of schedule, thanks in large part to two Volvo EC460CHR high-reach demolition machines. Construction included widening I-405 by one lane in each direction. In the Sepulveda Pass, a 578-foot-long bridge carried Mulholland Drive across the 405. Since the 405 was being widened, the bridge needed to be demolished and a new, longer bridge will take its place.

The Mulholland Bridge is four lanes wide, two in each direction. Two lanes in one direction needed to be demolished, leaving two lanes to carry traffic while construction proceeded to replace the demolished half. But the demolition was the tricky part. The deck couldn't be torn down with conventional hydraulic breakers working on top, and dynamite was ruled out for the girders and two columns because a gas main crosses the bridge.

So to demolish the girders and columns, the main demolition contractor turned to Miller Environmental Inc., Anaheim, Calif. Miller owns the two Volvo EC460CHR high-reach demolition machines, which are 90-foot-class machines that could demolish the Mulholland Bridge by working from below, on the 405.

"The high-reach concept is very European," said Walt Reeves, segment manager, demolition, Volvo Construction Equipment. "In Europe when they take down a structure, they process it as it goes down. That way you have less work at the ground level; you've pulverized the structure in place."

A layer of dirt four feet thick was placed on the 405 to protect the freeway from damage caused by falling concrete. "By the time we were called in to work, it was about 4:00 a.m. on a Saturday," said Gregg Miller, president and owner of Miller Environmental. "Our scope was to attack everything from the ground working at the high elevations. We had the two high-reach machines there, and there were some other activities on top of the bridge, breaking the deck. We broke the horizontal sides of the bridge and another machine would snip the rebar.

"We started in the middle, working about 85 feet high," Miller said. "We worked our way toward each side of the bridge, using 6,000-pound attachments off the ends of the high-reach machines. We ran continuous 12-hour shifts throughout the operation. Approximately 4,000 tons of concrete were removed from those two lanes. And we removed two columns, one on each side of the bridge. In the next phase, when we demolish the other half, we'll have four columns to remove. We concluded work on a Sunday, probably about 7:00 a.m."

"The machines have push-button controls and great visibility. The tilt cab tips the whole cab back hydraulically. That makes it very nice to look up at your work and see what you're doing," Miller said.

Reeves said the high-reach machines feature full-length, hydraulically operated pins that pin the high-reach boom to the machine's base boom. "Those hydraulic pins ensure that you get a good connection between the two booms," he said. "Because when you put a 6,600-pound attachment up 90 feet in the air, you want to have very tight connections. If you get slop in your joints, you'll wave that tool around quite a bit."

Reeves said the hydraulically extendable tracks on the Volvo EC460CHR high reach machines give them very close to a square footprint. "They're almost as wide as they are long," he said. "That gives the machine excellent stability on the ground. The tracks widen and narrow down with the use of hydraulics in around 10 minutes. And yes, it's a long-carriage machine."

Miller said the challenge of the Mulholland Bridge was on the crew to complete the demolition on time. But they faced other concerns, too.

"Obviously safety on the job was a very important factor," Miller said. We had many safety meetings with the general and demolition contractors - before the demolition and during the work and throughout each shift. Everyone involved attended the safety meetings - all of the field staff and the project management people."

"Fatigue was a challenge," Miller pointed out. "We were concerned about fatigue for the crew. The guys were coming off a day job, or may even had that day off, but they were not really sleeping during the day. Then they needed to come to work at night.

"As far as visibility goes, the area was really well lit up," Miller said. "It almost looked like daytime working out there. The guys had a lot of adrenaline running out there beforehand. Everybody rose to the task and came through with flying colors."

Before demolition, the work schedule had called for opening it at 5:00 a.m. Monday morning. Bridge work on the roadway was completed some 16 hours ahead of schedule.