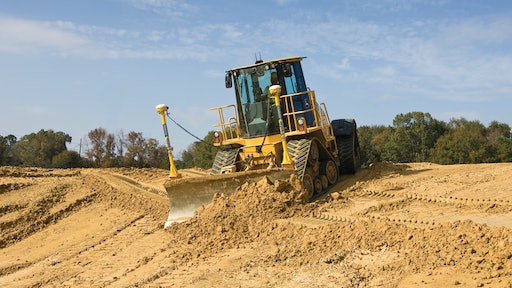 The St. Richard's Housing site included a 40-ft. elevation drop from one end to the other. Heimes Corp. performed all the site prep following the contour of this hill, which follows a 6:1 slope.

Closed and vacant since 2009, the school and nearby rectory of St. Richard’s Catholic School in Omaha, NE, are now a part of a renewed-use project. The 9-acre site will include a new $22 million intergenerational campus that will serve senior citizens and others who are at or below 50% of the Area Median Income. Holy Name Housing is the owner and will be administering the various planned social service programs with Heartland Family Service once the facility is completed and up and running.

Work has commenced on renovating the buildings, which were built in the 1960s, and developing the site for 44 energy efficient, handicapped-accessible cottages requiring multiple-elevation building pads to comply with ADA requirements. Heimes Corp., based in Omaha, is the subcontractor for the $5 million site grading and sanitary pipe and paving work.

The St. Richard’s Housing site has its challenges. “There’s about a 40-ft. elevation drop from one end to the other,” states Chad Henry, grading superintendent at Heimes Corp. “We’re performing all the site prep and following the contour of this hill, which follows a 6:1 slope.”

What Henry initially found on the site was an open field area with a road running through the middle of it. The soil conditions were high-moisture clay.

“We removed the existing road, did the clearing and grubbing work,” he says. “I believe we removed about 6,400 sq. yds. of paving there before we started the site grading and pad work.”

Heimes’ responsibility included creating the digital site plan using Business Center – HCE. The software was reported to be essential to the data preparation for the Trimble machine control and site positioning systems used on the project.

The timetable was a tight six months, since the owner wanted to see physical evidence by mid-summer of house structures being built on the pads. The entire site project was completed before the December 30, 2012 deadline.

Heimes utilized grade control technology on every aspect of the grading operation. “We used dual mast Trimble 3D GPS technology for nearly everything,” Henry says. “We used the GPS equipment to build all the pads, to do all the road grading. We used GPS on our excavator to do all the wall excavations, and then we loaded out excess dirt with our GPS excavator. That eliminates the dozer or anything else being with the machine.”

Heimes Corp. was already using Trimble GCS900 grade control systems with GPS on its dozers and soil compactor when it decided to upgrade its John Deere 764 HSD High Speed Dozer to the latest version of GCS900 with the new GradeMax technology for dozers. The advantages were noticed immediately on the St. Richard’s Housing site.

“GradeMax technology makes the Trimble system faster. The processor seems to run quite a bit faster for changing offsets and changing designs. And the other great benefit is you can adjust your valve speed as you’re moving,” Henry says. “We’re able to save the time it takes to get to accurate grade. Instead of making three test passes, you make one. By the time you’re done making your test pass, it will be adjusted to how you want it to be.

“In addition to the faster speed, we found the system especially helpful in the later stages of completing the project where we needed to jump from one task to another,” he adds. “We could place topsoil with it and use it to backfill curbs and re-grade and clean up building pads where necessary.”

GPS 3D grade control proved essential for cost-effective completion of the project. “Considering the challenges of the multiple step building pads, I cannot imagine working on this project without GPS 3D machine control,” says Henry. “The Trimble GCS900 system helps the machine operator jump from one task to another, while maintaining grade throughout.”

Surveyors were used to stake all the finished grades on the building pads when they were completed. They also staked the road after the Heimes crew had completed the subgrade prep and work for the concrete placement. “The staking was pretty minimal compared to what would have been required if we if we didn’t have the systems,” Henry states.

Throughout the project, Henry maintained a four- to five-worker crew. He admits that if they were not using machine grade control, the job would have required more workers on site.

“It would have cost us easily 25% more to complete the project without the technology. There definitely would have been more people involved and it wouldn’t have been completed nearly as fast,” Henry states. “The project would have required more machine operators, more grade checkers, and there would have been a lot more survey work for the surveyors and ourselves.”