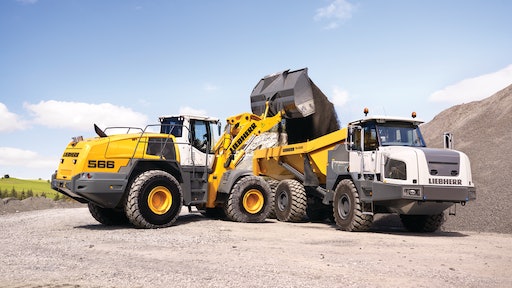 Liebherr offers an industrial parallel-lift linkage as an option to the standard Z-bar on its L 550 and L 556 models. This L 566 offers full breakout force and parallel lifting capability.

Maximizing utilization with a wheel loader starts with matching the machine configuration to the application. Most manufacturers offer two different linkage options: Z-bar and parallel-lift (or tool carrier). The choice of which one to use depends on how you plan to use the machine.

“The specific job you are looking to accomplish should be the main factor in determining the proper wheel loader linkage configuration,” says Shane Sirmons, business development manager at Hyundai Construction Equipment. “If your main function is loading/unloading items with a fork attachment, then a parallel-lift configuration will work best. Moving material in buckets in applications requiring greater digging power will be best handled with a Z-bar configuration.”

Each configuration has distinct advantages. The Z-bar linkage is the most traditional and has been around since the wheel loader was invented. Named for the “Z” shape of the tilt cylinder, lever and link layout, it has been the most popular linkage configuration for years. Z-bars have the least number of pins, links and levers to maintain. This linkage is traditionally used with a bucket attachment.

That said, Z-bar configurations have visibility constraints when used with attachments. It is harder to see the load because the hydraulic cylinder is in the center of the operator’s field of vision. The Z-bar will also tend to roll back when raised, which makes holding a load level a challenge for an inexperienced operator.

Visibility is a big selling point for parallel-lift linkages. With this type of linkage, the operator has a clear view down the center of the lift arms, which is helpful during precise pallet handling or pipe laying applications.

“Parallel-lift linkages offer the best operator visibility. The links are mounted on the lift arms themselves directly above the lift arms [instead of in between them], so the view down the middle of the machine is unobstructed,” says Bell.

For example, Kawasaki wheel loaders with TM (Task Master) technology offer in-line parallel linkage matched with a quick coupler. The parallelogram linkage allows the attachment to remain level throughout the lift cycle, making it suited for fork handling and boom applications. TM is currently available on the 65TMV-2 and 70TMV-2 wheel loaders, although there are plans to expand the offering in the new Tier 4 Interim generation.

Parallel-lift linkage designs vary across manufacturers, but in general are more complex than Z-bar linkages, with more links, pins, levers and cylinders. “Historically, many parallel-lift linkages were designed using two hydraulic lift cylinders and two sets of linkages,” explains Chris Cline, utility loader product manager, John Deere Construction Equipment. “This results in twice as many parts to service and maintain than the single cylinder and linkage of the Z-bar design.”

Parallel-lift linkages are offered on many manufacturers’ compact to mid-size machines, where requirements for precision, visibility and fork usage tend to outweigh the need for added breakout force.

“Advantages of these hybrid designs are excellent breakout force and acceptable parallel lift,” says Cline. “Disadvantages are reduced visibility to the attachment and the fact that the parallel lift is not as fine as a true parallel-lift machine.”

John Deere offers a hybrid parallel-lift option on the 444K, 544K, 624K and 644K loaders under the Powerllel designation. Breakout forces and boom lift are not sacrificed due to the patented linkage design, in which the floating bell crank is not connected directly to the boom but via a Y-link. The resulting digging forces do not work against the boom as in other designs. Another advantage is the in-cab “press-to-set” Return-to-Dig feature on the Sealed Switch Module. There are two settings: one for forks and one for a bucket.

For those requiring greater visibility and a finer parallel lift, John Deere offers the 624K Tool Carrier. In this design, the bucket cylinders align with the loader frame, offering optimal visibility with clear forward viewing, parallel lifting and a wide stance for added lateral stability. While considered a true parallel-lift design, this design does not sacrifice breakout force or stability.

Liebherr currently offers an industrial parallel-lift linkage as an option to the standard Z-bar on its L 550 and L 556 models; this will be followed by the Tier 4 Interim versions of the L 566, L 576 and L 580. “The advantage of the industrial linkage is the full breakout force it provides while the lifting arms and bucket are raised parallel,” says Robert Klima, Liebherr product manager. “This is important in an industrial application where forks or grapples are common, and allows the machine much more rollback force in the lifted position while maintaining the parallel lift.”

Brady suggests choosing parallel-lift linkage for heavy attachments and those that call for parallel lifting (forks, grapples, light material buckets). Z-bar linkage, he notes, is most appropriate for heavy digging and standard operations such as aggregates, sand, gravel and quarrying.

It’s important to know the appropriate attachment size and weight for the loader configuration. “When working with a Z-bar configuration, operators always want a certain size bucket,” says Sirmons. “Before you choose any attachment, know the material you are working with and the proper size attachment/bucket to put on the wheel loader for the application to ensure you don’t overload the machine.”

There’s a perception in the industry that parallel-lift loaders are tool carriers and useful with fork attachments only. This isn’t necessarily the case, says Bell. Attachments and couplers can be used on both configurations (except for forks or attachments that need to be raised flat). An experienced operator can feather levers and keep attachments level with a Z-bar linkage, as well.

No matter which linkage you choose, do your homework. “If you select the proper linkage based on the application and the attachment, there are no trade-offs [in breakout force or parallel lift] because the linkage is correct from the start,” says Brady.

Bell agrees, adding, “Find a machine that fits your application rather than adding inappropriate attachments to the wrong machine.”

“Proper daily maintenance is also important with either linkage configuration,” concludes Sirmons. “Linkages take the brunt of the workload all day and need to be properly greased and maintained to not only help them last longer, but to also help them operate smoothly throughout the life of the machine.”