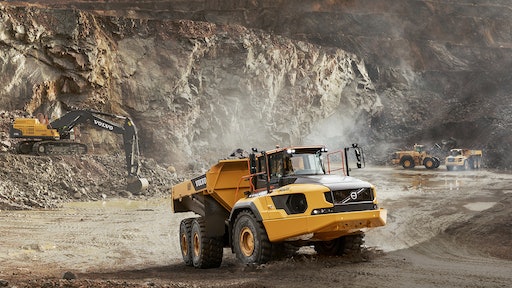 The 60-ton-capacity A60H is Volvo Construction Equipment’s largest articulated hauler to date. It is designed for heavy hauling in severe off-road operations, including quarries, opencast mines and large earthmoving operations.

“The A60H is a perfect fit for contractors who typically run multiple articulated haulers on long-term earthmoving projects. In many cases, customers could expect reduced operating costs by replacing two smaller trucks with one A60H,” says Eric Fatyol, product manager, GPE products at Volvo Construction Equipment. “The A60H could also open up new areas of production for mine and aggregate sites by providing access to areas of the site that were previously inaccessible with rigid trucks. Similarly, the A60H could extend the production season in harsh-weather regions and also eliminate the need for hiring outside contractors to handle overburden work.”