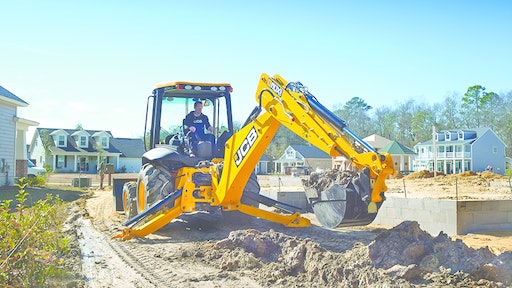 JCB introduces Tier 4 Final engines and a high degree of machine automation for its 2015 backhoe-loader model line-up. Through development of its own range of Ecomax diesel engines, the company has achieved the Tier 4 Final emissions standard without the need for a diesel particulate filter (DPF), reducing cost and complexity for the customer.

Both the rental-market 3CX, now built in JCB’s Savannah plant, and the 3CX-14 model are powered by a 74-hp version of the Ecomax diesel engine. With no change required from the Tier 4 Interim model, this engine has no DPF or exhaust aftertreatment. The 3CX-14 will also be offered for the first time with an optional powershift transmission and Advanced Easy Control (AEC) servo levers. An air suspended operator’s seat is also available with standard AEC.

The 3CX Super is offered with a Tier 4 Final Ecomax engine rated at 91 hp or an optional 109-hp engine, while the 4CX Super comes standard with the 109-hp engine. Both engines use selective catalytic reduction (SCR), with a diesel exhaust fluid (DEF) additive to meet Tier 4 Final emissions. DEF usage is less than 3% compared to the diesel, so the DEF tank will only have to be topped off once for up to 10 tanks of fuel.

Automation features on the 3CX Super and 4CX Super backhoes include: