British expedition chooses two Cat D6Ns as primary tools to carry shelter, equipment and supplies in the first ever attempt to cross Antarctica in winter 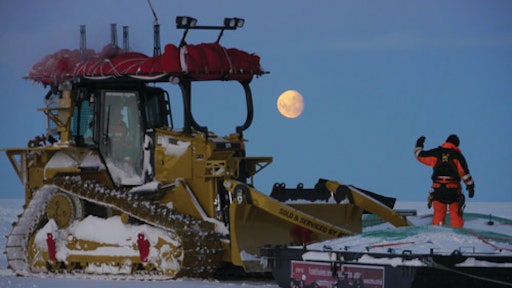 The Coldest Journey has begun. After a one-day, weather-related delay, the five-man Ice Team and two Cat D6Ns headed off into the polar winter on March 21st. It was the beginning of the first attempt to cross Antarctica's 2,000 miles in the winter.

Specially modified Cat D6Ns play a key role in the expedition, pulling cabooses for shelter, scientific work and storage, including jet fuel designed not to freeze. The dozers will also fill, bridge or circumnavigate cevasses.

The machines will be exposed to the coldest conditions on earth during the six-month journey. Cat Finning mechanics Spencer Smirl and Richmond Dykes are part of the Ice Team. They have the tasks of operating and maintaining the D6Ns during The Coldest Journey.

A winter traverse of the Antarctic is widely regarded as the last true remaining polar challenge and the expedition is considered no less than an attempt to reassert Britain’s status as the world’s greatest nation of explorers.

The journey has for many years been considered too perilous to try and the expedition’s five-man* “Ice Team” will have to overcome one of earth’s most hostile environments, exposing themselves to temperatures dropping close to -90 degrees Celsius and operating in near permanent darkness.

Having never been attempted, the expedition will provide unique and invaluable scientific research that will help climatologists, and form the basis for an education program that will reach up to 100,000 schools across Britain.

Video: How Antarctic Explorers will Use Cat D6Ns to Cross Crevasses

* The Ice Team was originally a six-man team led by Sir Ranulph Fiennes. Unfortunately, Fiennes had to pull out of the expedition in late February after getting a serious case of frostbite in his left hand.

Video: How Antarctic Explorers will Use Cat D6Ns to Cross Crevasses

You Can Design Your Own Cat D6 Dozer

New tool provides customers and dealers a better opportunity to understand the Caterpillar equipment including viewing key features and changes from the previous dozer model
April 11, 2019
Follow Us