Dozer Piles on Productivity and Durability

From first impression to the last, Case's 1150M dozer shows Walker Construction it can deliver both productivity and durability for the long term. 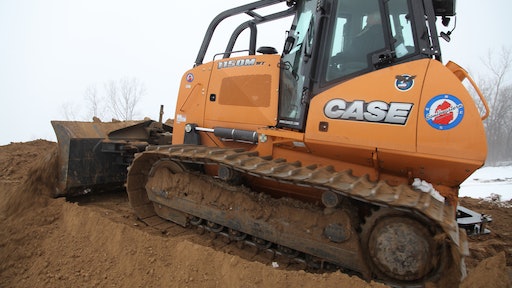 Over the past 40 years, the Walker family has learned a thing or two about adaptability and durability. Being able to adjust to the often tumultuous Detroit-area economy and transform Walker Construction, founded by Chuck Walker and his sons in 1975, to include everything from demolition and excavation to site utilities and finish work has given them the adaptability they’ve needed to survive.

“When we take on a project, we do it as if it were going to be our own,” says Matt Walker, the company’s current president.  “I always tell the inspector, ‘When you leave, this job is going to go on just like you were here the whole time.”

Adaptability and durability are also characteristics the Walkers look for in their equipment. Currently, the company’s business focuses on commercial site development, operating with six excavators, five dozers, three loaders, two track loaders, a skid steer, a roller, a crane, a 60-ton crane and various smaller tools and machines.

Recently, when it came time to add a new dozer to its fleet, the company was prepared to go with the same brand machine it had stood by for the past 35 years. That long history of devotion was overturned, however, when they purchased the new Case 1150M dozer from Southeastern Equipment Co.

“We buy our machines with the intention of keeping them for 20 to 25 years or more, so we want to buy something that’s built to last,” Matt Walker says. “I noticed right away that the front end of the machine is very heavy duty. The other thing that stood out to me was that all of the service and maintenance checks can be done from the ground.”

From easily accessed body panels, all of the unit’s regular check points, electrical fuses and filters can be accessed without having to climb on the machine. An easily removable floor panel in the cab also provides convenient access to the machine’s hydraulic components.

First impressions were reaffirmed once Walker Construction put the 1150M through its paces. The company brought it to a site with between 8 and 12 in. of frost, where they were going to wait for one of the excavators to arrive and start digging out some of the frost. Instead, Matt Walker says, “That dozer got right into it and started popping off chunks of frost as big as the machine itself. It was pretty impressive.”

“From the time I was young, one thing my dad always [said was] he ‘didn’t like equipment that would get into a pile and push around,” says Matt Walker. “This machine pushes right through straight.”

Walker says the improved fuel economy was another significant factor in their decision. “Fuel is one of our biggest costs. The 1150M is every bit as good, if not better, than all of the machines we demoed, and it far exceeds the other machines in our fleet.”

He noted that adding the diesel exhaust fluid (DEF) required for the SCR engine was a new task, but was simple. “It’s not that difficult,” Matt Walker says. “It’s just something that we have to get used to. The fill neck is right next to the fuel tank and it’s separated so that there’s no way you can confuse the fuel and the DEF.”

Also clear from the beginning was the improved visibility. With a new cab-forward design, floor to ceiling glass doors and a sloped hood, the 1150M emphasizes visibility in addition to power. “I want to know what’s going on with that blade at all times,” says Chuck Walker, who at 84 has been operating dozers since 1956 and still operates this new dozer daily. “We strip a lot of sites of top soil, and you’ve got to be able to see what’s going on with the blade so that you don’t get too deep.”

Both Matt and Chuck Walker said they found the dozer’s controls intuitive and easy to learn. “I ran the machine for 30 minutes, and I felt as comfortable with it as something that I’d been running for two years,” Matt says. “I was able to grade 400 ft. of curb in that 30 minutes. I never ran a machine that had that fine grading setting, and it was really, really nice.”

The 1150M’s fine grading feature, which increases accuracy by slowing the blade up to 40%, enables Walker Construction to achieve the precise blade control that is needed. In addition, it offers smooth, moderate and aggressive steering and shuttle settings, enhanced fingertip blade controls that allow for improved control over the blade angle and sensitivity, and blade shake for quick cleaning.

“We prefer the smooth (setting),” Matt Walker says. “A lot of our work is finish [grading]. Sometimes we’ll be grading right next to a building. It’s just a very operator-friendly machine.”

The blade shake function proves helpful in shaking sticky material from the blade and reducing stresses on the machine and operator. “Generally, you’d have to shake the blade ten or twelve times,” Matt Walker explains. “Now, this function does it in two or three seconds (with a single button).”

Even though most of their work is on dry soil, Walker Construction opted for the added stability of the wide-track model, which tips the scales at 32,174 lbs. and features 5.4-psi ground pressure.

In addition to those positive first impressions, perhaps the most rewarding benefit of the 1150M arrives at the end of the day thanks to the comfort and sound quality of the machine’s cab. The positive-pressure cab offers advanced sealing features and an isolated design to keep out both dust and noise to provide a quiet, comfort-controlled environment that reduces operator exposure and fatigue.

“This machine’s a whole lot quieter than we’re used to,” Chuck Walker says. “You’re not worn out by the end of the day. Some of these machines work you harder than you work them.”

Another feature that assists the operator is the electrohydraulic controls, which replace mechanical linkage controls with electrohydraulics to greatly reduce the amount of force needed to manipulate the blade. “Especially in the winter, when the hydraulic fluid is thicker, our operators used to complain that their wrists hurt by the end of the day,” Matt Walker says. “The electrohydraulic controls on the 1150M completely eliminated that, and the movement of the controls is a very natural motion and didn’t take long at all to get used to.”

Walker Construction obtained the 1150M through a lease-to-own arrangement that includes CASE ProCare, which comprises a full-machine factory warranty and planned maintenance for three years or 3,000 hours, as well as a three-year Advanced subscription to the company’s SiteWatch telematics service. The SiteWatch service gives the company access to real-time data on the machine’s usage and location, allowing them to identify excessive fuel consumption, reduce downtime through improved maintenance scheduling and avoid machine failures through automated function alerts. Most importantly, it allows contractors to add equipment without worrying about unpredictable maintenance and repair costs.

“Maintaining the machines can be a big cost,” Matt Walker says. “With the way everything from labor costs to oils are going up, it’s nice to know the maintenance for the first three years is locked in and that it’s going to be the dealer - who is the most familiar with the machine - doing the work.”

The Walkers have witnessed first hand the effects of increased costs and reduced demand. The past 10 years has seen Detroit bear the full brunt of the economic downturn and many of Walker Construction’s competitors have been forced out of business.

Determined to survive, the Walkers knew that adaptability, along with excellent workmanship and customer service, were critical elements to their success. Having traveled as far as North Carolina for work during the height of the recession, the company prides itself on deriving a substantial portion of its revenue from word-of-mouth and repeat business.

“We feel that when we get a new customer we’ll be able to keep him by being fair with prices and doing excellent work,” Matt Walker states. Thanks to that approach, business has turned a corner. “We’ve been very fortunate, and it feels like we’re on an upswing.”