More Than a Fashion Statement 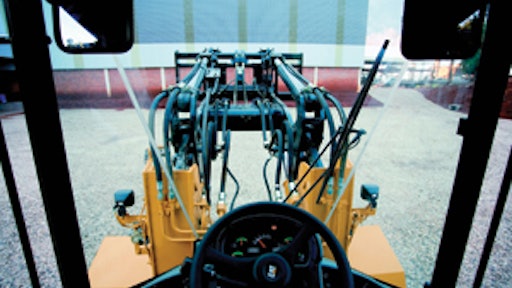 Wheel loaders have evolved, with rounded rear hoods, more glass area in the cabs, streamlined consoles and sophisticated rear-view camera systems. But the changes are more than "bling" to freshen up the showroom appearance.

A universal theme has been an increasing amount of glass surface in the cab. But this does not always translate into visibility.

"The amount of glass in the cab cannot always be a yardstick for comparison, because you can have a cab with the most glass but have a number of external components that block sight lines," says Matt DesVeaux, medium wheel loader design safety coordinator, Caterpillar. "That's why, during the design process, we really focus on the placement of components. For example, when working on placement of the front lights, we make sure they are in accordance with engineering specifications, but don't obscure operator visibility to the linkage and ground."

Placement of the glass used in the cab is more important than the amount of glass. "In an effort to increase perception of better visibility, some manufacturers may add glass panes in areas that are unusable," says Tullo. "For example, a glass pane dropped all the way to the cab floor may be perceived to add better visibility. But if there is a fender or a loader frame on the other side of the glass, no real visibility benefits have been achieved."

Added glass has both advantages and disadvantages. "The primary advantage of a large glass area is to increase the visibility," says Michael Gidaspow, product marketing manager, wheel loaders, Komatsu America Corp. "A major drawback to increasing the amount of glass is worse insulation for both temperature and sound. Another drawback is the replacement costs when the glass breaks. If the glass is curved or spherical, then the costs can be especially high. These are reasons that Komatsu works to use only as much glass as is effective for visibility."

Sometimes the increase in glass area is due to customer demand for larger cabs. "Hyundai increased the square area of its new Dash 7 cabs to give arm and leg room. The front window glass area was also changed to give more visibility all around and a better viewing angle for the corner of the bucket," says Dave Pooley, Hyundai. "The increases were of a practical nature to make the operator more comfortable and efficient."

Increasing the amount of glass does create challenges. "When you increase glass in a cab, you increase the heat rejection area, which works both ways — heat in the summer and cold in the winter," says Pooley. "To compensate for these variances, Hyundai increased the BTU on A/C to 20,000 BTU and heating was increased to 30,000 BTU."

Komatsu also made changes to accommodate the increased glass area. "A higher capacity heater/defroster/pressurizer and well-placed air ducts are crucial for winter operation," says Gidaspow. "Komatsu pioneered electric rear defrosters to allow more airflow to be directed towards the front and side windows, and especially the operator. This prevented the larger glass area from affecting operator comfort."

Keeping windows clear is a priority. "Window defrosters play a vital role for safe operation," says Tullo. "Two types are used in this industry: one uses heated air from the HVAC system; the other combines this and electrical heating via thermal grids pasted to the rear window. Volvo prefers to use the first due to visibility reasons. Electrical grids tend to add contrast problems when the operator is looking rearward, only adding to the confusion during operation."

Sunshades provided by most manufacturers and tinted glass can help prevent glare with the larger glass areas. Caterpillar H Series cabs feature a cab roof overhang on the front and rear sides for this purpose. "The roof also provides water runoff drains, directing water off to the rear of the machine," says DesVeaux.

Proper design keeps sound levels low despite increased glass surface. "With our new H Series, we moved noise sources away from the cab, such as the exhaust stack," says DesVeaux. "The result was improved cab pressurization, reduction of exhaust and engine noise to the cab and improved cab suppression to attenuate hydraulic noise. The results were a reduction of up to 4 dB, or 75 percent reduction in sound in the new H Series cab."

Sloping rear hoods also serve to increase visibility. "With a longer rear hood, a higher angle is needed to retain acceptable rearward visibility," says Tullo. "Volvo designs its machines with safety in mind, and rearward visibility is no exception — shorter rear hoods, good departure angle from the cab seat and darkening the top of the rear hood for less glare and lower operator fatigue."

Glare can be a problem. "Some manufacturers maintain bright colors on the rear hood that can cause eye strain and glare. Some even promote chrome exhaust stacks, perhaps creating an unsafe situation if the operator should become blinded from sun reflection," says Tullo.

Removing obstructions is a major focus of many new designs. "Komatsu has worked to move the muffler underneath the hood and keep a small exhaust stack," says Gidaspow. "This greatly helps to improve the rear visibility. We have also sloped and narrowed the engine hood and made flat windows standard equipment."

But Tier III standards limit how much you can shrink the rear hood. "With the new Tier III emission requirement, the cooling package changed slightly in our new H Series machine," says DesVeaux. "To maintain rear visibility, we took advantage of strategic locations to increase width only where necessary and still maintain good line of sight."

"Many manufacturers tend to keep instrument panels low and centered to balance between visibility and operator comfort," says Tullo. "Some are moving consoles aside or bundling the steering wheel and console together in a narrow tower."

The results are mixed. "Although that may seem to increase forward visibility, it's placement and configuration that truly determine the effectiveness of that design," says Tullo. "By moving the console aside, is there higher visibility where it's needed, or does the movement just allow the operator to see the rear of the tower and the front frame? Moving the console aside may lessen visibility to the ground and/or tires. Also, since the console is no longer centered, the operator is constantly moving his neck and head to see the gauges, adding to fatigue over the entire work day." Poor placement could also restrict operator movement in the cab.

"We put the operating information in front and the service information on the side," says Gidaspow. "This keeps the dash small and allows the operator to concentrate on the job and not worry about the machine. Komatsu has also lowered the belt line of the machine in the front and sides to improve visibility."

Caterpillar has carefully arranged its instrument gauges to take advantage of natural obstructions. "On the H Series, we have two areas where we have clustered instrument gauges and operator controls," says DesVeaux. "The instrument gauges are located on the front dash by the steering wheel for ease of visuals to the operator. The operator controls are integrated into a control panel located on the front of the right-hand ROPS post. We took advantage of the ROPS post visibility limitations and maximized component placement in this area to prevent additional obstructions."

Hyundai has centralized all gauges into a cluster. "The Hyundai cluster has integrated manual gauges and digital readout," says Pooley. "The operator has many options to set the display the way he wants to see it as he is working. Backlight has always been a complaint of the operators, as the sunlight drowns out the digital display. Hyundai has a new backlight system that allows the operator to see clearly in any lighting condition."

"If the operator can easily see what is in front of him, he can quickly and safely move the product without shifting in his seat. This lessens any frustration or fatigue that may occur otherwise during the work day," says Tullo.

Two of the most common linkage designs are Z-bar and parallel linkage, which is common on tool carriers. "The tool carriers are of varying designs and each contributes in its own way to try to make visibility a priority," says Pooley. Z-bar has visible constraints to the use of attachments and it is harder to see the equipment. This is why manufacturers offer a parallel linkage design on most of their loaders.

But there are new designs emerging. "Many manufacturers are moving toward a linkage that provides more visibility and versatility in one design — high breakout force and parallel lift," says Tullo. "However, many manufacturers may achieve one aspect but lessen another."

For example, a manufacturer might incorporate parallel lift, but hinder visibility with the attachment bracket or linkage design. "Volvo designed its linkage with the whole system in mind from the attachments to the OEM attachment bracket," Tullo states. "This design philosophy leads to high breakout force, parallel lift and excellent visibility to all attachments, including buckets, brooms and, most importantly, fork tines."

Caterpillar also emphasizes the importance of linkage design. "Recently, we redesigned our IT38G Series II for increased visibility," says DesVeaux. "By evaluating component placement and rerouting our hydraulic lines, we were able to substantially increase the viewing area from this integrated tool carrier."