Contractor Gets Schooled in Aggregate Preparation 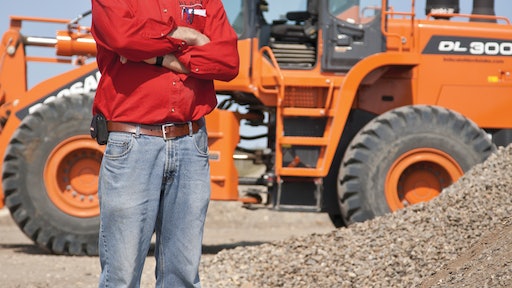 According to Dean Black, Black Construction, the Doosan DL300 loader provides the bucket capacity, traction, horsepower and quickness the company needs to keep the loading process in its aggregate pit moving forward.

When it comes to road repairs and street work, Dean Black knows his stuff. But his expertise doesn’t start and stop with streets. Black defines the company he founded in 1977 as a complete construction management contractor that will tackle everything from utilities to landscaping.

Black Construction, headquartered in Devils Lake, ND, has grown considerably since its humble beginnings more than 35 years ago. Today, the company ventures within a 100-mile radius of home to complete a variety of construction jobs, including site preparation, aggregate, demolition, grading, landscaping, pavement repair and utility installations. It employs anywhere from 10 to 30 people, depending on workload and season.

The contractor is currently riding the wave of an energy boom that is bolstering construction activity throughout the state. Last November, the state legislature allocated an extra $370 million for road repair and construction. In addition, some $340 million will go to schools over the next two years to help reduce property taxes, while $22 million will go toward a disaster relief fund for a state that has been inundated with floods in recent years.

Drying Out a Soggy School Site

North Dakota is one of only a handful of states that currently enjoys a budget surplus and the nation’s lowest unemployment rate. Among the many fortunate recipients of the state’s economic boon is the tiny community of Minnewauken (pop. 224). Situated on the shores of scenic Devils Lake, this small community realized it would be more efficient to combine elementary, junior and senior high students in one facility, and decided to move forward with construction of a new school.

Black Construction was chosen to handle all site preparation, including grading, footings, utilities installation and preparing the aggregate specified for the foundation of the school’s parking lot. The company also engineered and installed the sand footings that serve as the foundation for the new school building.

Preparing the soggy school site, perched high atop a hill overlooking scenic Devils Lake, presented some interesting challenges. “All jobs have their own unique things, and the most unusual about this project was the wet conditions that one doesn’t normally encounter at the top of a hill,” Black says. “It’s hard to describe how the water perches itself up there, way above the water table. That had to drain for at least three months before we could even get up there to dig footings.”

This required installation of several thousand feet of drain tile, positioned 6 to 8 ft. beneath the entire 80 acres, before excavation and earthmoving equipment could even access the site. “Once we got things dried out, we were able to establish good roads to and from the site,” says Black.

At that point, excavation crews were able to come in to scrape, load, haul, replace and level more than 60,000 yds. of dirt before the footings for the school’s foundation could be dug.

In addition to the school building site, Black Construction was responsible for preparing the 550-ft.-long by 180-ft.-wide parking lot. This process involved installing more than 3,000 yds. of gravel aggregate fabric, including storm sewer, beneath what would eventually become a smooth paved surface with the capacity to accommodate 150 vehicles.

The specified aggregate was to be composed of a precise mixture of various sizes of crushed stone, sand and gravel. One of the primary tools in the aggregate pit is the newest wheel loader in Black’s equipment fleet, a Doosan DL300 wheel loader with 4-yd. bucket. Black selected the DL300 loader after operating several loader models, including competitive brands, at the Doosan Real Operation Center (ROC), located just outside Tucson, AZ.

“The DL300 loader is the ideal weight, horsepower and size for my needs,” Black says. “I also like the way it is balanced and proportioned. I had the opportunity to operate both Doosan and other manufacturers’ loaders, and the DL300 had the best torque proportion for my needs. It’s also reliable, fast and easy to operate. You don’t have to worry about spinning the wheels when trying to load the bucket. Everything is proportioned just right.”

According to Black, the loader was instrumental in preparing the aggregate more efficiently, allowing his crews to produce more than 1,000 yds. of finished product within a typical workday. In a matter of three days, Black’s crews had loaded, crushed, mixed, blended, hauled and positioned the aggregate foundation in final preparation for a visit from the paving crew.

“Since we’ve had the DL300 loader, we don’t have to worry about keeping the aggregate plant going,” Black says. "It’s got the bucket capacity, the traction, the horsepower and the quickness to keep the loading process moving forward. The cab is so comfortable and has great visibility. This loader is an integral part of why our company operates so efficiently.”

More Work to Be Had

Having recently finished its work at the school, Black and his team are on to a street repair gig in nearby Maddock, ND, about 30 miles due southwest of Minnewauken. This company completed a forced main line sewer job there previously.

“The street repair project in Maddock is the type of work that is really turnkey for us,” Black says. “We have the milling machines to remove the old asphalt, the excavators to dig it out, the gravel pits to make the aggregate and the rollers and dozers to apply it. So it just kind of fits us. We’ve been fortunate here that the jobs just keep coming our way. Things are booming here in the great state of North Dakota. We’ve got it pretty good up here right now.”