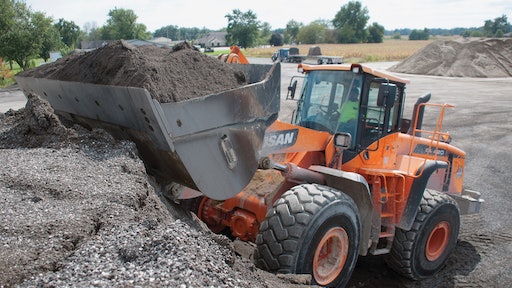 Doosan offers automatic boom kick-out and a return-to-dig feature on its loaders. These features help take the guesswork out of raising and lowering the boom, which ultimately saves time.

When you want to move material quickly, the loader bucket capacity certainly plays a role in how fast you can fill a haul truck, as does the truck box volume. But equipment size isn’t the only thing that matters. How you set up and maintain a jobsite can also influence productivity and efficiency.

“Jobsite layout plays a very important role in a wheel loader’s productivity and cycle times,” says Dick Mars, product application specialist, Caterpillar. “From the stockpile to a crusher, or from the loading zone to a dump target, distance, height, ground conditions and required payload all have a part to play in achieving the highest productivity.”

Performing a jobsite study based on production needs is one of the first steps in managing equipment operations, says Nick Rogers, product specialist/inside sales coordinator, Liebherr Construction Equipment Co. “Having a full understanding of output requirements, utilization rates of the equipment and necessary cycle times all play a pivotal role in the layout of the jobsite and the machine efficiency,” he adds.

“Using a wheel loader with a bucket capacity of 2.5 cu. yds. with a 10-cu.-yd. truck means you could fill that truck in two minutes,” notes Michael Stark, wheel loader product specialist, Doosan. “Excluding any wait time, you should be able to move 30 trucks per hour.

“If that cycle time creeps up even a seemingly small 15 seconds, it will take three minutes to load that same truck, dropping the loads per hour to 20,” he points out. “Now you’ve lost 10 truckloads per hour. In an eight-hour day, that equates to 80 trucks. That’s a lot of dirt you aren’t moving. As the numbers show, it’s essential to create an optimum jobsite layout.”

A good place to start is to evaluate material placement.

“Positioning materials throughout a jobsite has to be done strategically in order to keep costs down,” says Sam Shelton, marketing administrator, KCMA Corporation. “In some cases, this is a very difficult feat to accomplish, depending on the amount of acreage you have to work with. But shorter distances between materials will naturally create faster cycle times.”

“Being able to shorten the distance from load to discharge points will ensure optimum operations. So will reducing obstacles between these points and providing a safe and smooth work area for the loader/operator,” says Rogers.

If materials such as gravel, pipe or even attachments need to be moved onto a jobsite, establish a designated area for them and maintain that location. “Don’t drop off supplies in random places,” says Stark. “Many wheel loaders have backup cameras. But if operators are constantly worrying about obstacles behind them, they will move more slowly around a jobsite, thereby reducing productivity.”

Keeping a jobsite neat and orderly also reduces potential work hazards that could damage the loader and/or cause operator fatigue. “This is a safety concern that can affect operators and other individuals on the jobsite,” says Rogers.

Safety on the jobsite includes ensuring there are no crossing traffic patterns. “In addition, having well-lit, well-marked traffic indicators is essential to a safe and productive site,” says Shelton. “Limit nonessential vehicles on the jobsite, especially maintenance vehicles, etc. — anything that might be in the site line or traffic pattern.”

Keeping the jobsite level is important, as well. “Slopes and grades affect not only the wheel loader cycle time, but truck traffic,” Shelton comments. “I have seen sites where trucks are in a circle pattern and the loader takes the brunt of the slope by traveling down to get material, then backing up the slope in reverse to get in position to load the truck. On top of that, the site had a trailer for check-in at the top of the area used for the loader to turn around. This jobsite layout was not only inefficient and taxed the wheel loader, but it was not a safe traffic pattern either, since drivers were crossing the path of a wheel loader backing up a slope!”

Once material piles have been strategically located, attention should turn to wheel loader and truck positioning. “Loading and discharge is the job of a wheel loader,” says Rogers. “Being able to set up a jobsite that allows the operator to do this in the most efficient way will positively affect jobsite productivity.”

According to Shelton, trucks should always be positioned vertically to the material pile and lined up parallel to each other, with 3 yds. between each vehicle. “This will increase the operator’s truck loading due to less travel distance, because the wheel loader must travel horizontally toward the side of the truck,” she explains.

Mars recommends positioning trucks at a 30° to 45° angle to the material being loaded. “The loader should load the bucket from the material as square as possible to the face and dump into the truck, also as square as possible in a V-pattern,” he states. The loader should be moving no further than 1.5 to 2 tire revolutions between directional shifts.

Stark advocates locating trucks at a 45° to 60° angle to a pile. “How you position the truck is probably more critical than anything else,” he says. “You want a minimal angle so operators aren’t spending a lot of time turning around. Seconds do count.”

It’s important to maintain an optimal working distance between the truck and wheel loader. While closer is better, there is a point where they can be too close. “When that happens, operators have to wait for the loader arm to raise up high enough to dump,” says Stark. “That can add as much as 10 to 15 seconds of time to a cycle because they have to stop and start again.

“It only takes about 6 to 7 seconds to raise the boom,” he continues. “Wheel loader operators should position themselves at that distance from the truck so they can raise the boom as they are moving forward, all without stopping.”

To complement efficiencies gained with an optimal jobsite layout, manufacturers offer features on their wheel loaders that can make it easier to maintain short cycle times.

In addition, lockup clutch/torque converters have been incorporated into the company’s high-production loaders to provide direct drive to boost fuel economy, trim cycle times and reduce heat, particularly for load-and-carry applications. “Each of these options increases the wheel loader’s ability to fill the bucket faster, while reducing wear and tear on tires, and improves fuel economy,” Shelton notes.

Doosan offers automatic boom kick-out that allows operators to set boom height based on truck box height; at the touch of a button, the boom will automatically stop to this predetermined height. A return-to-dig feature automatically stops the boom and adjusts the bucket angle so the operator can quickly grab another load. “Wheel loader operators in high-production applications make a lot of repetitive motions,” says Stark. “Both of these features save a lot of effort for them. They also take out a lot of the guesswork associated with raising and lowering the boom, which ultimately saves time.”

Ride control features are also becoming common. “Our Load Isolation System acts as a shock absorber on the boom cylinders to smooth out the ride, so if an operator goes over a bump, the bucket doesn’t move,” says Stark. “It’s a great feature for all loading and movement situations, especially if an operator has to travel a long distance. Plus, it helps reduce spillage.”

Ride control is standard on all production-size Kawasaki-KCM wheel loaders. “Without it, fuel consumption could be affected because the operator may compensate with lower travel speeds to prevent spillage, resulting in longer cycle times, which could lead to trucks stacking up,” says Shelton. “A constant raising and lowering of the engine rpms will also increase fuel consumption because of the stop-and-go effect.”

Many manufacturers offer payload management/load weighing systems that can improve both loader and operator productivity.

A payload management system provides an accurate measurement of material before it is loaded into the truck. “This can mean fewer wasted loading cycles, lower fuel consumption, precise material inventory and accurate invoicing to the customer,” says Shelton.

A scale system also takes the guesswork out of the loading cycle for the operator and directly impacts operator efficiency, says Mars. “For example, consistent bucket loads improve overall operator accuracy and reduce fuel consumption as fewer incorrect bucket cycles are performed,” he notes. “This keeps waste to a minimum and allows more trucks to be loaded faster and more accurately, increasing overall truck volumes, which impacts the bottom line.”

What's Your Best Bet to Get the Load Out