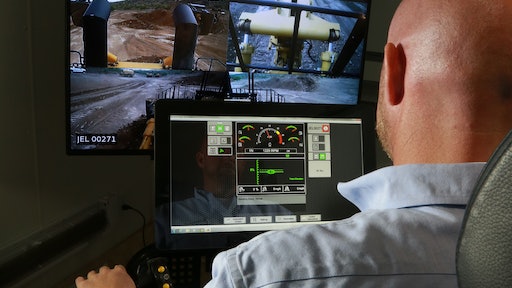 The Command Remote Operator Station allows the operator to be removed from the operating environment.

Caterpillar demonstrated its remote operator console for dozers during a meeting prior to MINExpo this year. We were allowed the opportunity to operate a D11T dozer located south of Tucson, AZ from a room in Caesar’s Palace in Las Vegas, NV. This system was intuitive and provided precise control of the dozer while we were located hundreds of miles away in an air-conditioned room.

This technology is a building block of Caterpillar’s Command system. In early 2015, Caterpillar introduced an updated machine on-board system that supports full scalability all the way from the Remote Operator Console to Semi-Autonomous Dozing. These products build off of the same base remote control kit and add new kits as the level of autonomy is upgraded. The Command for dozingremote station is available on the D10T, D11T and D11T Carrydozer (CD).

The remote operator station has ergonomic enhancements from a more familiar, seated position to make it more comfortable for full-shift operations day after day. It also eliminates exposure to operational hazards by simply removing the operator from the machine.

The lightweight design is easily fitted to whatever environment the customer’s requirements dictate. Consisting of a tubular frame, Cat seat, joysticks and pedals, the Remote Station is similar to the actual cabof a dozer. The controls, icons and alerts found in the dozer cab are replicated on the station, greatly reducing training time and change management for experienced Cat dozer operators.

Building upon the capabilities of the Remote Operator Console, the station enables customers to operate more than one dozer from a single station. Each machine must be equipped with the appropriate hardware and cannot be operated simultaneously with other dozers. Switching control between machines is simple and quick.

Command for dozing includes the option of on-board digital cameras and a microphone hardened for use on dozers. This system provides the operator with visuals from the left and right cutting edges, as well as the top/center of the blade and a rear view that includes the ripper. The video and audio from this system is streamed back to the remote operator station to provide additional information directly from the machine. This supports operations with multiple access points where the radio network expands to cover greater distances.

It can also account for obstacles that would impede a direct point-to-point connection such as the backside of a stockpile.

Starting with a Remote Operator Station, a mine site can scale up to Semi-Autonomous Dozing capability with the addition of an on-board planner system, MineStar Office. The site may also need to upgrade its wireless communication system and radio network to support the increased bandwidth of video from multiple dozers. Command for dozing’s semi-autonomous system will be available only on the D11T and D11T Carrydozer (CD).

Semi-Autonomous Dozing allows an operator to sit comfortably and control multiple dozers from a Remote Operator Station while automating the dozer push process. This solution makes next-generation dozing a reality by allowing operation of dozers from a remote location either on the mine site or miles away, and reduces costs by tying multiple machines to a single operator and station.

In addition to the features of the Remote Operator Station, Semi-Autonomous Dozing provides Situational Awareness with 2D Computer Generated Imagery. It also includes a Tactical Planner System that features real-time terrain mapping through a Global Navigation Satellite System. This system reacts in real time to mapped environmental changes, and is designed to handle operator interventions quickly and smoothly.

The step-based approach to Semi-Autonomous Dozing allows customers to introduce technology to the mine when they are ready while leveraging their initial investment. ABA, Autocarry and Automatic Ripper Control are all necessary to begin Semi-Autonomous Dozing. The system also requires Terrain to assist with productivity to a design plan.