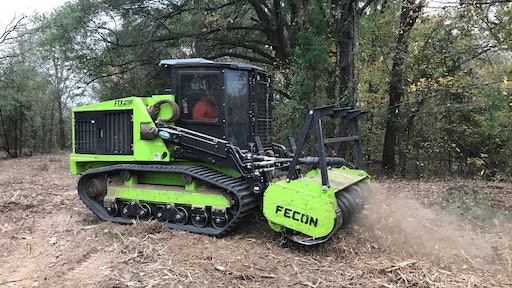 The McAlester Army Ammunition Plant sits on 45,000 heavily wooded acres in southeast Oklahoma, and is one of the Army’s premier bomb and warhead-loading facilities. While the munitions produced here defend the country abroad, the depot itself faces an unlikely enemy at home: vegetation growing out of its boundaries and threatening to overtake the area.

Lucky for Uncle Sam, the Army drafted Bushwackers Land Clearing LLC, a local contractor armed with a fleet of versatile mulchers, including Fecon FTX 128 tracked mulchers. Its mission was simple: to tame the vegetation and retake the depot.

At  McAlester, there are hundreds of bunkers housing munition storage, each arranged symmetrically in rows called magazines. Each bunker has a round top, like an earth-covered igloo, with the slope of the roof varying from 60% to 100%.

Bushwackers was tasked with clearing the overgrown brush and vegetation from encroaching on the bunkers. Gullies and washes with steep banks also have to be cleared. The vegetation is a mixture of brush, trees and grass. The terrain is also varied, with creek beds, flat soil and hilly rocky slopes.

“It’s our job to push the tree line back, mulching everything to create a new fire break,” says Jerry Arthur, Bushwackers president. “Removing the brush also eliminates potential hiding places, allowing the guards on patrol a better view of the surrounding areas.”

On any given day, Bushwackers has up to 10 machines on site, ranging from brush mowers for grassy areas, to tracked mulchers and excavator-mounted mulchers. Typically, crews top the trees with Caterpillar 320E crawler excavators and excavator-mounted mulchers, then mulch the limbs and tree remainders with an FTX128. They also use a fleet of Caterpillar 299D XHP compact track loaders equipped with a Fecon Bull Hog mulcher for brushy material.

Crews feed the FTX128 a steady diet of brushy materials on up to 30- to 40-in.-diameter water oaks. The mulcher can even take down invasive Eastern Red Cedar up to 48 in. in diameter, especially if they can use the tree’s lean to their advantage.

When Bushwackers first purchased the Fecon rotor heads, the only available options were carbide hammers or self-sharpening Samurai knives. Arthur chose to mix and match teeth: carbide on the outside two-thirds  and Samurai on the interior third of the rotor. The carbide hammers have a long lifespan, but pulverize rather than cut. The Samurai teeth have a shorter life span but are more efficient at cutting.

The mix helped improve efficiency, but Arthur still felt they were spending too much time maintaining the self-sharpening Samurai knives. While much sharper than the carbides, the Samurai knives lost efficiency after a few hours of use and would have to be replaced. He reached out to Fecon, and after visits with engineers, several rounds of prototyping and more retooling, the company released a new version cutting blade to the public, called the Viking knife.

Rather than self-sharpening, the Viking knives are designed to be sharpened by the user. Like the Samurai knives, the Viking blades cut the wood rather than smashing it. Bushwackers' operators sharpen the knives after every 10 hours of use, which takes about two minutes per teeth. Yet, the knives last 150 to 200 hours, produce a finer mulch product and use less horsepower.

Designed to be Durable

Designed with longevity in mind, the FTX128 uses components that exceed the amount of power used, and is programmed so that when the engine is working hard, it uses power management: the machine cuts hydraulic power to the head so the engine stays in its torque curve, preventing overloading and maximizing power.

A large reversing fan prevents the engine from overheating, and blows debris away from the cooling system. While designed to keep debris out of the engine compartment, Bushwackers’ operators check the engines for debris once every other month.

The power, longevity, and low-maintenance of Fecon equipment is important to Arthur and his team at Bushwackers, but what keeps him coming back is the face of the organization.

[VIDEO] Fecon Enhances Functionality of FTX128 for CTL Use

Tom Hover, Fecon Tractor Product Manager, discusses features of the FTX128 forestry mulcher and how the power package and other features allow it to be used similar to a compact track loader
March 8, 2017

The Rayco C200 forestry mulcher features a narrow profile making it ideal for ROW clearing on narrow lines or for use in larger scale clearing projects
Rayco Mfg. Inc.
February 28, 2017

The FTX128 is a purpose-built track carrier offering up to 60-gpm high flow/26-gpm low flow hydraulics for attachment versatility.
February 24, 2017

Maximize the Return on Mobile Mulchers

Gain more return on investment by selecting the most appropriate equipment to tackle your land clearing task.
April 16, 2015

Loader designed specifically to deal with the arduous working conditions found in the forestry and timber industries
JCB
March 9, 2015