Put a New Burst of Life Into Old Pipe

Pipe bursting lets you break out the old and pull in the new. 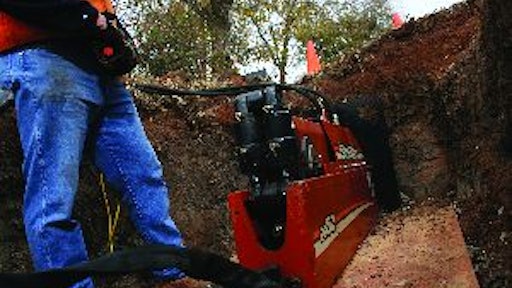 Pipe bursting is becoming an increasingly popular means of replacing old pipe due to the limited restoration costs and minimal social impacts to the local community. However, it's important to be aware of the conditions and applications to ensure a successful installation.

As the nation's underground infrastructure ages, pipe bursting has gained momentum as an alternative to more traditional rehabilitation methods. It can be faster, more efficient, cheaper and less disruptive than open cutting. Unlike pipe lining, it offers more than a simple cosmetic fix, providing the opportunity to upsize utilities to provide additional capacity. It can eliminate some of the engineering and permitting needed to get a relocation project off the ground. And, since new pipes are installed where the old pipes existed, the risk of hitting or damaging existing utilities is minimized.

While pipe bursting has been used in the U.S. since the early 1980s, it's only been within about the last decade that it has taken hold and become more popular. As the technology continues to evolve, so do the size and complexity of projects.

"Initially, it was pretty much confined to replacing low-pressure, cast iron gas mains with HDPE pipe," says David Holcomb, vice president/regional manager, TT Technologies. "But now we're seeing it being used to replace potable water and sanitary sewer lines, as well, and in diameters that range from 3/4 to 54 in. (O.D.)."

To determine if pipe bursting is a viable option for a particular project, ask questions about the environmental/social impact, type of host and replacement pipes, soil conditions and depth/length of pipe. The answers will influence a particular job's success rate and will help determine whether or not it can even be done.

What is the impact?
Like horizontal directional drilling, pipe bursting has a minimal impact on the environment when compared to open-cut trenching. You only need to move dirt for entrance and exit pits, and any service connections.

"You don't have to dig up the entire street," says Holcomb. "That means it's usually faster, because there's less excavating and you don't have extra time required for restoration after a new pipe has been installed."

That can lead to time savings in other areas, as well, such as less disruption to traffic, minimized bypass pumping for sewer systems and shortened duration of temporary services that may need to be installed for water. "If you can replace a pipe via bursting, it's typically faster, so those temporary services don't have to be in for long periods," Holcomb states. "Any time there's a time savings, there's also a cost savings, because time is money."

Pipe bursting is a great choice for rehabilitation in highly populated areas, says Matt Collins, product manager, compact utility and pipe bursting, the Ditch Witch organization. "When you look at open cut, you may run into social impacts on the community," he says. "You're looking at tearing up streets - some of which are in areas where you have store owners who make a living by the traffic that goes up and down the street." As such, the social impact costs must be weighed along with the restoration costs for replacing the roads.

While pipe bursting can be faster and less costly, there are still situations where open cut may be preferred. "If there are a lot of laterals or taps, it doesn't make a lot of sense to burst, because you need to expose those laterals. This requires that you dig a pit," says Collins. "In these situations, open cut trenching would be a better choice."

Pneumatic systems use a bursting head that is driven by compressed air. A cable is hooked to the bursting head to guide it and provide constant tension. As the head moves through the host pipe, it fractures it via dynamic energy. Fragments are driven into the surrounding soil, the soil is displaced and a new pipe is pulled in simultaneously.

Static systems utilize some type of hydraulic power to either turn a winch pulling a cable or push a rod through the ground and pull it back. The rod is attached to the expander and the pipe, and raw power is used to pull it through the ground, fracture the host pipe, displace the soil and pull in the new pipe. Conical-shaped heads are used for fracturable pipe, while bladed heads (either triple- or single-blade) are used to cut HDPE, steel and ductile iron. "It's important to understand the different types of pipe, then set yourself up for success by running the right head for the right type of application," says Collins.

Some replacement pipes can be pulled with either system. However, if you're pulling PVC pipe, a static system would be used because of the physical properties of the pipe. It tends to be more rigid, and the impact of a pneumatic system can fracture it at the attachment point. Ductile iron and steel also require a static system.

What are the ground conditions?
With any type of trenchless technology, understanding soil conditions plays a big part in your success. "The best scenario is original compacted backfill, soft to medium clays and medium-dense sand," says Collins. "As you get into loose gravel, sand, cobble, underground water, hard clay or rock, it gets more difficult."

That's because the best success occurs where soil surrounding the pipe can be readily compacted by the bursting operation as it is displaced. This minimizes surface upheaval and keeps the hole open while replacement pipe is being installed.

Static systems work well in sandy soils because they can minimize the tendency for lightweight replacement pipe to rise upward, and in projects below the water table because the water acts almost as a lubricant. "If you're pounding with a pneumatic machine, the same sandy condition will tend to dewater the sand around the machine and the pipe. [This creates] an excess amount of friction, which will eventually stall the process," says Holcomb.

How large is the upsize?
Size-on-size bursts have become fairly run of the mill. Challenges come in when there is a double-, triple- or greater upsize.

"Double-ups, such as going from an 8- to a 12-in. pipe, goes from easy to challenging," explains Eric Nicholson, director of global and key accounts, HammerHead Mole. "When you upsize three sizes or greater, such as from an 8-in. to 14- or 16-in. pipe, that's where it goes from challenging to extremely difficult/experimental.

"When you're going through the path of an existing pipe, you're trying to push the soil out of the way and hold it back. That can be a challenge," he continues. "An additional challenge is that the center line of the existing pipe and the center point of the new pipe can be in two very different locations."

In this situation, the host pipe can start breaking too far in front of the replacement pipe, creating a plug in front of the burst head. "The pipe can also break and fall into the bottom part, which can create a ramp for the burst head to ride on top of and change the flow of the pipe," Nicholson points out. "So if there's a large upsize, you will have to ask a lot more questions."

How deep and how long an install?
Jobs have been known to successfully go to 50 ft. and more. So depth is more of a concern on the shallow end of the scale, rather than the deep end.

Because the bursting action can cause ground upheaval, the deeper the pipe, the better. "If you're shallow and expanding the soil, you might get ground displacement to the top or to the side," says Collins. "That can be especially crucial if you're bursting underneath an existing building or street, because you can crack the concrete or asphalt. Our goal is to eliminate upheaval, so deeper is better."

Based on industry experience, a rule of thumb of 10 times the upsize diameter has emerged. For example, if you have an existing 8-in. pipe and you're replacing it with a 12-in. pipe, you will need a 15-in. O.D. expander to pull it in. That's an increase of 7 in., so you will need to be at least 70 in. deep to ensure you don't have soil displacement. Ditch Witch recommends for every inch in pipe diameter, you should be at least 12 in. deep.

Typically, pipe bursting is completed in lengths between 300 and 450 ft., which corresponds to the typical distance from junction box to junction box, or from manhole to manhole. Longer runs are possible, but they may require larger tools.

Expanding prospects lie ahead
The prospects for pipe bursting are expanding as the U.S. infrastructure ages. Replacing old sanitary sewer lines has been the primary driver behind the current technology, due in large part to EPA mandates put in place to eliminate sanitary sewer overflows. "Many cities' water systems are also in need of repair. But they're not creating the environmental issues that sewer systems are," indicates Nicholson.

"Overall, there is a strong trend toward a lot more pipe bursting in the very near future," he continues. "Communities are needing to replace pipe for a number of reasons, including under-capacity, damage, etc. And as acceptance becomes greater, the overall ability and availability of pipe bursting will grow."

As pipe bursting technology continues to evolve, the applications will evolve, as well. "We feel there are some big opportunities with pipe bursting," says Collins. "The more we can do without disrupting the surface, the better off we are. We're finding more ways to do things more efficiently."

"Bursting has a lot of opportunity and can help save communities money as they look to rehabilitate their lines," adds Nicholson. "Be aware of the technology, and be willing to try something different."

Report provides a comprehensive analysis of the trenchless pipe rehabilitation market as well as future prospects through 2025
December 16, 2019
Follow Us