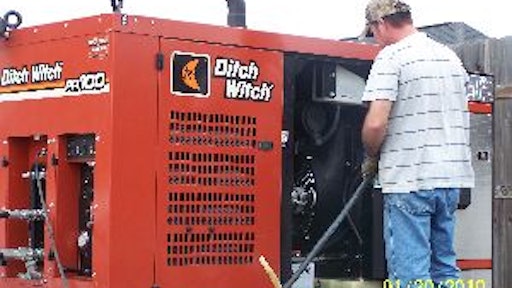 The city of Groves, TX, had a big problem on its hands. A 665-foot section of underground truss pipe (plastic pipe with a concrete-filled, hollow wall) was in need of replacement. The pipe was located on an easement, with an apartment complex to the right, and a subdivision to the left. Trenching for that much pipe would cause a major disruption in traffic, utilities and the peoples' lives in the adjoining neighborhoods. A huge amount of time and money would be dedicated to rebuilding fences and driveways that were torn up during the process.

Traditionally, the Houston area used the pneumatic method for this type of project, which could create lateral cracks in the surrounding utilities due to concussions generated by the process. The 665-foot section of truss pipe was also located only three feet from a water line. The project team was concerned that the pneumatic method may cause water to leak from that line two or three months after the project was complete, thus taking them back to square one with the neighborhood disruption.

The city put the project out for bid, and Simco Enterprises won. Simco considered using its Ditch Witch horizontal directional drill, but it didn't fit that application. The recommended drill also lacked the tools necessary to accommodate different sizes of pipe in this section. Sales Manager Jason Collins and his team from Ditch Witch of Houston offered to deliver and demonstrate a pipe burster to Simco, with no obligation.

The demonstration led to the Ditch Witch Organization's first sale of the PR100 pipe bursting system in the United States. "We were impressed with the durability and strength of this product, along with the people supporting it," said Mike Suire, general manager of Simco Enterprises, who has 18 years' of experience in trenchless pipe installation. "Underground utility installation can and does present an abundance of adversity.

"The PR100 demonstrated the progress of this technology over the past two decades. By purchasing this new machine, Simco Enterprises intends to utilize its versatility and production efficiency while minimizing the disruption to the surrounding area and people."

In this instance, the 665-foot section needed pipebursting, but the project held many challenges. The first obstacle to overcome was the potential disruption to utilities, driveways and fences. The PR100's trenchless method turns this into a non-issue. It does not affect the existing infrastructure while installing the replacement pipe. The second obstacle was the potential damage caused by "hammering." Not a problem. The PR100'as static system uses hydraulics that dramatically lessens the vibration to the ground and existing utilities, thus solving the hammering problem during the project and the potential fallout afterward.

In the past, cities in the Houston area had experienced problems with equipment not being able to burst the truss pipe or handle the job, so they had to open-cut the pipes which caused a major disruption. On this job, they had the right equipment. Out of 100 tons of pulling force that the PR100 is capable of, it never exceeded 36 tons of pulling force and Simco was able to complete the 655-foot pull in just over two hours.

Perhaps the biggest concern was the truss' PVC pipe material itself. It stretches. Solution: The PR100 has three different cutting edges for different-sized pipes. Think of it in relation to a clock on the wall. It grips the pipe at 3:00, 9:00 and 12:00 in the front where it's narrow, so it stretches and cuts as it pulls in the new pipe.

Everyone likes a happy ending, and the City of Groves and its residents have one. Simco Enterprises has purchased a Ditch Witch PR100 pipebursting system and the company is very happy with its performance, reliability and the support provided from Ditch Witch of Houston. Other cities and contractors are also strongly considering the PR100 due to these same characteristics.

Ditch Witch's HX30G vacuum excavator features the low-profile design of the HX line but is available at a lower price point.
Ditch Witch
December 10, 2019
Follow Us