HDD Rigs Get Simpler, Yet Smarter

Advanced designs plus a diversity of applications fuel a resurgence in the HDD market. 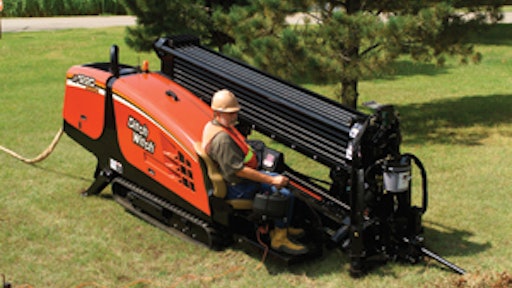 Since late 2003, horizontal directional drilling (HDD) contractors have been enjoying a much calmer business environment in a market poised for steady growth. This growth is enhanced by increasingly advanced drill rigs that improve efficiency and simplify operation. According to several manufacturers, the future of HDD appears bright, since this time around the players — and the equipment — are smarter.

"It's been an education," says Gaylord Richey, territory manager, Astec. "We as manufacturers are smarter than we were 10 years ago. We're building more powerful machines with improved electronics. Engineers who spec the jobs have a better understanding about areas where they can best utilize HDD. Overall, we're better educated — manufacturers, engineers and operators. Today, the industry is more viable than it was the first time around. More avenues are open, and we'll see more steady growth."

Smarter equipment comes in the form of increased automation and more advanced electronics. "In the last few years, there have been several advancements to simplify operation and to help operators, particularly those who are new, make fewer mistakes," says Ed Savage, trenchless segment manager, Vermeer. "They allow the rig to do more of the work so there is less reliance on operator judgment."

While an HDD rig isn't necessarily difficult to operate, it does take concentration on the part of the operator, especially on long bores in varying ground conditions where it's harder to maintain speed and flow rates. That's where rigs with auto drill or cruise control can help. This feature is similar to cruise control in your car or truck. Once the optimum speed is determined, the operator can set the machine to automatically hold that speed. The speed can also be recalled for installation of successive rods.

"Once you get started drilling, you can just flip a button and the machine will monitor the pressures of both rotation and thrust," says Savage. "Through varying conditions, it will automatically make adjustments to maintain that speed."

Keeping a constant speed is important for retaining just the right amount of drilling mud in the hole to lubricate the product and turn the soil into cuttings. "Setting the cruise control on the pullback, when timing is especially critical, prevents the operator from over pulling or under pulling," adds Richard Levings, senior project manager for HDD, the Ditch Witch organization. "That way, they get the most consistent rate of installation with the right amount of mud flow. It also allows for better productivity, and it's easier on the rig because the machine is applying the force."

Cruise control provides the added benefit of enhancing operator comfort. "It reduces a lot of fatigue in the tough or long bores where it takes a lot of time to pull back or bore out one drill rod," says Savage. "It also takes some of the human error out of the process."

"Drillers sit for hours trying to find just the right spot, then hold it so the pipe comes back at just the right speed," adds Richey. "Now, instead of having to find that ‘sweet spot' and hold it, they can hit a button and let go of the controller. Overall, it speeds the entire drilling process. Rigs have really come a long way as far as cutting down on the fatigue and allowing for better performance of the drill."

"In the construction industry, HDD is still in its infancy," he continues. "We're continually finding ways to simplify the process and make it more accurate, efficient and a lot easier on the guys in the field."

"We're all moving and progressing toward simplifying the number of things an operator has to do to make the unit operate," says Levings.

For example, when you close the wrench on a Ditch Witch rig, the drilling fluid automatically shuts off. In addition, the control handle for threading and unthreading pipe simultaneously clamps and rotates with a single push in one direction, while controlling the speed at which the pipes are threaded.

"When an operator threads pipe together and takes it apart, he can get out of timing and prematurely wear the threads. While pipe is a wearable item, it's a sizeable investment and you want to get the longest life out of it," Levings explains. "By having the rig control certain tasks, such as threading and unthreading, we've tried to automate the tasks where the most mistakes are made. That way, if there's a new person on the crew or if someone is sick, the replacement operator can be proficient in the operation of the machine."

Automatic loading and unloading systems and onboard cranes have dramatically changed the way pipes are handled. Richey points out that it wasn't that long ago when an operator had to physically do the task by hand. Now, it has progressed to where the rig automatically goes through a cycle of loading and unloading at the flip of one switch.

Safety features are also making their way to machines, as evidenced by the exit side lockout system in place on Astec machines. The locator can use a handheld remote to lock out the operator to prevent accidental rotation, thrust or mud flow while changing tooling.

To keep pace with increasingly tougher environmental regulations on certain jobsites, fluid mixing and handling systems are more advanced, and mixing systems are being integrated with cleaning systems.

"In many places, contractors are required to clean up all the drilling fluid and byproduct of the directional drilling process," says Levings. "If you have a long bore or multiple bores in one area, carrying this off in liquid form can be enormously expensive — especially considering that specialized liquid dumping centers are typically fewer and farther between than waste centers or dumps that accept dry material. But by using a mixing and fluid cleaning system — also called reclaimers or recyclers — contractors can take it away as dry material to cut costs."

Other innovations are further enhancing productivity in the drilling process. One example is location technology.

"When you're going under a highway or a building, or any place that has a concrete surface with rebar and wire mesh, the metal distorts the signal that comes up from the beacon housing, which can lead to inaccuracies," says Levings. "But we've seen more precise systems come into the industry, with electronic and componentry advancements becoming available nearly every day.

The electronics are catching up to the industry, and the industry need is driving the development of different electronic packages. It's a natural progression. We tend to focus on the rigs, but it's really more of a system."

Improved location technology is also making it possible for HDD equipment to be utilized in a growing list of a-typical applications, such as auger boring and pipe bursting, as well as sewer and grade work.

You can also find it being used to clean culverts and drainage ditches. "We've come up with a way to clean these areas without using a lot of water," says Savage, who indicates it was developed by Harr Technologies and is exclusively available through Vermeer dealers. "The key is that we use a different style of back reamer that's pushed through the drainage structure. It turns the gravel, dirt or whatever's plugging the culvert, into a slurry for removal. We also have a process where you can reline the culvert by pulling through a new poly liner."

The list also includes installing geothermal heating and cooling systems in an increasing number of government and residential buildings. These systems utilize the earth's constant temperature to regulate building temperature. "HDD equipment is being used to install the loops underground," says Savage. "More people are relying on geothermal systems because they are more efficient. And with the high cost of fuel, people are looking at alternatives to heat and cool their homes."

It's these diversified applications, coupled with a more stable economy and an increased use of HDD equipment in installing standard utilities (gas, water, electricity, phone), that are helping to stabilize the market.

"The current market is very healthy," Savage says. "There was a lot of fiber work done last year, and there's still fiber work going on this year. But the good thing is that there are a variety of different jobs, which keeps the industry healthy. Before the big slow down, it was mostly all fiber work, which gave a false sense of growth in the market. When people quit investing in fiber, there was a drastic slowdown. It looks like it will be more stabilized this time because the market is more diversified."