Directional Drilling In a Caribbean Paradise

Directional drills are used to install utilities on the hills and rocks of the Caribbean Islands. 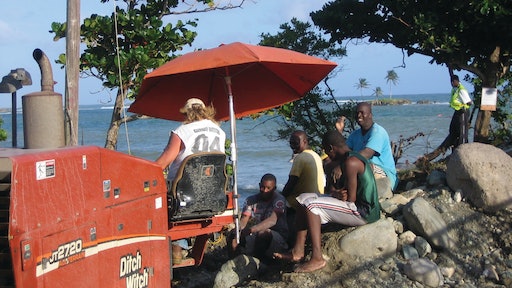 Most of FibraLink's directional drilling work has been completed with a Ditch Witch JT2720 All Terrain drilling system. It uses an inner rod to drive a rock bit and an outer pipe for steering the downhole tool during drilling.

Most people in North America picture the Caribbean as a place with picturesque islands and beautiful beaches surrounded by sparkling blue waters. The days are sunny, temperatures warm and the islands are especially attractive to residents of the northern United States and Canadian provinces during cold winter months.

The Caribbean islands are a perfect place to unwind and relax. But business people who insist on working while on vacation may be surprised to find state-of-the art broadband access that may be superior to the services they have at their offices and homes.

Above- vs. Below-ground Installations

One wholly-owned subsidiary, FibraLink Jamaica, Ltd., has built, owns and operates an undersea fiber optic network link from Jamaica to the U.S., and has made a substantial investment in the deployment of advanced broadband networks that provide voice telecommunications, data services, and subscription video throughout island countries.

Outside plant in Jamaica and other areas is both aerial and underground.

"Location, risk factors, local practices, terrain and other considerations determine what goes aerial and what goes underground," says Walt Malone, International Underground Technologies, a Florida-based underground construction contractor for FibraLink. "Trinidad, for instance, is not considered in the hurricane belt and most plant is aerial. The Bahamas, on the other hand, is about 25% underground. Jamaica is about 20% underground.

"Most underground in its system is to provide redundancy, 'harden' the system to protect it from weather and other environmental-related damage" he explains, "and to place cable to service hubs from which voice, telecommunications, data services and subscription video go to customers."

Malone says underground segments usually involve placement of one or two 3-in.-diameter HDPE ducts. A manhole is placed about every 1,000 ft. of a run to facilitate cable installation. Cables installed include both fiber and coaxial, depending on the type of requirements.

Underground cable is installed by open cut and horizontal directional drilling (HDD). "In Jamaica, for example," Malone says, "about 70% is open cut with 30% by directional drilling. However, it appears over time that the percentages will get closer as we move into more urban areas."

HDD is used to bring cable from sea landings ashore and to route cable to the landing station where data traffic is routed into or out of the network.

"In Jamaica, there are six sea landings," Malone notes. "Two bring cables that link the country to the Arcos ring and CFX express route, providing two diverse routes to North America and the rest of the world. Four comprise segments of redundancy rings between cities. Right now, the No. 1 job is completing redundancy rings to reduce the chances of interruption of services. The rings include aerial and underground cables, which follow different routes."

Drilling and Cutting Uphill and Downhill

For open trench work, FibraLink uses a 115-hp Ditch Witch RT115 with saw and chain trenching attachments, as well as a 45-hp model 3700 with trenching and plowing attachments and utility backhoe and hydraulic boring attachment. An FX30 vacuum excavator cleans up excess drilling fluids, cleans out manholes and sucks rope through pipes for pulling cable.

Most of the directional drilling has been completed with a Ditch Witch JT2720 All Terrain (AT) mechanical, dual-pipe drive drilling system that uses an inner rod to drive a rock bit and an outer pipe for steering the downhole tool during drilling. The outer pipe also provides rotary torque for the hole opener during backreaming. The system is designed to drill in all types of soils and can drill through rock, cobble, and gravel without the use of a mud motor and the large volumes of drilling fluid required for mud motor operation.

"This machine has been called on to perform a variety of jobs in a wide range of conditions," says Malone. "In the past five years, it has completed approximately 800 bores with the longest being 660 ft. About 70% of the HDD installations have been through rock."

Drilling supervisor Dan Beasley says one of the most memorable HDD projects was in Trinidad for pipes brought ashore from an ocean landing. The drill was on the side of a hill and the grade of the pilot bore was minus 55°. Excess drilling fluid had to be pumped up the incline to the vacuum truck using several diaphragm pumps stationed up the bore path.

Another challenging project was the 660-ft. installation under the Hope River in Jamaica after Hurricane Gustav knocked out a bridge from which system cables were attached. Entry point of the pilot bore was on a hillside 40 ft. above the river, and the pilot bore proceeded down at a minus 55° angle. It leveled off 22 ft. under the river and proceeded to the exit point on the opposite side. Three 3.3-in. pipes to hold cable were pulled back through the bore hole.

The self-contained JT2720 AT has a 125-hp diesel engine and develops 27,000 lbs. pullback, up to 3,200 ft.-lbs. of spindle torque and spindle speeds to 225 rpm. Ditch Witch 750 electronic guidance system was used to monitor the machine's bore path so that steering corrections could be made.