Challenges to building the new wastewater tunnel in Austin, Texas, included building parallel to a river and underneath a lake 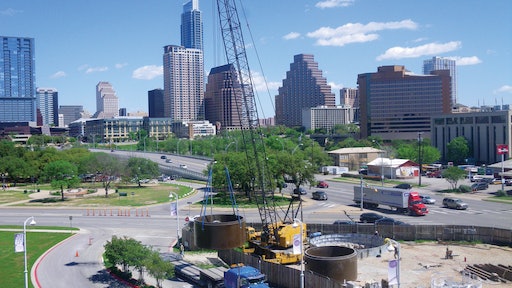 To allow tunnel construction access from five surface locations for the initial segment of the tunnel, SAK/Quest crews constructed four shafts to depths of 75 to 80 ft.

Create a 4-mile-long, downward-sloping wastewater tunnel that runs as deep as 80 feet underground, including under a lake at three different locations

City of Austin planners saw a need for a true state-of-the-art, gravity-powered wastewater system to accommodate Austin’s growing population well into the future. So it brought in the joint venture team of SAK/Quest, consisting of St. Louis area-based SAK Construction and Quest Civil Constructors Inc. of Phoenix, along with Parsons Engineering to create a huge, new Downtown Wastewater Tunnel. The tunnel replaces an inadequate system of 50-year-old, deteriorated concrete pipeline and the associated lift stations that were previously necessary to power wastewater through the sewer system.

The 4-mile-long, downward-sloping tunnel would run as deep as 80 feet underground. It would also run parallel to the Colorado River and underneath a lake at three different locations.

To allow tunnel construction access from five surface locations for the initial segment of the tunnel, SAK/Quest crews constructed four shafts to depths of 75 to 80 feet. In addition, the team set up bypass sewerage pumping to allow an existing lift station to be cleaned and converted into a fifth shaft. By installing a sloping tunnel that utilizes gravity, the city was able to eliminate the need for two lift stations

During the excavation process, the SAK/Quest crew encountered one particularly challenging area of low rock cover. “In an area with less than three feet of weathered and broken rock separating the tunnel from 50 feet of sand and an unlimited supply of groundwater above the rock, the risk of catastrophic failure that could endanger the tunnel workers, city property, a nearby railroad and the general public, was a major concern,” says James Byrd, senior project manager for SAK.

“SAK/Quest offered a solution to lower the tunnel yet still maintain a downward slope to keep the sewer flowing by gravity. The city ordered additional geotechnical drilling, and Parsons engineered a risk-reducing design incorporating the SAK/Quest solution. Subsequently, the risk was greatly reduced, and the new design resulted in the tunnel being safely and successfully excavated through this area.”

In addition, the tunnel houses glass-fiber-reinforced polymer mortar pipe that is expected to last at least 100 years. “SAK/Quest installed centrifugally cast fiberglass reinforced pipe which, unlike concrete, is not susceptible to the corrosive effects of sewer gas,” Byrd said.

“Special cement-free polymer mortar manholes - the largest in diameter of their kind in the nation - were also constructed at the city’s request," Byrd said. "Through the use of these new corrosion-resistant materials, SAK/Quest dramatically reduced potential maintenance and repair costs, resulting in a potential savings of tens of millions of dollars over the lifetime of the wastewater system."

Ditch Witch's Corey Maker provides an overview of the features of the company's new JT24 directional drill, as well as the new Switchback housing.
Ditch Witch
October 28, 2019
Follow Us