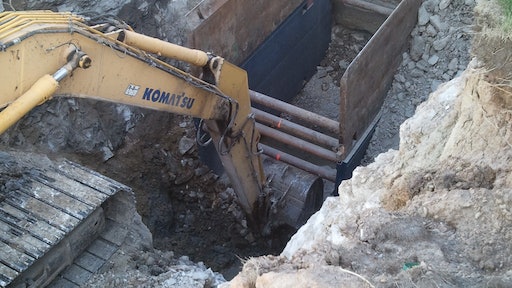 Installing sewer plumbing in an established subdivision that required a combination of open cut and trenchless installation.

When many of the homes in an Olathe, Kan., subdivision were first built, there was no city mainline sewer infrastructure in place. In anticipation of a time when a main sewer line would be installed to connect the homes located within this new development to Olathe’s sewer treatment plant, most homes were built with the necessary sewer plumbing that would allow them to connect with the city’s system when available. In early March 2012, that time had arrived.

Conditions beneath a very shallow layer of topsoil - less than 2 feet in many areas - consist of solid, very hard rock with random layers of shale mixed in between. The installation of the new sewer plumbing present a few challenges.

Video: Rock is No Challenge for Vermeer Axis Guided-Boring System

First, there was the sturdy rock below. Second was the rolling, uneven terrain above. The elevation of homes located along the specified sewer installation route was far from level, composed of a series of gently rolling peaks and valleys. Third was the plumbing already installed for sanitary sewer use originating from each of the homes - many situated at different depths - each of which would need to be connected to the mainline. Lastly, consideration for the established, meticulously landscaped residences was of utmost importance.

Olathe city officials selected local contractor Beemer Construction, headquartered in nearby Blue Springs, Mo., to complete the project, which included the installation of an HDPE sewer line ranging from 8-inch diameter on the upper end to 15-inch toward the lower side; all housed within 24-inch casing.

Originally specified as an open cut job, project engineers with Beemer recognized that the varying elevations of surface terrain would require installing the sewer at depths in excess of 45 feet at places along the route would be impractical for even the most capable trenching equipment. It was also apparent that to achieve the pinpoint accuracy of the grade necessary to accommodate the gravity flow sewer within close proximity to established homes, portions of the project would most efficiently be completed using a trenchless method.

Beemer selected EJM Pipe Services, horizontal boring and tunneling specialists based in Lino Lakes, Minn., to assist with what materialized as an open cut and trenchless combination installation approach.

“I like to compare drilling through hard rock and shale to hand-sawing through a knot in lumber,” said Lynn Miki, a project foreman with EJM Pipe Services. “The inconsistency of the grain and hard texture works against the rhythm of the saw, trying its best to divert a straight cut. The extremely hard rock and unpredictable layers of shale work in similar opposition, it’s really tough to get through it without good equipment that is capable of holding the line, pitch and grade, and not deflect.”

After surveying the terrain and delving deeper into the installation plan, Beemer Construction identified nearly 1,100 feet along the route where digging depths needed to achieve the grade required for the gravity sewer line to function properly just wasn’t going to be feasible using an open cut approach. It was within these locations where they called upon the trenchless expertise of EJM Pipe Services for assistance.

“We’ve dealt with line and grade issues a lot and are always looking for the latest thing to help us succeed,” Miki says. For this project, the contractor used Vermeer’s Axis Guided Boring System. “We used the Axis system with great success to complete several precise, on-grade pilot bores in areas where it just wasn’t practical to trench. It’s important to remember that we are boring through solid rock and shale in very tight areas at depths in excess of 40 feet.”

The Axis guided boring system is a pit-launched trenchless installation method designed to achieve pinpoint, on-grade accuracy while eliminating some of the difficult steps associated with other installation techniques. The guidance system features a laser that determines the line and grade of the bore, enabling on-grade accuracy throughout the process, even in the rock conditions encountered in Olathe.

Outfitted with a tri-cone cutter head, the Axis system led the way, successfully completing several pilot bores up to 450 feet in length and grades ranging from 3.975 percent to just less than 1 percent; necessary to achieve the pitch required to facilitate the sewer’s gravity flow. The varying depths of the many individual sewer lines extending from each home were also a consideration. After pilot bores were completed, a separate crew followed behind using an auger boring machine with disc cutter head to upsize the bore path to the diameter necessary to accommodate the 24-inch HDPE housing. This allowed the crew to jump ahead and keep the project moving forward.

The rolling terrain, which Miki described as a sloping hillside with a fairly significant elevation incline from the launch to exit pits, required one of the bores preparing a launch pit to a depth of 47 feet to accommodate the upward slope of the bore toward the exit pit positioned at 30 feet deep. At these depths considerable shoring was required to secure the walls surrounding the pit.

“The laser incorporated into the drill head of the Axis system projects onto a screen that has a scope similar to a rifle,” he says. “Even the slightest veer up or down or right to left can be adjusted immediately. Once the pilot bores were completed, upsizing and reaming was a breeze. We used the Axis vacuum system to remove the excess spoil during the reaming process. All the pilot bores were completed on target, on grade and on line. Everything worked really well.”

“There are always concerns when drilling through rock about noise, vibrations, even causing cracks and damage to foundations,” Miki says. “Noise is minimal with the Axis system, however. We had people in the neighborhood come out and ask if we were done already.”

Video: Rock is No Challenge for Vermeer Axis Guided-Boring System

May 12, 2009
Latest in Underground Equipment

How to Choose the Best Trencher Chain