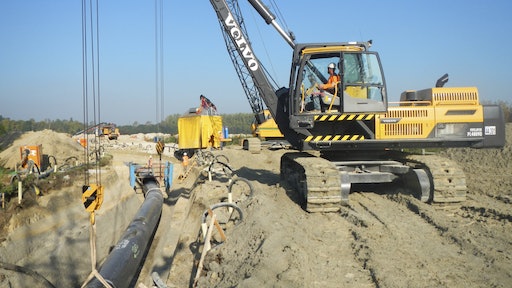 In the final stages of this particular stretch, the PL4809D worked comfortably alongside crawler cranes and also worked alongside conventional side boom pipelayers.

Known as the Arc de Dierrey, a new pipeline skirting eastern Paris will, when completed, cover a total distance of 191 miles and cross five French regions. Being built and funded by French grid operator GRTgaz, with a total project cost of about $890 million, the line will provide a capacity of 15 billion cubic meters of gas a year. The project started in March last year and will provide a link to the new LPG terminal in Dunkerque on France’s northern coast. The Dunkerque-to-Cuvilly section is known as the Hauts de France II pipeline and extending it to meet the Arc de Dierrey will help towards the development of a natural gas network, allowing a supply of natural gas both to France and other European countries. It also has the ability to provide an alternative gas supply to Europe’s biggest energy market, Germany.

The Arc de Dierrey comprises five sections, which are being handled by different contractors. The contractor on the 39-mile stretch is Spiecapag, partnered with Dutch pipeline contractor, A. Hak International. A subsidiary of Entrepose Contracting, itself a subsidiary of the Vinci Group – Spiecapag – is a global specialist in oil and gas pipelines – especially those of large diameters. Headquartered in Colombes near Paris, it has set up its project base in Romilly-sur-Seine.

About 450 people worked on this project, of which 150 were recruited and trained locally by Spiecapag, helping to support the local community, as well as execute the project on time.

About 19,000 independent steel pipes will be used over the total 192 miles. Using 12-meter-long, 48-inch-diameter pipe means that each section weighs close to 13,227 pounds. But this is no problem for the Volvo PL4809D-Series pipe layer with a 90-ton tipping capacity, which was easily up to the challenge. The machine also offers excellent stability and the on-board Load Management System (LMS) advises operators in real time the weight of the load and what can be lifted safely.

“I’m pleased with the overall performance of the machine,” says plant manager, Patrice Decour of Spiecapag.

Operators were satisfied with the cab and the swing ability of the upper structure – a feature not available on traditional side boom pipe layers. The narrow working space in some areas required positioning the pipes behind the equipment, so the ability to simply swing, pick up and re-position the pipe was a considerable advantage. Given the many roads, canals and river crossings along the route, transporting the machine was easy and an additional benefit. The machine can be loaded quickly for transportation without having to disassemble it.

“The machine is well designed, with all the filters grouped together and easily accessible,” says chief engineer at Spiecapag, Stephane Ercoli. “The access walkways are also well done. It’s a machine that inspires confidence.”

In the final stages of this particular stretch, the PL4809D worked comfortably alongside crawler cranes and also worked alongside conventional side boom pipelayers.

Geographically the region is relatively flat with some gentle hills, and despite its proximity to Paris, is sparsely populated.

“The southern section where work began required working through limestone,” says Jean-Paul Chauvin, project director. “The northern section, which encountered more rock, clay and woodland, presented more difficulty and due to the high water table in the region, about nine miles (15 km) of bog mats were required.”

Completing section three entailed crossing the river Seine, a canal and the main railway that runs parallel to it. GRTgaz elected to use a micro tunneling solution. The tunnel runs between Pont-sur-Seine and Crancey to the east and at a depth of 39 feet and covers a distance of 886 feet.

Gas will be pumped through the pipe line at a relatively low 68 bar pressure, but there will be safety shut-off valves at 9-mile intervals. Of the five sections of this project, only two remain to be built, with construction beginning this year.

The line will eventually extend to the south coast and the Arc de Dierrey project is scheduled for completion by the end of 2015.