This year’s rankings -- representing $350 billion in investments -- include an enhanced focus on innovative projects and the countries in which they’re based. 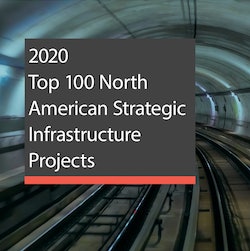 CG/LA Infrastructure, a global leader in infrastructure strategy and project development, has released its 2020 Strategic 100 Top North American Infrastructure projects lists, inclusive of an Impacts list, in which the algorithm was adjusted to highlight the advantages of smaller projects. This ranking -- which represents $350 billion in investments -- is based on data CG/LA has aggregated in its Global Infrastructure Visualization Platform (GViP), which includes quantitative metrics including jobs created, infrastructure sectors, location and value, as well as qualitative data such as strategic and economic value, local benefit, sustainability and business generation.

Though CG/LA has been producing the Strategic Top 100 List for 18 years, this year’s rankings come from the advanced data analytic algorithms and mathematical rankings that power GViP. This platform allows more in-depth insight into the data behind the world’s most consequential infrastructure projects, and the impact they will have on global economic recovery.

This year’s rankings include an enhanced focus on innovative projects and the countries in which they’re based, driven by the advent of new technologies. These technologies are critical in shaping everything from which projects are moving forward and how they’re being designed, to the construction management process and ultimate benefits to end users.

“These are transformational projects that have the potential to spur social good and economic gains,” said Norm Anderson, CG/LA Chairman & CEO. “Infrastructure spending has the potential to be the single most important catalyst to re-energize the economy through job creation, increased connectivity and groundbreaking innovation, however our leaders have failed to make meaningful investments over the last 50 years. If we continue to kick the can down the road, we risk having our economy crumble – figuratively and literally.”