A look at the use of rejuvenation seals in California. 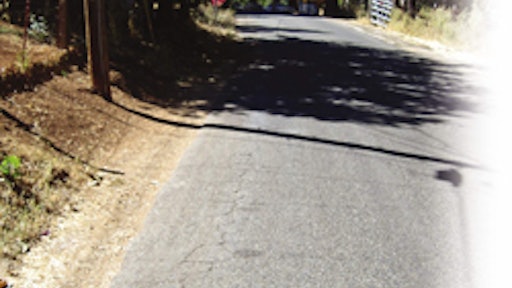 As demands on roads grow greater and the motoring public's expectations rise, a county engineer is often faced with the dilemma of which roads to treat first. In pavement preservation terms, the best roads should be maintained first-before they fail. This is not always possible, and conventional surfacing treatments will not always prevent reflection cracking. The answer is combination treatments that address failures as well as renew the surface. The treatment, which is chosen, depends on the extent of failure. For severe cracking, an asphalt rubber membrane such as a scrub seal may be needed before the surfacing is carried out. For roads where crazing and age cracking are not as severe a rejuvenation seal is an excellent choice. This article discusses rejuvenation seals and illustrates their use through a case study in California.

When pavements get old they become brittle. This is a function of oxidation of the binder and loss of volatiles. Asphalt composition is the main factor that affects oxidation. Oxidation occurs primarily by two mechanisms.

Oxidation: As asphalts age, they incorporate oxygen at reactive sites in the hydrocarbon molecules.

These reactive sites are either hetero-atoms (nitrogen, sulfur and oxygen) or benzylic carbon atoms (in aromatic molecules). Hetero-atoms in unaged asphalt may be polar or non polar, but when oxidized, will become oxides and can participate in molecular associations. This is the source of hardening. Oxidation can be catalyzed too by other components in the asphalt such as metals. The main oxidation products are carbonyls, sulphoxides and nitrogen oxides. These are mostly in the form of carboxylic acids, sulphoxides, ketones and anhydrides.

Volatility: Oxidation occurs simultaneously with loss of lower molecular weight volatiles (oils). This mechanism depends on the asphalt composition and is most likely to occur at high handling temperatures.

Asphalt is a complex mixture of many different organic and sometimes inorganic materials. The materials may be classified in groups of materials of varying polarity, from polar asphaltenes to aliphatic oils. In between there are polar resins and aromatic and napthenic oils. The resins and oils together are called maltenes. The asphalt can be thought of as associated polar molecules dispersed by aromatic and napthenic oils.

As asphalt ages the asphaltenes can become more functionalized and thus can participate in more molecular associations. The resins are essentially made more polar by oxidation of active sites and, as a result have higher levels of associations with other polar molecules-essentially being made into asphaltenes. The oils are lost by volatilization or become functionalized by oxidation-essentially increasing their polarity, i.e. turning them into resins. This creates an imbalance in the dispersion of the associated phases in the asphalt and the dispersing oils, and a colloidally unstable and harder binder is formed. Thus the binder is more brittle, particularly at low temperatures, flexibility is reduced, and cracks appear, propagate and ultimately form potholes.

A rejuvenation seal can then be the best treatment to use. This is done before potholes can form, and when the binder is just losing stone. The rejuvenation seal will help to restore the adhesion of existing stone, bind a new stone layer and extend the life of the pavement.

The use of rejuvenation oils to replace lost oils and soften aged and cracked asphalt has been used for many years in recycling. The mechanism generally agreed upon is that the rejuvenation oils replace the maltenes in the asphalt, thereby softening and healing the existing asphalt and restoring colloidal stability. This extends the life of the existing binder, allowing it to contribute to both the waterproofing process, as well as to the cohesion of the seal binder layer.

To do this, the maltenes must disperse into the existing hard binder. This process is diffusion controlled and depends on the temperature, the viscosity of the binder and the viscosity of the oil. Emulsification makes very fine oil particles, allowing optimum penetration into the aged binder.

A rejuvenation seal is a form of chip seal. It's done by application of a specially formulated product that acts as both the binder and the rejuvenation medium. The product is an asphalt emulsion based on a grade of asphalt chosen for the climatic conditions (soft for cold climates, harder for hotter places). This emulsion contains the rejuvenation oil. This has two effects. The first is to make sure the rejuvenation oil is evenly distributed, and the second is to take advantage of the many benefits of emulsion binders in terms of adhesion and safety.

The emulsion is able to coat the surface evenly, penetrate, and rejuvenate. The binder will then hold a chip rock.

The emulsion also contains polymer modification. This ensures that the oil presence does not decrease viscosity too far and cause flushing problems. The following case study refers to Styraflex ERA, a product of VSS Emultech California.

Eldorado county stretches from the foothills of the mountains above the Sacramento Valley through rugged mountains to Lake Tahoe. The "Golden County" of California has diverse terrain and climatic conditions. Eldorado county is a progressive county and its engineers are always ready to try new products.

The job consisted of several locations throughout the county. The product used was Styraflex ERA, a high binder rejuvenating emulsion with polymer modification.

The road surfaces were distressed by age cracking and raveling, and in normal circumstances would have been resurfaced or overlaid with hotmix. Styraflex ERA represented the most economic method of resurfacing and rejuvenating to prevent reflection cracking, and was capable of giving five to eight years of life before resurfacing may be necessary again.

Weather conditions were fine and warm, and the Styraflex ERA generally penetrated about 1/16 to 1/8 of an inch. The aggregate, a 1/4-inch black volcanic rock, was spread by a computer controlled chip spreader. This allowed a high contrast and hardwearing seal to be formed.

Rejuvenation seals are a method of extending road service life. They are one of a tool kit of pavement preservation and maintenance methods that include slurry surfacing, chip seals and overlays. Used at the right place, Styraflex ERA is an effective tool.