Asphalt manufacturer MPI relies on the VSS Macropaver 12B a slurry seal and microsurfacing machine for pavement preservation. 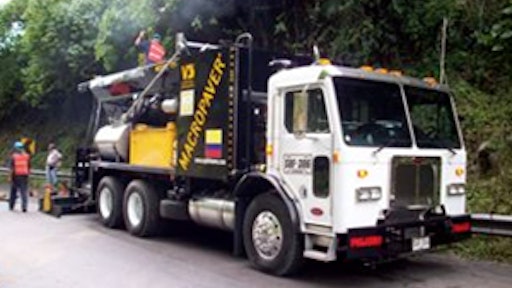 In the tropical latitudes of Colombia, transportation of goods and people has become much easier through a relatively new network of national highways and airports. Though a national roads plan had been in place since the last century, road building and pavement maintenance really didn't become a priority until 2000 when President Álvaro Uribe Vélez pledged to pave and upgrade 2,500 kilometers of highway. This is has been a tremendous step forward for Colombia since 70 percent of all cargo is transported on roads and nearly three-quarters of all dry cargo travels on highways across Columbia's borders to other countries. In addition, the busy international airports and many city-to-city airstrips that handle goods as well as passengers are now paved.

One company that saw a future in pavement maintenance is MPI Manufacturas y Procesos Industriales Ltda. in Bucaramanga, Colombia. MPI began in 1974 through the vision of Mario Mendez, who sought to find products that his country needed. He offered a wax packaging service first, then opened a roofing asphalt plant, and finally a rubber oil blending service for the tire industry. In 1982, MPI partnered with Gulf States Asphalt to create asphalt enamels to coat oil pipelines. The next year, MPI began producing asphalt emulsions to reduce the amount of cut back asphalts (asphalt-mineral spirits) used in road construction. "It was then, when MPI started to gain its identity as an asphalt manufacturer in the road construction industry," said Fabio Mendez, Mario's son and current president of MPI. "Since then it has kept gaining momentum in the road construction industry in Colombia. We offer our customers equipment, asphalt transportation, mix designs, and direct technical assistance to the job."

Not only does MPI service contractors, but it also has a contract division that handles road preservation. It is this division that has taken on Colombian highways and airport runways, as well as some in neighboring countries.  In order to complete these projects, MPI has relied on the VSS Macropaver 12B a slurry seal and microsurfacing machine. This workhorse is one of the fastest slurry seal machines on the market, laying 4 tons of product per minute.  The Macropaver 12B can handle both slurry and polymer-modified microsolutions with finesse. The machine's double-shaft pugmill has adjustable paddles and VSS's pioneering hydraulic fail-safe sequencing ensure consistent pavement quality throughout the paving process, setting a standard for reliability.

"We started using VSS equipment in 1988 at a time when road conservation or maintenance did not have any meaning to the Colombian Public Works Authorities," said Fabio Mendez. "The equipment has always been highly dependable, and the crew enjoys the reliability of the Macropaver, its hydraulics quality, and the latest instrumentation." One new innovation on the VSS Macropaver 12B is the EZ-OP Monitoring System that makes it even easier to train new users because it virtually eliminates manual calculations with its new intuitive controls.

Though MPI often puts these machines to work on heavy traffic airport runways, the company also paves and maintains roads in locations that often challenge conventional machines.  "Although we do not have seasons in Colombia," Mendez said, "we have a strong rainy season throughout the year that is difficult to predict because of the mountainous land and canyons." These geographic features themselves afford their own challenges of terrain that require rugged and dependable equipment that machines of like the VSS Macropaver 12B can provide.

"We understand that, above all, if we want to grow as a company, we have to become a 'solution' in the activity in which we perform, adding value with new asphalt paving technologies and services along with the best price strategies," Mendez said.

Even though MPI is positioned well at time when road construction and preservation is being given national priority in Colombia, the company does face challenges in offering new technologies, especially the concept of microsurfacing. "We are introducing a technique in a country used to using dense grade mixes (very smooth roads)," Mendez said. "We are in the process of changing that concept by making skid resistance and safety a major issue, and a thin layer (microsurfacing) can do the job, last longer, and be more cost-effective. We have also been able to demonstrate microsurfacing as the most appropriate technique when preserving runways for airfields located deep in the Amazon. As a result, the Air Force and aviation authorities have accepted microsurfacing in their maintenance programs."

MPI has been able to demonstrate the results of these innovative solutions by example through the work they have done using Macropavers, not only to create new road surfaces but by maintaining existing pavements. "Our biggest success has been the acceptance of slurry microsurfacing in the conservation of national highways in Colombia from major road contractors."

MPI continues to transform the Columbian landscape, providing new solutions and foresight for that country's transportation needs.  And the VSS Macropaver 12B is helping the company do it.