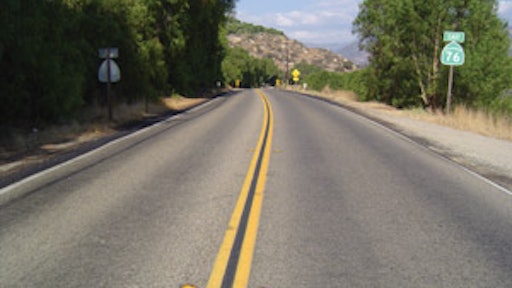 Contractors must identify, define and overcome obstacles on every job. Intermountain Slurry Seal recently did just that to successfully microsurface a busy 15-mile California highway at night.

In recognition of this achievement, the Salt Lake City, UT-based contractor was honored for a second straight year with the International Slurry Surfacing Association (ISSA) President's Award.

"[Public] agencies are better off taking care of their best roads first," says Rusty Price, general manager of Intermountain Slurry Seal's Utah branch. With the company for more than 23 years, Price has been involved in all aspects of the company's business. His involvement has contributed to the company's 20-year growth and expansion into a large part of the western United States.

A difficult, gratifying job
The Utah and California operations of Intermountain Slurry Seal worked closely with the California Department of Transportation (Caltrans) to complete the project in a timely manner and still meet all requirements.

The California area operations managed the project by working with Caltrans, traffic control and pavement-marking subcontractors on scheduling and contractual agreements, while the Utah operations used its equipment and crew to lay the new surface.

The U.S. Route 76 project was located within the Pala and Pauma Indian Reservations, which had three large casinos that also host concerts and other gaming events.

"Route 76 still had its original chip seal surface that was placed about 10 years ago and was starting to show signs of raveling and aging," says Price. "The microsurface improved the quality of the highly traveled road and protected it against further deterioration."

Intermountain Slurry Seal's crew could work only between 9 p.m. and 6 a.m., Sunday night through Friday morning. The job consisted of sweeping off the 15-mile road, fog sealing the shoulders, and removing all of the striping and reflective pavement markers. Then the crew microsurfaced 13-foot-wide paths in each travel lane.

"Microsurfacing is very challenging at night, and honestly there was more traffic on the road at night than during the day," says Price. "We could only control two miles of the road in one lane at a time, so we would often bump up our traffic control to stay within those regulations."

With as many as 1,000 cars on the road at one time during work hours, Intermountain Slurry Seal emphasized safety. Daily safety meetings were held to eliminate danger to both the workers and oncoming traffic. There were no accidents during the job.

Using the right material equipment
Intermountain Slurry Seal finished the project ahead of schedule despite using an aggregate source it had never used before. The Type III aggregate - received from Coachella Valley Aggregate in the Palm Springs, CA, area - was put through extensive testing. In order to be classified as Type III, a specific percentage of the aggregate had to successfully pass through eight different-sized screens.

"We used a 1,000-gram sample of the aggregate and ran it through the screens, weighing it before and after to see if the end product meets specification," says Price. "Type III aggregate is a 'beefier' product than Type II and is the most common aggregate used for highways and other large projects."

Bergkamp's M1 continuous paver has a separate compartment for each of these ingredients. At the flip of a switch, the ingredients are delivered at metered rates into the pugmill, where they are mixed and transferred to a hydraulically adjustable, variable-width spreader box. The augers in the spreader box spread the mix throughout the box and onto the road. Mobile support unit trucks hold replacement ingredients and feed the paving machine when it runs low, keeping the machine running constantly and minimizing the number of construction joints in the road.

In all, Intermountain Slurry Seal used the following to complete the project:

Intermountain Slurry Seal also took extra environmental precautions to prevent the leakage of asphalt or chemicals into the environment - including laying down tarps to absorb excess material during cleaning.

Caltrans was pleased with the new pavement and Intermountain Slurry Seal's attention to the environment.

"I am quite satisfied with the professionalism that the Intermountain crew exhibited," says Todd Traunero, Transportation Engineer for Caltrans District 11. "Their knowledge and attention to detail played an important role in the success of this project."

Second time around
It's no surprise that Intermountain Slurry Seal won ISSA's President's Award for a second straight year. Since 1978, the company has built a reputation for honesty and fairness, and works with its customers to secure their satisfaction. It ensures the quality of its work by testing its materials, making certain its equipment is calibrated properly for each project, and adding the right ingredients into each mix.

The company keeps its equipment fleet up-to-date and invests a great deal of time in operations training and operator safety.

Granite Construction Company helps fund new equipment, training and safety programs for employees. Intermountain Slurry Seal's three operational areas in Utah, Nevada and California work together and cover most of the western United States. Chip seal and microsurfacing make up 65 to 70 percent of the Utah operational area's business, with 25 percent in slurry seal and the rest in fog seal and rejuvenation work.

Intermountain Slurry Seal has been a Bergkamp customer since 1989 and currently uses three M1 pavers, with another on the way, six M2 pavers and eight mobile support units. The Utah operation only uses Bergkamp's M1 continuous paver and M2 Series of truck-mounted pavers for its slurry seal/microsurfacing jobs.

The M1 is the only full-size continuous paver of its kind on the market, and has been used by every contractor receiving ISSA's President's Award - since 2001 when the award was introduced. The M2 Series is ideal for jobs that are smaller or have stockpiled materials close by. It provides contractors the option of putting a drop axle in the front and back of the tandems to maximize the amount of material carried.

"Bergkamp equipment is reliable and easy to maintain, plus they provide excellent support and training," says Price. "They listen, keep an open mind with us, and are very prompt about sending us parts in the rare case that we need them. We still regularly use Bergkamp equipment that is more than 12 years old without any problems."