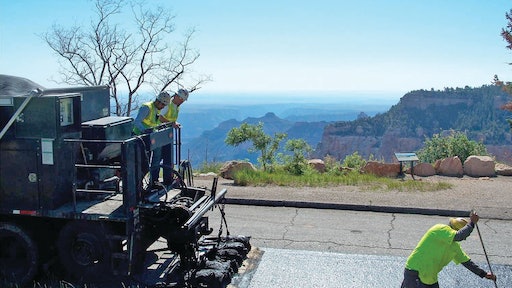 Being more than 8,000 feet above sea level created a shortened season for job completion.

When Intermountain Slurry Seal, a division of Granite Construction Inc., submitted its bid in 2009 to repair more than 430,000 square yards of roads and parking lots along the Grand Canyon’s North Rim, the company knew the job would come with challenges. The magnitude of those challenges, however, wasn’t known until after the bid was accepted.

The significant changes in the job parameters, a heavy snow, forest fires and unique environmental and federal regulations caused Intermountain Slurry Seal to get creative. The flexible nature of pavement preservation processes allowed the company to suggest alternative treatment combinations. It reduced costs, sped up the work and patched more area to meet the original expectations and overall budget, ultimately leading to it receiving the 2011 President’s Award from the International Slurry Surfacing Association (ISSA).

The remote road system leading from Jacob’s Lake, Arizona, to the North Rim Lodge had deteriorated to a point that the Federal Highway Association’s (FHWA) Central Federal Lands (CFL) Highway Division opted to use ARRA (American Recovery and Reinvestment Act) funds to repair them. No one knew exactly how long it had been since the roads and parking areas had received any real maintenance, but long-time staff members at the park estimate that no major work had been done for at least 15 years — and up to 25 years in some places.

The area was 80 to 100 miles away from aggregate sources and viable lodging for contractors. The high altitude (greater than 8,000 feet) created a short season to complete the job. The fact that it was a National Park meant there were unique environmental stipulations. And because it was an ARRA job, there were additional federal stipulations and collateral paperwork involved.

“But, we were excited. We often do the same things day in and day out,” says Nathan Niemann, project manager for Intermountain Slurry Seal. “This wasn’t going to be a terribly profitable job, but it was unique and historic.”

The original Grand Canyon National Park Pavement Preservation-North Rim project outline called primarily for chip sealing on all of the main roadways, micro surfacing for smaller roads and parking lots and some Type 1 and Type 2 flexible patching. Much of the asphalt surface within the park was originally multi-lift chip seal. And with the exception of Route 14 (the main park entrance road) and some patched areas on other routes, chip seal was still the functioning surface.

Intermountain Slurry Seal was scheduled to begin work in April 2010 so it could be completed before the height of the tourist season. What the contractor didn’t know was that between bidding and the start of the project, the parameters for the job had drastically changed. In addition, a heavy-snow year at the North Rim pushed the job’s starting date back by almost a month.

“Because of the heavy snow, the roads weren’t cleared until May 15 for us to get on-site,” notes Niemann. “When we got there, we realized the project owner had added six times the patching quantities over the original bid amounts.” Niemann explains that in addition to the roads being in worse shape overall than anyone anticipated, a forest fire occurred after the bidding closed and further damaged roads to a point that more work was needed over and above the original bid parameters.

“We realized then that the project was going to not only push us into the busiest weeks of the season, but it would also be a challenge to complete before the weather started to cool off. There was going to be a very narrow work window for the chip sealing and micro surfacing,” says Niemann.

A good contractor can roll with changes and make suggestions for better alternatives. Once it was on-site, but before it started the North Rim patching work, Intermountain Slurry Seal recognized that Type 1 and Type 2 patching were in excess of what was needed in many areas to effectively repair the surfaces. Type 1 patching requires removal of 12 inches of material, replacing it with 6 inches of base and two 3-inch lifts of hot mix asphalt (HMA). Type 2 patching removes 6 inches of material and replaces it with two 3-inch lifts of HMA. But at the North Rim, most areas of the existing surface had only 1.5 inches of asphalt.

“It didn’t make sense to put in a 6-inch deep patch,” Niemann says. “So because of the projected overrun of patching, we proposed to do Type 3 patching which would require removal and replacement of only 3 inches.” The Park Service agreed, and patching commenced from June through the end of July. “The additional 2,117 square yards of patching added 20 days to our schedule, which was already behind because of the snow,” adds Niemann.

With the completion of the patching at July’s end, the micro surfacing had to be finished by the end of August, with chip sealing to follow. Niemann explains that had Intermountain Slurry Seal applied the micro surfacing and chip sealing concurrently, it could have expedited the process, but the practice also would have severely impacted tourists’ access to the park during its busiest month. “We chose to run a more linear schedule to reduce the impact on the park and its visitors,” he says.

Micro surfacing was planned for a total of 43 parking- and camping-related surfaces. Scheduling was critical, and Intermountain Slurry Seal posted pre-notification for each area seven days in advance. “On average, it took three days to clear a parking lot, and we had to get creative on occasion,” Niemann says. For instance, up to 20 percent of the park’s visitors did not speak or read English, which caused some confusion.

In addition, backcountry campers often left their cars parked for days at a time, and several did not see notification about the micro surfacing. “On one occasion, we had to send someone on horseback to locate the campers and get their car keys so we could move their vehicle,” Niemann recalls. “But, we did not have to tow a single car."

Adding to the difficulties was the fact that because of trees and obstacles, many camping areas, including 87 campground stalls, could not accommodate equipment. In many of the parking areas, the rock curbing is considered to be a National Historic Landmark. To avoid asphalt emulsion splash or damage in these locations, Intermountain Slurry Seal handled almost 25 percent of the total micro surfacing for the project by hand.

Chip sealing began at the end of August, which also ushered in monsoon season for the park. By this time, morning temperatures were too cool for the chip sealing process, and Niemann says on most days work could not begin until 9:00 or 10:00 a.m.

Although the initial bid indicated 430,000 square yards of chip sealing, Intermountain Slurry Seal worked with the CFL and the Park Service to modify that amount to just over 390,000 square yards. “Because of the extra patching, we reduced the quantity of chip sealing to offset the cost. Cape Royal (Route 13) is 19.5 miles long, but because it was due to have reconstruction done in the next five years, we eliminated the chip sealing on the last seven miles of it,” says Niemann.

Like the other processes preceding it, the chip sealing required modification to the original plans, as well as ongoing good communication with the Park Service. For instance, the project plans for the bid indicated that the roads were 22 to 24 feet wide. All of the scenic drives, however, are only 18 to 20 feet wide—consisting of winding, mountainous roads. Intermountain Slurry Seal requested road closures for safety. Although the Park Service preferred not to close roads, management realized it was the only way to keep the public and Intermountain Slurry Seal’s employees safe.

The road closures added tremendous pressure to keep the schedule, which had to be published a month in advance of the work and only allowed three days to complete each closed road. In addition, the narrow roads required a modified method for chip sealing application. All of the dump trucks ran in a group from the site to the stockyard in order to cover the full width of the road in one pass. Niemann explains this is because there was no way to allow the trucks to pass around the chipper without moving it off the road, which would have been impossible because of the mountainous terrain and environmental requirements stipulated by the Park Service.

“The Park Service also required us to pick up excess chips and take them to our designated disposal site, rather than sweep them to the side, which is typical for chip sealing,” Niemann says. This requirement is stipulated on all National Park jobs because the chip material is typically not native to the area. “But in general, the parks like to use these processes because chip sealing and slurry and micro surfacing are very environmentally friendly,” Niemann adds.

The fact that this project was a FHWA CFL project in conjunction with the National Park Service, funded by ARRA, coupled with its remote, mountainous and historic location, created some additional challenges:

Niemann says the care taken to meet every challenge paid off in several ways. When the project was complete and all of the paperwork finalized, a federal ARRA audit rated the job at an A-. “For all that we had to work with — the stipulations, additional work, weather and visitors — it went very well,” he says. “We all had our preferences as to what we wanted done and how we wanted it done, but everyone was willing to work together and find the best solutions. And, the different pavement preservation processes available allowed us to be flexible.”

Ultimately, Niemann says, “With everything we went through, to receive the grade we did from the ARRA audit, and to be recognized by ISSA with the President’s Award for 2011 — it was really rewarding. We were never notified of any complaints and when we were finished and visitors pulled in, the park had something to be proud of.”

*Based on quality control tests during chip sealing production.