Winter-Damaged Streets Get Milled, Repaved in the City of Southfield

Allied Construction tackles the job with its new milling machine 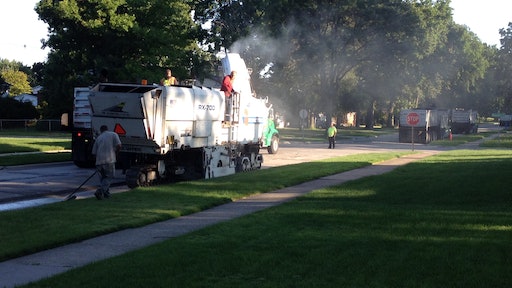 Allied Construction was already under contract for extensive asphalt patching when the scope was expanded to mill and resurface numerous asphalt and concrete roads throughout the city.

Pull the record book off the shelf for a moment and look up "10 Major Cities With the Worst Winter of 2013-14."

Toledo, Chicago and Detroit are the top three. For Metro Detroit the winter of 2013-14 was the second snowiest season on record — bested only by the winter of 1880-1881 … which was only a handful or so years before Henry Ford built his first automobile. And thanks to a meteorological phenomenon known as the Polar Vortex, temperatures plunged regularly below zero degrees F in Detroit, making rare days above freezing cause to consider breaking out t-shirts, shorts and sunscreen. But wait a second, skip the sunscreen. Only two days from Dec. 1-March 18 were classified as "sunny," meaning days with 30% or less cloud cover.

After emerging from this miserable winter, city officials with Southfield, MI, a Detroit suburb, assessed the sorry state of their winter besieged streets. They were in bad shape. The asphalt and concrete streets throughout the city had taken a beating.

It became clear that the city’s original plans to patch and fill wouldn’t be enough. Allied Construction, based in Clarkston, MI was already under contract for extensive asphalt patching in the city, but the scope was expanded to mill and resurface numerous asphalt and concrete roads throughout the city.

All in a day's work

"We received a list of project streets at the beginning of the month with the mandate of keep traffic flowing and don’t spend more than a day or two at each location,” says Andrew Foster, EIT, resident engineer with Allied Construction. “Our goal has been to mill the roads out, perform the repairs, and pave them back in the same day.”

The city of Southfield, its residents and businesses, and Allied Construction all agreed: Get the broken roads fixed ASAP.

"Smooth roads are not only a quality-of-life issue, but after an extreme winter there’s a sense of 'get ‘er done' so we can be normal again,’” Foster says. “Our crew of nine, plus our truck drivers all understood the urgency.”

As Allied completed the first projects on budget and within the 15-day completion windows provided, the City of Southfield extended the contract and added new sites to the repair/reconstruction list.

With winter here again, Allied has completed its work. The company has worked on an approximate total of 60-plus major patches and 10 street location sites. The majority of the roads are residential streets, although there are a number of collector roads as well. The streets are 22-feet to 26-feet wide and the project sites can vary from several blocks to almost a mile in length.

"A lot of the streets are concrete roads, so we were milling them down two to three inches to remove much of the spalled and damaged concrete,” Foster says. “We performed joint repairs and replaced a few slabs. We resurfaced the roads with 3 inches of new asphalt.”

"We used our new Roadtec RP-195e rubber-track paver for all the road paving,” said Foster. “It’s a heavy-duty highway machine, but it’s amazingly nimble on these city streets. We’ve even paved driveways with it.”

The new paver was acquired after a visit to Roadtec’s Chattanooga, TN headquarters and manufacturing facility.

“We were very impressed seeing first hand the build quality of the machine and how quiet the engine is,” Foster stated.  “John Foster, the owner of Allied Construction, especially liked how quiet it was since he lost some of his hearing when operating an old Detroit diesel-engine screamer on a paver in the early 1980s.”

The 10-foot class machine was equipped with a Carlson ER-R2-10 rear mount screed. A feature of the screed that Foster especially liked is the design of the heating elements, which are in direct contact with the upper surface of the main screed plate, and are designed to deliver even, controllable heat. Additionally, with the thicker mats Allied has been placing on the Southfield streets, the Carlson screed, with vibration turned up, has helped achieve the density requirements

"This paver/screed combo lays a beautiful mat with excellent ride quality,” Foster states.  “While there is no IRI spec for smoothness on this project, the city engineers have kept a close eye on the paved finish and have been very happy with the results of the new paver.”

Foster admitted that he was cautious at first about buying a machine directly from the manufacturer without local dealer support, but that concern got tossed quickly.

"The machine has been a solid performer as well as the service department at Roadtec," he says. "I can’t say enough about the Guardian Telematics System, which came standard on the machine.  We had a pump on the paver go down. When we called the service department, they bought up the machine on their computers and diagnosed the problem within minutes. They told us to re-route two hoses as a temporary fix and we were paving again within 15 minutes. Meanwhile, Roadtec overnight delivered the new pump to us and had it installed the next day. If we were dependent on a local dealer for support, we would have easily lost a half day to a day or longer of production, while waiting for a service tech to come, diagnose, and fix the problem. We’ve been really impressed with the Guardian System and the Roadtec service team.”

The RP-195e paver has become the day-to-day paver for Allied Construction’s Clarkston crew. The machine has been used on MDOT, county, commercial, and even residential projects before the Southfield project began. "We have used this machine on 2,500-ton days, as well as 250-ton days, and it has performed well at whatever task we’ve put in front of it,” Foster says.

For the City of Southfield street repair/rehab project, Allied Construction placed approximately 10,000 cubic tons of HMA — using everything from traditional Marshall Mixes to Low Volume Superpave (LVSP) depending on the road traffic.

"With these types of projects, safety for the community and our employees is always preeminent," says Foster. "The project has gone very smoothly due to careful planning and cooperation of all involved. It was great to be running a new paver and to have Roadtec service support behind us was a worry lifted and a key to the project going as smoothly as it did."