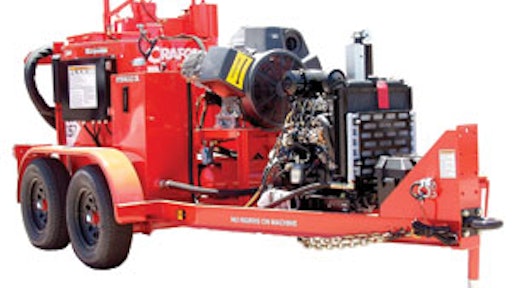 The benefits of cracksealing are beginning to spread, just as quickly as the cracks in an unkempt 7-year-old parking lot. According to Mark Manning, vice president of Crafco, cracksealing and crackfilling is finally getting the attention and respect it deserves from the pavement maintenance world.

"State agencies, cities, counties, and consulting engineers have accepted the procedure of crack and joint sealing much, much more than five years ago," he says. "They accept it as a first line of defense in the pavement preservation battle."

Just as attitudes toward cracksealing have changed, so has the equipment used to apply it. Although manufacturers have changed little in the basic design of oil-jacketed and direct-fire machines in recent years, they have added and improved a host of features to increase efficiency, ease of use, and safety.

Safety and operator comfort is a driving force in cracksealing equipment. Manufacturers have designed their machines with a range of ergonomic features, such as a loading door designed so that a worker of average height never has to lift blocks of sealer above chest high, a door that has a splash guard to keep hot sealant from splashing on a worker while loading blocks of sealant into the tank, and wands designed to prevent hot sealant from leaking out if dropped or bumped. Many of these features are developed through ideas from a wide range of sources.

"We continually solicit feedback from our customers on the performance of our equipment from an ergonomic perspective as well as productivity, reliability, serviceability, and safety," says Vic Ujihara of Marathon Equipment Inc.

Cimline has taken several steps to make the cracksealing experience as safe and easy on operators as possible. They offer LED taillights, strobe lights, and LED flashing arrow boards for customers to choose from to help make their units stand out on the road and avoid traffic accidents. Cimline has also enclosed and insulated the diesel engine on its machines to make the equipment quieter for workers to be around and for others in the area. In addition, Cimline put an afterburner on its kettles to keep smoke from leaking out where people could smell or breathe it.

"So if you open a Cimline kettle, typically you can look and see the sealants, whereas most of the other products that are out there, if you opened up the kettle and looked in through the loading door you wouldn't be able to see the sealants because of the steam and smoke coming off the sealant," says Brad Dunn, vice president of sales at Cimline.

Heated hoses are widespread over the cracksealing industry. In the past when a wand wasn't being used, an operator would need to recirculate the sealant through the hose and back into the tank in order to keep the sealant from cooling off and clogging the hose. To avoid this, manufacturers developed heated hoses several years ago.

"What a heated hose allows the operator is flexibility during repositioning of a kettle, from one part of a roadway to another or during turning," Dunn says. "Without a heated hose on a cool day, when temperatures could be in the 40s or 30s, the sealant could freeze up in the hose, and so to keep that from happening, you'd have to go back to the machine to keep it moving so the material won't clog up in the hose."

Marathon Equipment has used oil-jacketed hoses in its product line for over 15 years. Using a patented, low-pressure oil heating system, a cold hose can heat material to application temperature in several minutes.

"Contrary to common belief, hot oil only circulates through the hose for initial startup and then oil flow is discontinued," Marathon's Ujihara explains. "Our hose support system provides the operator with a durable sealant applicator wand, requiring only a few pounds of force to lift. Our exclusive swivel shoe applicator also allows the operator to rest the tip of the wand on the asphalt surface to further reduce fatigue. Productivity is also improved, as application of sealant with the swivel shoe will not require leveling with a squeegee."

"Being on the end of the hose all day is tough work — it could be warm, noisy, it's dangerous in the traffic anyway. So we try to make the hoses and wands as light as possible," Dunn says. "We've gone to an aluminum wand, and Cimline has one of the lightest electrically heated hoses on the market, and that's for operator comfort."

An additional safety feature found on Cimline and Crafco hoses locks the wand into the port when it is recirculating material back into the tank. The wand cannot be removed, and therefore hot sealant material cannot escape from the tip, unless the safety pin is removed, which stops the recirculation. Heated hoses can tell when this recirculation is happening, and the heating mechanism slows down, saving energy.

Crafco's internal pump technology on its SuperShot melters eliminates the need for hose recirculation. The pump works only on demand, after the operator activates a switch on the wand. This pump system leads to a longer pump life and results in no pressure hoses.

"They are primarily safety related and wear parts related. When a pump's not turning, it's not wearing itself out, so it only turns on demand," Manning says. "You push the switch, the pump pumps the sealant. You turn it off, the pump stops and the sealant stops flowing, as opposed to a recirculating system where it continually pumps and all it does is redirect the sealant when you turn the handle on for the wand to apply product."

More and more manufacturers are designing simplicity into their machines, and adding electronic controls is one way they're doing this.

"Early on, a lot of the kettles had no controls, and then controls were analog, sort of like turning a dial on a toaster to warmer or cooler," Dunn says. "Today, because of technology available, a lot of units have the ability to digitally measure the heat transfer oil, the material, and report that back on a digital display that tells you exactly what the temperatures are. This is nice because if you're doing state work, you can actually adjust your machine so that if an inspector used a heat gun he could actually see the material go into the crack at exactly, say 390 degrees, or exactly what the specifications called for."

These electronic controls monitor more than materials. Manning explains Crafco's SuperShot units have an engine monitoring system which operates through an onboard computer — all the operator has to do is flip switches. The control panel displays material, hot oil, and hose temperatures, and also controls the pump, agitator, heat, hose, and engine controls.

The systems also track engine function, such as oil pressure and radiator coolant, and if there is any problem with an engine, the system shuts down.

"The biggest investment on the machine is the engine — those diesels are very expensive, but they tend to last a long time. So what this does is if there's any problem it shuts the engine down," Dunn says. "People like that, because it makes sure that if you don't have oil or something like that, you fix the problem before you wreck the engine."

How to Select Crack Routing Equipment

Selecting the right router can increase productivity and save you time and money
Jessica Lombardo
June 5, 2017

How to determine when crack routing is appropriate and then complete the best rout possible
Jessica Lombardo
June 5, 2017

TruFlex is a highly rubberized crack sealant designed for sealing cracks in asphalt or concrete pavements. TruFlex can also be mixed with sand for filling larger cracks and alligatored areas.
SealMaster
April 24, 2017

Crack Sealing as a Sustainable Solution

NCAT study shows that crack sealing as a pre-treatment before a preservation application can prevent cracking
Jessica Lombardo
April 4, 2017