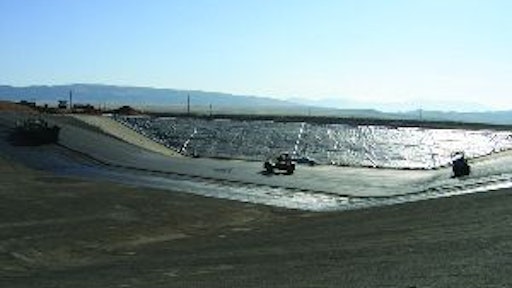 The reason is simple: As hot mix asphalt cools it becomes less pliable, making compaction more difficult. From the time it takes a paver to start a paving pass, complete the pass, and then return to begin a new adjacent pass, the mat is cooling. And even though the roller is working closely behind the paver, by the time the paver begins its pass up against the previous edge, that edge has cooled. And when an edge is exposed for even longer times, it becomes difficult to achieve proper density.

According to the Asphalt Institute’s The Asphalt Handbook, compaction density needs to be at least 92 percent to be effective, and contracts often specify a minimum density that must be attained. Contractors following standard hot mix placement and compaction procedures can meet that requirement. But if acceptable density is not achieved, the joint because a fault in the pavement, an entryway for water to work its way into the base and subbase, the first step in pavement deterioration.

So what can a contractor do when faced with a job where the density requirements are not only greater, but the penalty for not achieving those density goals is potentially very damaging? Such was the case with the job Skanska took on paving the reservoir at Tehachapi East Afterbay, near Gorman, CA.

Given that the project was a 71-acre reservoir, designed to hold water from the California Aquaduct, California’s Department of Water resources placed significant emphasis on achieving density - not only of the 6-inch mat but of all the joints in the 100,000-ton job. Specifically, if joints weren’t compacted to the required density the reservoir would leak, so Skanska had little margin for error. The state’s specification allowed no deviation from its density specifications.

“Usually the contract includes some type of monetary bonus for achieving the required density or a monetary penalty if we don’t. And typically we get the bonus,” Carricaburu says.

The difference on this job was that if Skanska didn’t achieve the specified density the contractor would have to remove the affected pavement and repave it. “That would have been extremely expensive and time consuming, so we really needed to hit the spec numbers.”

In this case the specified numbers were pretty high: 97 percent for the mat itself and 98 percent for density on the longitudinal joints. But because it knew the numbers were a stretch, the state of California in its specifications required use of an infrared joint heater, a relatively new piece of equipment that Skanska had never used.

“The state learned over the years that contractors simply couldn’t attain this level of density without a joint heater,” Carricaburu says. “So the infrared joint heater was in the job specs.”

Setting up the job

The Tehachapi East job wasn’t difficult only because of the level of density that needed to be reached; it was difficult because it had to be paved on a slope, making it essentially paving a bowl. Carricaburu says the steep slope of the job made it impossible for standard truck-and-paver operations and also made use of a material transfer vehicle ineffective.

So Skanska constructed ramps from the top of the reservoir to the bottom so trucks hauling mix could get into and out of the bowl. A steel box was placed in the bottom of the bowl to hold hot mix, keeping it clean and off the ground. Trucks from the plant drove into the bowl, backed into the box and dumped their loads. Then loaders drove into the box and retrieved a load of material, dumping that load into the paver hopper. Skanska installed a hopper insert in the paver to prevent the hot mix from falling out once the paver took to the slope.

Once the paver had a full hopper of mix, the operator drove it from the bottom of the reservoir up the slope, then placed the mat working back toward the reservoir bottom. Carricaburu says each 12-ft.-wide pass placed roughly 125 tons of the 6-inch mat, and the crew was able to place 2,000 tons a day, completing the job in 50 days.

But once Skanska figured out the paving process, that part of the job went pretty smoothly. The challenge, Carricaburu says, was getting the required density at the joints, especially cold joints.

This was also the first time Skanska had used a joint heater. He says Skanska used the joint heater, manufactured by Ray-Tech Inc., in two ways: two reheat the previous day’s joint before the first pass of the new day and to keep the current joint warm enough for the next pass to ease compaction.

Before this job Skanska approached joints the same way most contractors approach them. Skanska crews saw cut back to a vertical edge where they knew they had adequate density in the mat. Material that didn’t meet the density requirements was removed, tack was applied to the vertical saw-cut edge, and the next pass was begun with a slight overlap onto the cold mat.

“That was a costly and time-consuming process,” Carricaburu says.

But using Ray-Tech Infrared Corp.’s Joint Heating System Skanska was able to raise the temperature of the cold joint from the air temperature, (50°F-60°F) to roughly 275°F.

Operating much like a standard infrared machine, the propane-powered infrared joint heater is long and narrow, measuring 13’ 6” long x 21” wide. It’s heating area measures 15” wide and 144” long and contains four 36-inch-long infrared energy converters. A three-way switch controls the heat, including a manual override that enables the unit to remain on until turned off. An automatic setting keeps the heater on as long as the temperature of the asphalt is less than a specified temperature (set at 350°F).

“The goal was to get the temperature of the joint to 275°F (with placed mix temperature 300°F) to make it easier for compaction density to be achieved,” Carricaburu says.

Tom Allen, general manager at Ray-Tech, says the joint heater use at the Tehachapi project was limited by the terrain constraints inherent in the site. He says that on a typical job using the joint heater, such as a recent job by Heartland Asphalt at Mason City Airport in Iowa, five pre-heaters plus a paver-mounted heater would be used.

But because Skanska was paving in a bowl they were able to use only two pre-heaters, pulled by loaders, plus the paver-mounted infrared heater, which was mounted to the left-hand side of the paver, the side matched to the previous day’s joint.

Carricaburu says the first pass of each day, against the cold joint, took the longest with the paver slowing down to half speed. Allen says typical paving rates using the five pre-heaters would be 40 to 45 feet per minute on a 3-inch lift.

“Slowing the paver down for the cold joints was only necessary because we could only utilize two pre-heaters,” Allen says. “If pavers want complete results - elimination of the joint and full density - the cold unconfined joint must be heated to full depth and in from the edge 6 inches.”

Allen adds that additional asphalt, generally 3/8 inch, must be overlaid onto the joint by extending the shoe over the joint by about 4 inches. This replaces the reduction of material caused by the rollers squeezing out the unconfined edge.

“The result of heating and this additional material eliminate the joint altogether and will establish predictable density without impacting the normal paving operation,” Allen says.

Another factor in achieving compaction density was the wedge joint constructed by the paver. Carricaburu says that infrared works best on flat surfaces, so Skanska constructed a wedge joint as opposed to the vertical joint face standard in most paving operations.

“At end of screed (on the right) there’s the open edge and there’s a wedge that fits in the screed so the joint created is not a vertical joint but an angled joint instead,” he says. “By creating that wedge the infrared was able to heat the mix better at the joint, which was one of the factors that helped us achieve density.”

By raising the temperature of the cold joint closer to the temperature of the new mix, Skanska significantly improved its chances of reaching the 98% density the specifications required. A Caterpillar 634 vibratory steel-wheel roller followed immediately behind the paver, as close as possible but a safe distance behind because of the slope of the job.

“It was a tough job, no question about it, and a lot of people weren’t willing to take it on,” Carricaburu says. “But that’s the kind of work we take on and though the project was completed in 2006 we’ve had no leaks and no problems so far.”

While these repair tools are considered safer than cut and replace methods, there are still precautions you and your crew should take when working with this equipment.
March 1, 2016