Infrared equipment has become an essential part of a pavement maintenance crew. 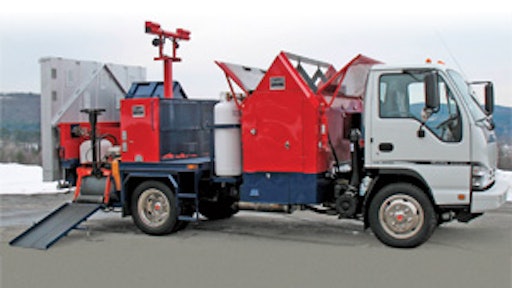 The direction of manufacturing in the infrared equipment industry depends, it seems, on which manufacturer is doing the analysis. That's a good thing for contractors as they can find a piece of equipment to match just about any need they have.

But even bigger than the variety of equipment available is the acceptance of the infrared process.

"Infrared has been around since 1962 and even in 1996 I rarely talked with people familiar with the process," says Al Knipfing of Kasi Infrared. "I spent my time selling them on the process, not the equipment. Now people want a complete system and people call all the time asking about equipment. It's just night and day from 10 years ago."

David Strassman, president of Asphalt Reheat Systems, adds that every asphalt contractor in the United States ought to have a heater.

"Infrared equipment has become an essential part of a pavement maintenance crew, and portability of the heater is the single biggest improvement over the recent years," Strassman says. "Anybody with a pickup truck can and should have some old asphalt, a lute, a plate compactor and an infrared unit."

The increased acceptance of infrared combined with the huge variety of uses has resulted in a variety of equipment to choose from. While some manufacturers have focused their efforts on larger, truck- or trailer-mounted, all-inclusive machines designed to serve a contractors every need, other manufacturers emphasize smaller units. And some manufacturers focus on specialty infrared units, such as equipment designed specifically to heat cold joints in asphalt paving or to heat surfaces and tape for thermoplastic applications. But regardless of which view suits your business, you can find the equipment to add infrared repair to your fleet.

Knipfing says the infrared market has become more sophisticated, and the equipment Kasi manufactures is designed with that in mind.

He says contractors realize that in order to be in the infrared business they have to have three systems with them all the time: the pavement heater, a hot box or reclaimer, and some sort of compaction unit.

"If you try to put this together on a piecemeal basis your production just drops tremendously and if you don't have a hot box or reclaimer you just can't be as productive using a truck full of mix," Knipfing says.

So Kasi's responded with The Patriot model, just introduced at National Pavement Expo in Charlotte. The Patriot features hydraulic operation and a more sophisticated blower system, all mounted on a smaller Isuzu chassis. Mounting on the smaller chassis provides the benefits of a truck-mounted system where you don't have to worry about a trailer but also the advantages of a smaller, more maneuverable vehicle.

"A big consideration we had in developing this machine was customer convenience," Knipfing says. "So we added hydraulics and that eliminated a lot of the mechanical systems. That makes for a safer machine because you don't have to worry about cables, winches, and hooks."

Another modification in The Patriot is for the compaction units. Knipfing says that contractors have indicated they like the convenience of storing the roller on the unit itself. On most units that means using a cable and winch to lift the roller up to 48 inches off the off the ground.

"Instead we lowered the compartment that holds the roller to 15 inches off the ground," Knipfing says. "And instead of relying on a winch to pick it up and put it down we have a ramp that unfolds from the storage compartment. It's simpler and safer."

The Patriot also features a new Ultimate Air blower system that runs at 24 volts and has an anticipated life of 20,000 hours of operation.

"The blower motors take the gas and air, mix it, and propel it into the heating chamber and through the infrared converters," Knipfing says. "In the past there's always been a maintenance issue because the brushes on the blower system wear out and need replacement. The Ultimate Air blowers use completely different technology with blower motor and controls all in one. It's a brushless system that eliminates all maintenance issues in the unit."

He says they have also relocated the propane tanks, which also should help contractors work during cold weather.

"One potential problem with propane tanks is they can freeze up," Knipfing says. Since the reclaimer box is warm to the touch, giving off a little residual heat, we decided to place the propane tanks against it to prevent them from frosting."

Another manufacturer, Thermotrack, distinguishes itself in the market partly through its "reciprocating" heating element, which Greg Larsen, president, markets as the "next generation heating." The system relies on an electric-powered, belt-driven, non-stationary infrared heating element that travels back and forth on a rounded rail. Instead of ceramics, the heating elements are constructed of a tight stainless steel mesh screen.

Larsen says the unit is portable and folds up for easy transport. The 9-ft.-wide heating element can travel 6.5 feet, meaning the unit can heat an 58.5-sq.-ft. area. Larsen says the heating area also can be "controlled and downsized" for smaller jobs.

Larsen adds contractors can see the pavement as it's heating, which can be an advantage in certain situations.

"Our goal is simpler, smaller, and more efficient," Strassman says. "Our new heaters are smaller, they weigh less, they have fewer parts, and they heat better."

Strassman says Asphalt Reheat Systems' infrared units use half the fuel and heat twice as fast as some units on the market, partly because they are smaller. He says new models, introduced at NPE, are 30% smaller, weigh 30% less (between 90 and 100 pounds) and run their electrical systems off solar panels.

"The heating chambers on the units are made in different sizes and different configurations," Van Velsor says. "You can heat them narrow for trenching, for example, and wider for other kinds of repairs."

Asphalt Reheat Systems builds its machines in a unitized system. Strassman says the biggest ARS seller is a 4 foot x 4 foot machine, but adds that all machines have hinges so they can be connected to heat larger areas. He says their 4 foot x 6 foot machine can be heated in a 2 foot x 6 foot configuration when needed, allowing the contractor to save time and fuel.

"And you don't have to heat areas of the pavement that don't require it. Stamped asphalt is a good example," he says. "If you're doing a 12-inch border you don't want to take a 4 x 4 unit out there and light the whole thing to get the 12-inch border heated. But you can take a 2 x 6 unit to solve that problem."

He says it's even easier to heat specific zones than it was before.

"You used to have to turn a gas valve off or put blockers on underneath to restrict the heat to an area," Strassman says.

"Now it's easy to heat a specific area. Now you only have to heat the area that needs to be heated."

Strassman says that because all contractors are "mistake fixers" every contractor has a use for an infrared machine.

"Just about every job you go on requires some repair of some type and either you have to do it yourself and get on with the job or you have to hire someone to do it for you," Strassman says.

"When you hire someone you are not only at their mercy as far as scheduling, but you don't have the same control over the job quality that you have when you do work yourself. Owning an infrared machine enables you to subcontract less, control more, and generate additional revenue at the same time. Don't think of it as an asphalt heater anymore, just think of it as a heater and all of a sudden that opens the doors to a huge variety of things that can be done with it." 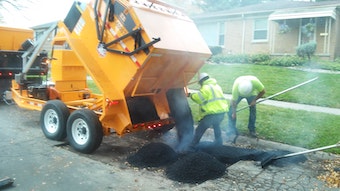 The new line of JLG Rough Terrain Scissors has an answer for every task. When we say upgrade, we mean business – yours.
June 3, 2021
Pavement Marking & Striping