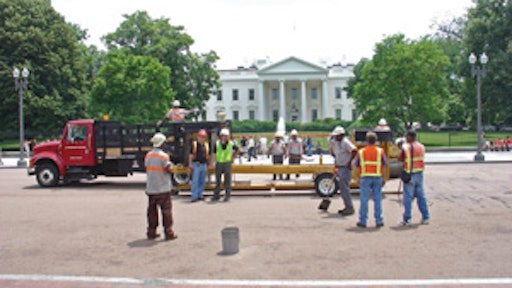 The versatility of infrared repair equipment was a job-saving factor in a recent job at one of the most famous locations in the United States: 1600 Pennsylvania Avenue, right in front of the White House.

Bob Kieswetter, president of Heat Design Equipment, whose infrared unit was used on the project, says a specially designed clear binder and specially selected two-color aggregate was used in August 2005 to give the streets in front of the White House an authentic, old-world appearance. He says the special paving job, by Aggregate Industries as a subcontractor to GC Lane Construction, under contract to the Federal Highway Administration, was designed to result in a pavement that looked like an old gravel road. The six-lane-wide street, extending three blocks, is closed to traffic in front of the White House. It was paved in August, but the clear binder, which is stickier than traditional black hot mix asphalt binder, created some difficulties as the paving mat cooled.

"A lot of the design was for good appearance, and the nature of the material being very sticky it was crucial to get a hot joint," Kieswetter says.

So Aggregate Industries developed a plan that worked well.

"Most joints were fine as they were constructed using the echelon paving approach, two pavers operating simultaneously side by side so the joint was always hot," Kieswetter says. "The paving temperatures were fine and the air temperatures were fine, but because of the difficulties of using the stickier binder they ended up with two joints that were raveling pretty quickly, and there was a bit of segregation at the two joints as well."

Kieswetter says Aggregate Industries was asked to repair two 500-foot-long joints, but because of the specially designed binder and mix, the contractor was uncertain how best to make the repairs on the sensitive mix.

"Typically this joint heater is used immediately in front of the paver, about 4 inches off the ground with heat pressure built up to heat a cold joint while a new lane of hot mix asphalt is placed and then compacted," Kieswetter says.

But they thought this might be the solution they needed.

"Because of the delicate nature of the pavement we tested the process at the same test site in Rock Creek Park, MD, where they had tested the original mix," Kieswetter says. "We fixed up some joints and developed a protocol for reheating and recompacting the joint."

"You have to protect conventional asphalt from overheating but we had to protect this special mix even more," Kieswetter says. "We learned from the test site that if we left the heat on too long the binder turned black and the joints would be easily visible. So we had to test out how best to heat it so we could add some mix and recompact it without turning it a darker color."

Aggregate Industries tried various temperatures, various rates of moving the heater along the joint, and various heights of the infrared unit above the pavement. Through trial and error on the testing area they determined they needed to make several changes from standard infrared repair or joint heating procedure:

"Typically the joint heater is used for longitudinal joints in front of a paver," Kieswetter says. "It goes fast, as past as the paver moves, and it is closer to the pavement and operates at a higher pressure for more heat."

Following testing Aggregate Industries reduced the heat pressure to one-third of what is typically used, raised the unit 10 inches off the pavement instead of the standard 4 inches, and reheated at a rate of 4 feet per minute, as opposed to the conventional rate of 50 feet per minute ahead of a paver.

"The idea was to get the top 1/2 inch warm so we could add the new material and recompact," Kieswetter says. "Though the heat was less intense at the surface, the increased exposure of the surface to the heat provided just the right softening they needed."

Aggregate Industries had some material it has stockpiled for utility cuts in the future and they tested the joint repair process using that and realized that while they could rework some the heated joint and the added material a little, luting and raking was difficult as the sticky binder cooled quickly, and reworking quickly caused additional segregation.

Their solution was to use the hot box recycler to heat some of the stockpiled product. Once heated Aggregate Industries removed the coarse aggregate, added additional binder, and remixed it. Over two days Aggregate Industries reheated the fines-heavy mix, reheated the joint, added the new material, then compacted the joints using an Ingersoll Rand DD 24 dual drum vibratory roller.

"Aggregate Industries did all the work, and they really did a nice job from beginning to end and ended up with a very satisfying appearance," Kieswetter says. "The moral is: Always preheat longitudinal joints so you always have a hot joint to pave against."