A Lesson in Pothole Repair Economics 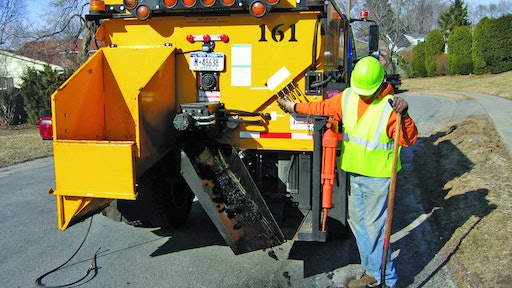 The Town of Irondequoit, NY, recently overcame its significant pothole repair challenges by changing its patching methods. This beautiful suburb north of Rochester, NY, borders Lake Ontario, the Genesee River and Irondequoit Bay. With all of this water, natural precipitation and a fluctuating climate, town officials focus significant energy protecting its motorists and their vehicles from pothole damages.

Jeff Graves, labor foreman for Irondequoit and a 28-year veteran in its Department of Public Works, oversees most of the town’s road patching and cleanup work. Graves and his crews focus first on safety issues, and then on citizen requests and overall road conditions to prioritize which potholes need repair.

Previous Methods Didn’t Quite Cut It

Established in 1839, Irondequoit has a mixture of high- to low-volume roads that see anywhere from a few to thousands of vehicles per day. Originally, the town used a cold-patch material or hot-mix asphalt for what is commonly referred to as the “throw and roll” method. The end result was short-term pothole repairs and occasionally wasted time and material.

In the mid 1990s, the town purchased a propane-operated and oil-heated pothole patcher. Initially, the result was favorable because the unit provided a longer lasting, more pliable product. The biggest obstacles were that the hopper was not insulated and the propane could not be used to heat the asphalt while the truck was in motion. When traveling from site to site, the material would cool down and become less pliable. At times, Irondequoit was disposing of inadequate asphalt material and often producing less than acceptable patch longevity.

As a replacement, the town recently purchased Bergkamp’s all-in-one FP5 Flameless Pothole Patcher. The biggest advantage of the new unit is the electric-heated hopper that keeps the asphalt material warm while the unit is in motion or stopped. It uses an onboard hydraulic-powered AC generator to heat its insulated 5.1 cubic-yard hopper, and keeps the material at a consistent temperature throughout the day. In addition, Graves and his crew use the tools located at the back of the unit to perform a more permanent pothole repair process:

“With other methods, we would often revisit previously patched areas,” said Graves.

“With the flameless pothole patcher, we can patch roads with high traffic volumes without worrying about them for a long time.”

Graves estimates he is saving up to 10 man hours some weeks producing new patches instead of performing repetitive repairs. The town has also lowered material costs. With the propane-operated pothole patcher, the town was unable to use approximately 10 percent of the hot asphalt material purchased per week. At an average of $67 per ton last year, the town saved approximately $200 per week. In addition, by making fewer trips to the asphalt plant, the town saves on diesel fuel costs, wear and tear on the equipment and has increased on-the-job productivity.

“The flameless pothole patcher definitely provides a good return on our investment,” said Graves. “We use nearly 100 percent of the material purchased and buy less. We’re even using this unit for other road repairs and larger patching work, including trenches and sidewalk repairs.”

Temperature Is No Obstacle

The weather gets very cold during Irondequoit’s winters, where single digits can become the norm.

“We can go out nearly every day with this unit,” said Graves. “To test it out, I picked a nine-degree day with a stiff wind chill and parked it outside. After 90 minutes, the flameless pothole patcher kept the material at the proper temperature. The pothole repairs are holding up very well with the thawing and freezing temperatures.”

Feedback from the residents regarding the new pothole patcher has been limited. So far, Graves said that he isn’t getting near the number of complaints as in the past.

“The residents are happy because the smaller potholes aren’t turning into larger ones anymore,” said Graves. “Before, we consistently repatched potholes and at times had trouble providing an acceptable road surface. Now, we can address the potholes when they are just an annoyance before they turn into a dangerous condition. The electric-heated unit has been a welcomed addition to our fleet by both our workers and the town’s residents.”

Your customers hate them. You need to know how to get rid of them and fast.
Jessica Lombardo
June 12, 2017
Skid Steers

Top 10 Hot Machines to Look For at CONEXPO

This new equipment has drawn the most attention on ForConstructionPros.com since January 1
April 7, 2017