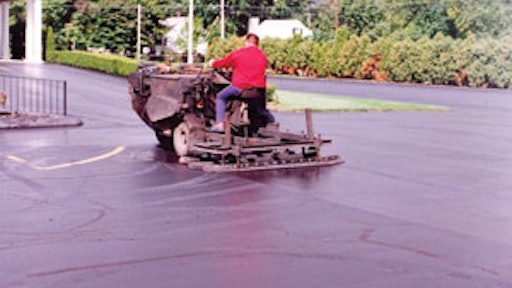 The pavement community has strict specifications for the design and manufacturing of asphalt mixtures. But like any other process, a strict adherence to the rules costs more money. As a result most local pavements and especially parking lot pavements might not receive the highest quality asphalt mixtures. It is very common that a parking lot is constructed with materials that failed to meet the specifications of a highway project.

Whatever the circumstances that occurred during the construction process, eventually it will be the responsibility of the owner, with the help of a contractor, to keep the pavement looking good and providing its intended service. With a little education on pavement performance, most owners and contractors will be able to make smart decisions. Following are a few simple facts to keep in mind:

The Pavement Coating Technology Center (PCTC) is a group of manufacturers and suppliers of pavement sealers that are highly dedicated to the betterment of the entire industry. The PCTC was initiated 10 years ago with the objective of conducting research and development to improve the state of knowledge on pavement maintenance. PCTC's efforts have led to significant progress on several issues confronting the pavement sealer community, ranging from the design of sealers to the environmental concerns of the public.

Sand in the mix design

In general coal tar based sealers are made of the coal tar binder, sand, water, and additive. The overall success of the sealer depends very heavily on the proportioning of its various components. The first thing to recognize is that there is no such thing as one formula fits all. Each sealer should be designed individually to take into consideration the unique characteristics of the coal tar binder and sand that significantly influence the performance of the final product (i.e. the sealer). The PCTC developed guide specifications for the design of coal tar sealers: PCTC01 for un-modified sealers and PCTC02 for polymer-modified sealers. The guides are available at no charge through the PCTC web page "www.Pavtec.com".

Based on this study, the PCTC strongly recommends that the sealer be designed to account for the unique characteristics of the coal tar binder and the sand that are being used on the job and sealer designs with high sand loadings should not be accepted.

When to seal new pavement

Asphalt mixtures are highly sensitive to age and temperature. They are flexible when they are young and they gain strength and lose flexibility as they age. This gain in strength is necessary to help resist permanent deformation while the loss of flexibility would increase the potential for cracking. Sealing the surface of an asphalt pavement is highly effective in slowing the aging process and protecting the pavement from cracking. However, the critical question becomes; when to seal the pavement? Should the pavement be sealed immediately after construction or should there be a waiting period before the pavement is sealed? Data generated from a PCTC study provided solid information toward the knowledge of when to seal the pavement. In the mid 1990s, the PCTC sealed a parking lot in Reno, NV, within 30 days after construction. Several types of sealers were used side-by-side. One year later the majority of the sealers started showing cracks and two years later the majority of the sections were totally cracked. In 2001, the PCTC sealed another pavement in Reno one year after construction. Again, several types of sealers were used side-by-side. Three years later none of the sealcoat sections have shown any cracking. This data indicates that sealing a brand new pavement would jeopardize the success of the sealcoat while sealing a one-year-old pavement would lead to a successful sealcoat.

In summary, the data indicates that while it is necessary to provide a one-year curing period for asphalt pavements, the degree of success of the sealer is also greatly improved if it is applied after one year from construction. Therefore, the field data support the earlier PCTC recommendation of: "under normal traffic and environmental conditions, a new pavement be sealed after either: a) 90 to 180 days of +70° F weather, or b) one year of normal weather conditions.

"Dedicated to the advancement of the sealcoating industry," the Asphalt Sealcoat Manufacturers Association (ASMA) is made up of suppliers to and producers of asphalt emulsion-based sealcoating material. An ASMA "Standard Specification" developed to guide the industry calls for:

How to Know When Your Sealcoat is Dried and Cured