Assigning excessive wear or damage to the jobs that cause it gives Traylor Bros. an accurate accounting of the cost to work in extreme environments, so bids are more accurate 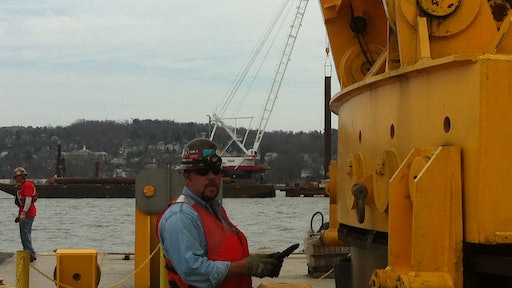 Chris Chartrey, a Traylor Bros. equipment superintendent, uses an iPad form to inspect a crane on the Tappan Zee bridge job on the Hudson River. Inspecting equipment as it leaves and arrives on sites helps Traylor assign excessive wear directly to the work that causes it, so future bids can accommodate the cost.

The equipment inspection program Traylor Bros. devised to address machine quality problems has improved not only machine reliability, but also project safety and the profitability of project bids.

“Probably seven to eight years ago, we realized the quality of our equipment arriving on jobsites was not what we thought it was,” says Thad Pirtle, vice president of equipment at the Evansville, IN-based infrastructure construction firm. “Even small deficiencies would keep jobs from using equipment the way they intended to use it.”

Such deficiencies ranged from machines that wouldn’t start to a worn-out seat or windshield wipers not working.

“Problems were usually nothing earthshaking,” Pirtle notes. “But if you have to use a piece of equipment and it happens to be raining and the windshield wipers don’t work, it can prevent you from completing the task at hand.”

To ensure that equipment is ready to work when it’s delivered to sites, Traylor Bros. needed to inspect machines with an eye for all the possible work-stopping conditions before they shipped. And with big joint venture projects (bridges, tunnels, dams) spread all over North America, Pirtle knew they needed a routine inspection on the receiving end so that all parties could agree to the condition of a machine.

Accounting for Damage and Costs

Traylor Bros. wrote inspection procedures for each of the company’s machine types. Inspectors rate the quality of many machine conditions — paint, tires, glass, cutting edges, attachments, etc. — on a scale of one (not serviceable) to 10 (brand new).

“If I say the paint’s a five, it’s half worn out,” says Pirtle. “Sheet metal that’s a five has some dents and dings, but it’s still serviceable.

“We’ve gotten into training our mechanics and superintendents on how to inspect something,” says Pirtle. “What’s good and what’s not; how bad is bad, and how good is good.”

The project that shipped a machine is on the hook for the cost of repairing damage. Anything that’s not normal wear and tear gets charged back to the job where the machine came from.

Damage suffered in transit, or that evades attribution to a specific cause, gets kicked up to Pirtle’s office. He manages relationships — keeping communication open with project people — and focuses on assigning costs where they are incurred with a rigor motivated by nothing less serious than Traylor Bros.’ profitability.

The detective work is usually pretty simple. The nature of the damage and the quality of the inspections where the damage was discovered typically identify the cause.

“We had a crane come off a project with cracked track pads,” Pirtle points out by way of example. “The project superintendent said, ‘They were cracked when it came to us.’ He got out the inbound inspection report [from when the machine arrived on his site] and showed us.”

The report from the crane’s arrival noted the cracked pads for the first time in the crane’s records. The project superintendent avoided the cost of replacing the pads.

“It can be that simple,” Pirtle says. “It’s just in how well you do the inbound and outbound inspections.”

More importantly, the repair cost could be attributed to the specific work that cracked the pads.

“The job it had come from worked on some large rocks and broke the pads,” says Pirtle. “They didn’t catch it on the outbound inspection. Ultimately, equipment overhead has to handle the cost. It adds to the ownership cost, which adds to our rental rate. It was a cost of doing business in Hawaii on the island of Lanai, where they broke the pads.”

And that is one valuable result of Traylor’s equipment quality inspections. “We try to get the cost of equipment that’s beyond normal wear and tear associated with the cost of doing business in that particular area, or working in a particular fashion,” Pirtle explains.

Average is not Enough

Much of Traylor’s work is done in extreme environments — at sea, underground, bridging or damming rivers — that dramatically accelerate machine depreciation.

“It becomes a business decision. In order to get the job done, there’s a piece of equipment that’s going to get sacrificed. It’s going to be written down to zero or scrap value,” Pirtle states. “So your cost of ownership has increased.

If you combine both costs into one company-wide average — not assigning the steep depreciation specifically to underground work and bidding such future work at a higher equipment rate — you end up subsidizing the tunnel work with the above-ground work, says Pirtle.

Rent over-collected on easier jobs that subsidizes rent under-collected in extreme environments distorts perceptions of how profitable those jobs have been. Average cost estimates are too low to recover the likely cost and necessary margin associated with the risk of working in an extreme environment. Bids on extreme work tend to be very competitive. A company that wins the contracts must subsidize the expensive work with projects in benevolent environments where they can over-collect enough to subsidize the hard ones.

Inspections Boost Both Uptime and Safety

Traylor’s equipment quality inspection program has helped the company measure cost differences associated with varied working conditions. For example, Pirtle notes that maintenance costs working in a saltwater environment can be 15% to 25% more than working in the Midwest, or other more normal conditions.

“If you’re sending a crane to work in the Gulf of Mexico or Hawaii, you better have a three-coat paint system on it or you’re going to have to replace a lot of boom,” Pirtle points out.

Inspecting machines as they ship to and from sites has helped objectively measure the return on investment in things such as three-coat paint.

But Pirtle says improving safety (measured by a declining experience modification rate) and equipment uptime (rising 12% over the past 10 years) are the inspection program’s most compelling results.

“We have a lot less incidences of equipment damage today, especially on cranes,” Pirtle says. “We make a bigger deal out of lacing repair now through the inspection process. There needs to be a report filled out, so there is a paper trail — when did it happen; who was operating the crane; who was the foreman?

“Same thing with a piece of equipment, whether it has a bent fender or a cut tire — an incident report needs filled out,” Pirtle says. “It’s about accountability, and I think it’s helped raise awareness that reduces machine damage quite a bit.”

Visit the Profit Matters channel at ForConstructionPros.com for additional insights on the products and technologies, policies, approaches and strategies you can use to squeeze more profit out of every job.

Find out more about how Traylor Bros. equipment-quality program works and its impact on company safety on these pages at ForConstructionPros.com:

The Right Way to be the Lowest Bidder on Construction Projects