What Contractors Can Do, and Avoid, in Times of Crisis 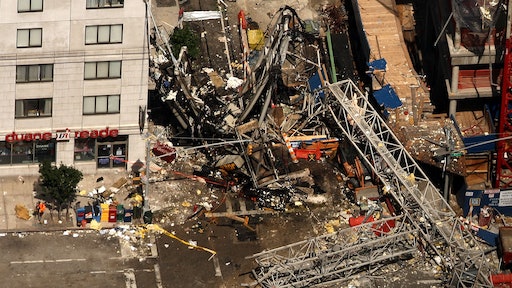 Lawsuits are inevitable in disasters like a 2008 Manhattan crane collapse that killed seven people and injured 24. But seeking forgiveness from victims mitigates long-term damage to a contractor’s reputation. The general contractor on this project quickly issued a public statement expressing sympathy to the victims’ families.

Contractors need to think differently about their response to accidents, unethical behavior or other missteps in which their companies are publicly implicated as a matter of the long-term survival of their businesses. Crisis-management expert James Lukaszewski says the effective approach to crisis management is rooted in actually asking for victims’ forgiveness.

Having helped hundreds of company leaders manage crisis situations for more than 40 years, Lukaszewski, chairman of the Lukaszewski Group, Bloomington, Minn., points out that, even a perfectly strategized response to a crisis, if poorly communicated, can compound damage to a company’s reputations well beyond the adverse events themselves. He identifies behaviors that fan the flames and should be avoided. He also recommends several essential actions.

An error or bad deed is inherently regrettable, but it is only a crisis if people, animals or living systems become victims through harm. Victim designation is the choice of those whose well-being or property are harmed, or those who appoint themselves to speak up for harmed animals or living systems. Company leaders’ actions during crises strongly influence this choice for better or for worse.

Several factors cause executives to mismanage victims during crises:

As a result, executives typically develop a mindset toward victims that is potentially harmful to their careers and their companies’ reputations. This mindset can trigger avoidable reactions to victims.

Over his career, Lukaszewski has identified predictably destructive patterns of executive behavior he calls “Profiles in Failure.” Component behaviors include:

Taking these steps quickly during a crisis shuts down the critics and makes your company much less interesting to the news media and social media. Moreover, crises are remediated more quickly, cost a lot less to resolve and are less prone to litigation. Executives who skip any of the steps or carry them out without sincerity will put their companies through much more trouble and probably won’t be around by the time the crisis is resolved.

Which Construction Drone Should You Deploy?

As your company scales, it’s common to experience setbacks; but with foresight, planning, and the right tools, you can mitigate potential setbacks so they don’t derail your business
June 4, 2018

10 Summer Construction Safety Tips — For You and Your Equipment

Summer’s a busy season for construction sites with no time for downtime. These safety tips will help keep your team and equipment healthy, safe and on the job.
Lonnie Fritz
July 15, 2020

Mobile internet and tablets put all the information to manage a construction project at a project manager’s fingertips, and allow them to communicate changes instantly
Nathan Medcalf
July 9, 2020
Follow Us