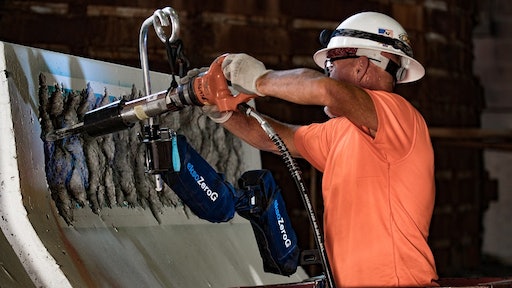 McCarthy Building Companies recognizes more than most construction contractors that making work easier on 40-and-over workers makes good business sense. Nick Cloud, Northern Pacific Division safety director, says that one of McCarthy’s biggest safety priorities is reducing the repetitive motion, cumulative trauma and musculoskeletal injuries to which older workers are particularly susceptible. With that in mind, the company has invested in tools that not only reduce the physical toll that concrete chipping and drilling exacts on workers but also helps them complete these tasks in about half the time.

A 2012 Center for Construction Research and Training (CPWR) study supports McCarthy’s position. The study explored the relationship between age and the cause, type and cost of construction injuries and found that:

One of those innovative technologies is the EksoZeroG, a mechanical arm that attaches to aerial work platforms or scaffolding and provides up to 35 lb. of lift for operating heavy tools like demolition hammers and impact wrenches (see a video demonstration of the EksoZeroG on YouTube at https://youtu.be/bW1jV3FyzfE).

McCarthy first used the EksoZeroG to demolish an incorrectly constructed concrete column on the ground floor of a new four-level, 608,687-sq.-ft., 1,778-car parking structure for the new Santa Clara Square Phase I campus developed by the Irvine Company in 2015.

That kind of work normally would have required two workers equipped with demolition hammers, Cloud says. On this project, one worker stood on an AWP alongside a scissorlift to which the EksoZeroG was attached and operated a demolition hammer. The scissorlift proved more stable than the AWP given the vibration.

“The individual tasked with performing this work has done it in the past, actually enjoys doing it and he was not initially a fan of changing the way he has always done it, so he approached it with a little reluctance,” Cloud says, adding that the worker barely broke a sweat and now would rather not chip concrete without the aid of the EksoZeroG. The job took half a day, compared with the full day it otherwise would have required. Also, by avoiding potential injury that might have resulted from unassisted chipping, McCarthy saved from $1,000 to as much as a six-figure number including litigation costs, Cloud says.

Projects requiring prolific drilling have about as much injury potential as concrete chipping because the physical stresses are similar. To limit drilling hazards and make work more productive, McCarthy uses another assistive technology: the Drill Boss by ErgoMek, LLC.

The Drill Boss was co-developed by Alan Barr, a principal development engineer in the University of California, San Francisco’s Ergonomics and Human Factors program (see a video demonstration of Drill Boss on YouTube at https://youtu.be/GPgNuLw9KOI). Either one or two drills can be mounted on the rig, positioned to drill in any direction and at varying heights and angles. The drill frame’s light weight suits AWPs or scissorlifts. The worker turns a wheel clockwise to make the rig telescope, positioning the drill bit to penetrate the drilling surface and turns the wheel counterclockwise to retract the bit from the hole. The rig, rather than the worker, takes all of the drilling vibration.

McCarthy first used the Drill Boss on the 500,000-sq.-ft. Bay Area Headquarters Authority (BAHA) Renovation and Seismic Upgrade project in San Francisco a few years ago. The eight-story building that previously served as a military tank assembly plant and post office was renovated and seismically retrofitted and now accommodates multiple government tenants. The retrofit involved making the exterior concrete walls thicker. To accomplish this, McCarthy needed to drill and epoxy nearly 30,000 holes for rebar that provided structural support for 14 to 24 inches of shotcrete.

Without tool-assist technology, McCarthy probably would have used a small army of workers for an undertaking like that, Cloud says. McCarthy contacted Barr, who was working on a drill rig for overhead drilling and asked his group if something could be developed for horizontal drilling. The contractor used several of the rigs, attached two drills to each and reduced the drilling team to a handful of workers.

Besides the tool’s ergonomic benefits, the workers were exposed to less silica dust because the Hilti drills they used were equipped with Hilti's hollow-bit dust-control system (more about Hilti's HIT HY-200 dustless drilling tool at www.forconstructionpros.com/10885367) and McCarthy with HEPA vacuums attached to the bits. “It was a significant win-win in terms of eliminating not only the hazards associated with drilling concrete but also the exposures to silica,” Cloud says.

Despite reducing the number of workers, McCarthy cut the drilling time in half. Rather than the two days that would have been required, the job was done in just a day.